At least 22 ships loaded with liquefied natural gas had been moored on Wednesday for more than five days around European regasification hubs, according to data from Kpler. The majority of the ships were centered around the Mediterranean Sea (11) and the Spanish province of Cádiz (6). 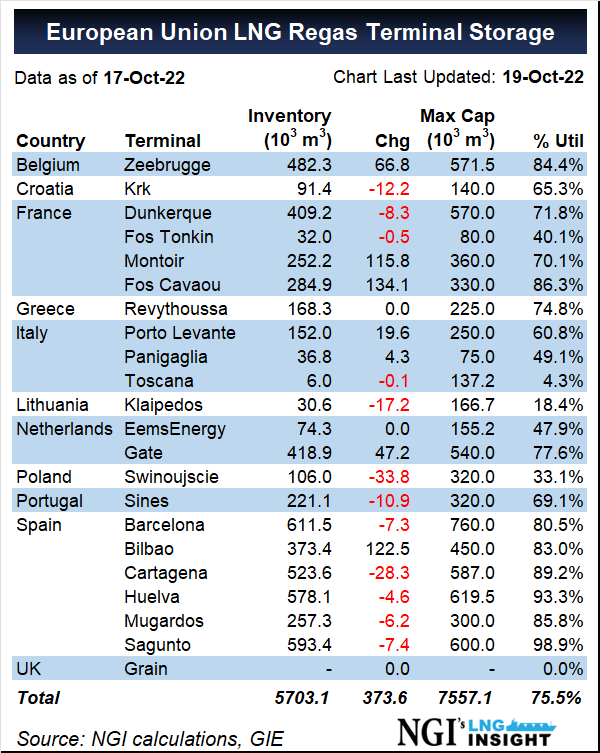 Kpler’s Charles Costerousse said the analytics firm had not seen this many LNG vessels floating around Europe since it began collecting data in 2018.

“Bottlenecks at European terminals can happen, but it is relatively rare and is typically due to weather issues or maintenance, and certainly not at this level,” Costerousse said.

The cause of the glut and how it may impact the destination of the cargoes “is quite tricky,” he said, since a vessel’s final destination and slot availability at terminals aren’t always known. However, the record volumes of LNG drawn to the continent could be causing “more congestion at ports likely due to slot unavailability.”

Many of Europe’s existing LNG import terminals are in Spain and Portugal, where gas is transported north via pipeline. Germany and other countries previously dependent on Russian gas have been investing in floating terminals that could increase import capacity as soon as early 2023.

Much of the gas currently floating offshore of Europe was procured from the United States, according to Kpler data, as Europe maintains its price premium over the Japan-Korea Marker (JKM).

The Dutch Title Transfer Facility (TTF) benchmark for gas in Europe reversed its weeks-long decline Thursday. Prompt TTF contracts had previously fallen in price by 50% compared to the start of the month on reports of high European storage and mild forecast.

The TTF price for gas in December closed Thursday at around $44/MMBtu, up from $39.273 on Wednesday.

Kpler expects Europe’s preparation for winter and its continued impact on prices to keep vessels anchored around its shores for the foreseeable future, Costerousse said.

“The current TTF/JKM spread still largely favors Europe as a final destination, so we expect these floating storage numbers to remain high for the coming weeks as European countries continue filling up their storage,” he said.
The idled vessels could also continue to drive up already record-breaking freight prices for LNG vessels. The price for a modern vessel headed to Europe rose to $475,000/day and $425,000 for a vessel headed to Asia. according to brokerage Fearnleys AS.

“As expected, the number of spot fixtures being concluded is less than usual going into winter, but the lack of tonnage available to those entering LNG’s busiest season short is warranting a huge premium,” analysts with Fearnleys wrote.