Natural gas exports, hammered by Hurricane Laura only days after reaching levels not seen since pre-Covid-19, were at the forefront of a steep decline in October forward prices during the Aug. 27-Sept. 2 period. The rest of the forward curve fared better, however, as the potential for further production decreases and stronger global demand this winter lifted prices, according to NGI’s Forward Look. 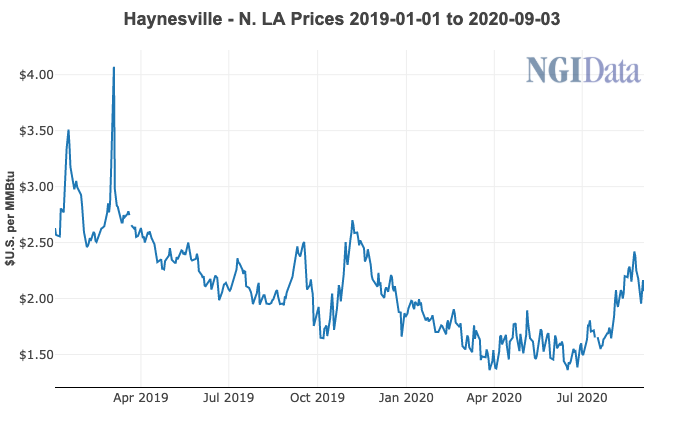 “We have seen wild volatility in natural gas prices each day” over the past week, Bespoke Weather Services said. The market finds itself in a “unique situation” in which the fundamentals are bearish at the front of the curve, but still bullish winter into Calendar 21.

Indeed, October Nymex futures have fluctuated in wide ranges of more than 10 cents on a daily basis over the past week. Daily price settles also have been erratic, with analysts finding little reason for some of the big moves experienced.

“We likely see volatility continue, as this is a paradigm we have not seen in the past, and leaves everyone unsure of where ‘fair value’ lies,” Bespoke said.

[In observation of the Labor Day holiday on Monday, Sept. 7, the next issue of NGI’s Daily Gas Price Index is being published on Tuesday, Sept. 8. Natural gas transacted on Friday, Sept. 4, will be for delivery on Saturday, Sept. 5, through Tuesday, Sept. 8.]

However, widespread power outages still remain in the region, according to the Department of Energy. Although Entergy Corp. had restored power to 62% of its Louisiana customers as of Friday morning, severe transmission system damage in and around Lake Charles and in Cameron and Calcasieu parishes prevents bringing power into the area.

“For customers to begin receiving power in the Lake Charles area, the transmission lines must be rebuilt. Those that received major damage may need to be fully reconstructed in parts,” Entergy said.

Entergy Louisiana expects to energize the first of its transmission lines into Lake Charles in mid-September. For the Lake Charles area, the utility’s “first and most critical priority” is to re-energize the first transmission source to begin the process of starting available generation units in the area. It has several options that it is currently evaluating based on feasibility and time to execute.

It could be mid-September before power is available to customers in the Lake Charles area who can safely receive it, and it may take longer to customers in inaccessible areas of the region, according to Entergy. “Initial estimates indicated it will take weeks to rebuild all transmission lines in Calcasieu and Cameron parishes. Until that work is completed, resumption of normal service could be limited.”

Cameron and Sabine Pass had not explicitly said as of Friday whether they had power.

“We have begun the process of safely mobilizing work crews and are in close contact with Entergy Louisiana, the waterworks district that serves Hackberry, LA, and the Lake Charles pilots regarding their restoration timelines, how we can assist their efforts, and how to minimize impacts on our timeline for the restart of Cameron LNG operations,” spokesperson Anya McInnis said in a update on Friday.

The uncertainty has delivered a gut punch to the market that had grown confident in increasing export demand amid Covid-19. Before Sabine Pass and Cameron shut down operations ahead of Laura’s landfall, total feed gas deliveries to U.S. terminals were back above 5 Bcf/d. Still about one-half the total U.S. export capacity, the deliveries are considerably more than the sub-3 Bcf/d levels this summer.

While Cheniere Energy Inc. has not released any information regarding its restart plans, the likelihood that Sabine Pass would be “at least partially up and running” when the market reopens Tuesday seems reasonably high, according to EBW Analytics Group. Once Sabine Pass fully ramps back up, feed gas flows could reach up to 3-4 Bcf/d.

“Even if the restart of Cameron continues to be delayed, as appears increasingly likely, this could bring total LNG feed gas flows to as much as 6-7 Bcf/d, reigniting the natural gas rally,” EBW analysts said.

As of Friday, feed gas volumes to the Gulf Coast terminals had inched up to 19,812 Dth, with flows showing up only on Cheniere’s Creole Trail pipeline.

Storage remains a going concern and threatens the front of the curve if builds ramp up over the final two months of the injection season, which ends Oct. 31.

On Thursday, the Energy Information Administration (EIA) reported a 35 Bcf injection that trimmed the stout surplus to the year-ago level. Although the reported build was seen as neutral, Bespoke said supply/demand balances were still loose enough to be quite “dicey” at the front of the Nymex curve, “while not invalidating any bullish winter case even if we do run into some containment issues.”

Broken down by region, Midwest inventories rose by 20 Bcf, while East stocks climbed 14 Bcf, according to EIA. The Pacific continued to withdraw given ongoing heat in the region, pulling out 2 Bcf from inventories. In the South Central region, nonsalts added 6 Bcf, while salts withdrew 3 Bcf. This resulted in a net 2 Bcf injection into inventories, EIA said.

The Schork Group analysts said the salt region reported the ninth delivery of the summer during the reference period, dropping inventories to an 18-week low of 331 Bcf, while the year/year surplus narrowed by 1 Bcf to 134 Bcf.

“In other words, you cannot swing a cat through the salts without hitting a molecule of gas,” analysts said.

Looking ahead, the reported draw in salts was, if not the last of the season, close to it, according to The Schork Group. Thus far, the market has delivered a light 41 Bcf of gas through the dog days of summer, which is lower than the normal delivery of around 55 Bcf.

Though not much was read into the latest report on the whole, more important will be the next several EIA datasets, according to Bespoke. The current pivot in near-term weather outlooks does not bode well for gas bulls who had expected injections to be smaller than normal. The latest weather models have moved into convergence in showing a “rather tame” demand pattern for the next 15 days, according to Bespoke.

The forecaster still favors a warmer regime into October, but for now, the above-normal temperatures in the outlook are mostly to the West.

There are still several moving parts that could throw October gas pricing off the rails in the coming weeks, but there appears to be more confidence in what the fair value is for contracts beyond the prompt month. Gas production, already well off late 2019 highs because of the oil market downturn, is set to decline further as rig activity has been slashed.

Enverus said the industry as a whole has not registered much of a recovery in drilling activity since the end of June. Even in the most active region, the Permian Basin, activity as of Thursday was down around 1% compared to June 30.

However, an improving gas price outlook has revived activity in the Haynesville Shale, while ongoing weakness in natural gas liquids pricing has led to further pullback in the Northeast, according to analysts.

During a second quarter earnings call, management for Goodrich Petroleum Corp. touted the improving gas price outlook as a reason to build its growing leasehold in the Haynesville.

On the opposite end of the spectrum, Appalachian pure-plays Antero Resources Corp. and CNX Resources Corp. said during their 2Q2020 earnings calls activity would remain subdued through most of the year.

Meanwhile, Gulf of Mexico (GOM) production is still down following Laura and Tropical Storm Marco, but it has shown improvement in the last several days.

Genscape Inc. said the storms resulted in maximum daily production impacts of 1.7 Bcf/d and curtailed nearly 18.8 Bcf/d of total GOM gas production over the past two and a half weeks. However, production has rebounded significantly since Aug. 28, with receipts on Mississippi Canyon, Discovery Gas Transmission and Transcontinental Gas Pipe Line nearing, and in some cases exceeding, their pre-hurricane rates.

“That said, significant recovery potential remains for the Destin and Nautilus pipelines, each of which are down 211 MMcf/d and 175 MMcf/d relative to Aug. 18, respectively,” Genscape analyst Preston Fussee-Durham said.

With respect to Destin, Genscape had not seen “a complete recovery” from the Delta House facility, however, receipts from the Okeanos receipt point remain depressed. For Nautilus, significant recovery potential remained for Ship Shoal volumes, with the Anaconda and Manta Ray facilities well below their pre-hurricane production rates.

With GOM production making up only a small portion of total U.S. output, the lower onshore production trajectory for the remainder of the year has been supportive of prices, especially since the decline is set to occur at the same time that global gas demand is projected to gain momentum.

Some analysts expect LNG exports to likely reach capacity of about 10 Bcf/d by the winter. The only disagreement appears to be the timing at which the acceleration takes place. Some see capacity ramping up through the end of the year, while others expect a sharp uptick as soon as next month.

“We’ve gone through the worst of it,” said Wood Mackenzie’s Alex Munton, principal analyst for Americas LNG. “I think clearly in terms of customers of U.S. LNG canceling cargoes because of the economics being unviable, that situation has changed.”

Poten & Partners’ Jason Feer, global head of Business Intelligence, said some growth already has been made because of improving price spreads. For example, the Freeport LNG terminal in Texas is scheduled to load 10 cargoes in September and 17 in October, which would be close to capacity.

However, Munton and Feer note that Sabine Pass and Cameron must come back online for U.S. output to reach capacity.