Global conventional and unconventional natural gas supplies will continue to escalate over the next two decades, with the United States accounting for 23% of market share in 2035, BP plc said Tuesday. 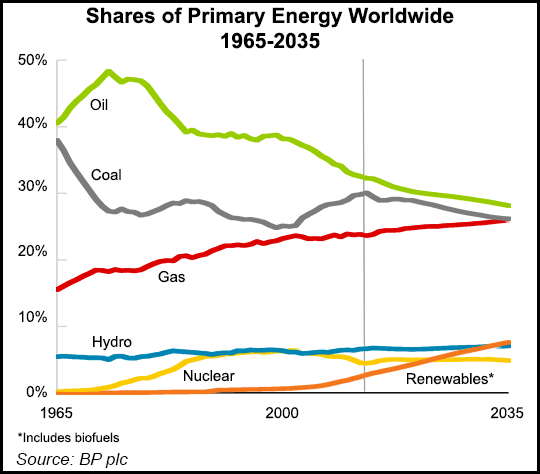 The United States also is forecast to remain the world’s largest liquids producer for the next 20 years, according to BP’s Energy Outlook 2035. The annually updated forecast on global energy trends is predicting that worldwide, energy demand should grow by almost 40%, an average of 1.4% a year, mostly from developing economies.

“After three years of high and deceptively steady oil prices, the fall of recent months is a stark reminder that the norm in energy markets is one of continuous change,” said Chief Economist Spencer Dale. “It is important that we look through short-term volatility to identify those longer-term trends in supply and demand that are likely to shape the energy sector over the next 20 years and so help inform the strategic choices facing the industry and policymakers alike.”

Fossil fuels still are responsible for most of demand over the forecast period, with gas capturing market share from oil and increasingly from coal. By 2035, all the fossil fuel shares are clustered around 26-28% with no single dominant fuel — a first since the Industrial Revolution. Fossil fuels in aggregate lose share but remain the dominant form of energy in 2035 with a share of 81%, down from 86% in 2013.

Roughly one-third of the increase in energy demand over the forecast period is provided by natural gas, another one-third by oil and coal together, and the final third by non-fossil fuels, such as renewables, hydroelectric power and nuclear energy.

Dale, who joined BP last October from the Bank of England, presented the outlook in London with Group CEO Bob Dudley.

The outlook is “our view of the most likely path, not our view of what we would like to happen,” Dale said.

The surge in gas supply, increasingly in the form of liquefied natural gas (LNG), will transform the market. By the end of the forecast period, LNG is expected to overtake pipelines as the dominant way to trade worldwide.

“The importance of LNG is that it’s mobile,” Dale said. “In the past, regions that are heavily dependent on imported gas have had to rely on pipeline imports. LNG opens up new sources of supply. This has major implications in terms of how gas prices are likely to be set across the world, with gas prices in different markets moving in greater unison.

“The overwhelming majority of the increase in traded gas will be met through increasing LNG supplies. Production of LNG will show dramatic growth over the rest of this decade, with supply growing almost 8% a year through the period to 2020. This also means that by 2035 LNG will have overtaken pipelines as the dominant form of traded gas…It’s the first time we’ve expected that.”

Gas is becoming the fuel of choice at an opportune time. Global gas demand is seen as the fastest growing of all the fossil fuels with demand rising by 1.9%/year. Gas is expected to meet as much of the increase in global energy demand as oil and coal combined by 2035, according to BP. Half the increased gas demand is expected to be met by rising conventional gas production, primarily in Russia and the Middle East. The other half mostly will be from North America’s unconventional onshore fields.

“By 2035, North America, which currently accounts for almost all global shale gas supply, will still produce around three-quarters of the total,” Dale said.

By 2021, the United States is predicted to be energy self-sufficient. It also should remain the world’s largest gas and liquids producer over the forecast period. According to BP, in the United States:

It’s easy to get caught up in the recent decline in oil prices, Dudley said. However, prices have been and always will be volatile.

“We’ve been spending a lot of time talking about the oil price in recent weeks, focusing on the here and now,” Dudley told the audience. The update offers “a good opportunity to lift our gaze and look further ahead. The outlook is based on detailed analysis by our economics team. It traces the most likely course for the world’s energy system over the next 20 years and therefore helps to guide the choices we make today.”

What BP economists “see over the longer term is a pattern of continuous change played out over a long wavelength. The volatility we are experiencing now is not some aberration, it is more the norm. Indeed, the period of stable high prices we’ve recently come out of was more the exception than the rule. We know in this industry that price shocks happen; we’re familiar with that…”

However, the industry has to plan for the long-term at the same time. “This is where you need a good understanding of the long wavelength changes and that’s what we look to the energy outlook to provide.”

North America’s gas demand by 2035 is forecast to grow to 118 Bcf/d, a gain of 29 Bcf/d, with the region accounting for 24% of global demand. The region’s gas market share also is expected to increase to 37% from 30% and lead oil and coal. By the 2030s, the United States alone “is likely to have become self-sufficient in oil, after having imported 60% of its total demand as recently as 2005.”

Meanwhile, oil demand still should grow steadily and remain the backbone of transportation fuels. The outlook projects that demand for oil will increase by around 0.8% a year to 2035. Most of the rising demand is seen from developing nations, with China likely overtaking the United States as the largest single consumer.

Although some prognosticators lately have predicted OPEC’s demise, the members’ influence will begin to increase again as U.S. shale oil supplies flatten in the 2020s, Dale said.

Coal’s demise continues over the forecast period and is projected to grow the least of the three fossil fuels.

“We expect to see a quite significant shift in coal,” said Dale. “In the next 20 years, we expect it to become the slowest growing fossil fuel, partly as Chinese industrialization slows and as a result of increasing environmental regulation. Another component is the plentiful supply of gas that we expect to see. We also expect significant growth in non-fossil-based sources of energy, with renewables standing out. We expect renewables to grow, on average, by around 6.5% each year, for the next 20 years. As a result, they will increase their share in primary energy from around 3% now to around 8% by the end of 2035.”

The global oil and gas trade is shifting in new directions, Dudley said.

“For oil, historically trade flows have been east to west — big oil producers in the east supplying big oil consumers in the west. But the strong growth in U.S. tight oil over recent years is having a dramatic impact. The flow is swinging around to go more from west to east and that swing is likely to get stronger driven by demand growth from China and India.” For gas, “the market is shifting from regional to global, particularly with the growth in LNG.”

Fossil fuels are expected to meet two-thirds of global energy demands by 2035. However, other energy resources “are growing fast from a small base, particularly renewables,” Dudley said.

The key driver in the evolution of the fuel mix is the power sector.

“Initially the domination of coal is losing to oil. Oil in turn was squeezed by nuclear, and more recently, the emergence of gas,” Dale said. “Over the outlook period, the most significant trend in the pattern is the decline in coal and the increasing share of renewables…By the end of the outlook period is the emergence of a more diversified portfolio of fuels in the power sector than we’ve previously seen. It’s a key driver in the clustering of fossil fuels.

“Another important feature of the outlook is the importance of growing new energy forms, such as renewables, biofuels, shale gas, tight oil, oilsands…” These energy forms…are boosted by new technology and higher energy prices. We expect that growth to continue.”

Based on BP’s interpretation of current policies and “intentions” by various political entities, carbon emissions still are expected to increase by 25% over the next 20 years from 2013 levels, Dudley said.

“A global carbon price would help to unleash market forces and provide the right incentives for everyone to play their part,” he told the audience. BP already uses a carbon price on the expectation that emissions at some point are going to be regulated (see Daily GPI, Dec. 5, 2013).