Liquefied natural gas (LNG) tankers en route to Asia are abruptly being rerouted to Europe to take advantage of wide premiums as prices on the continent again soared to new records on Tuesday. 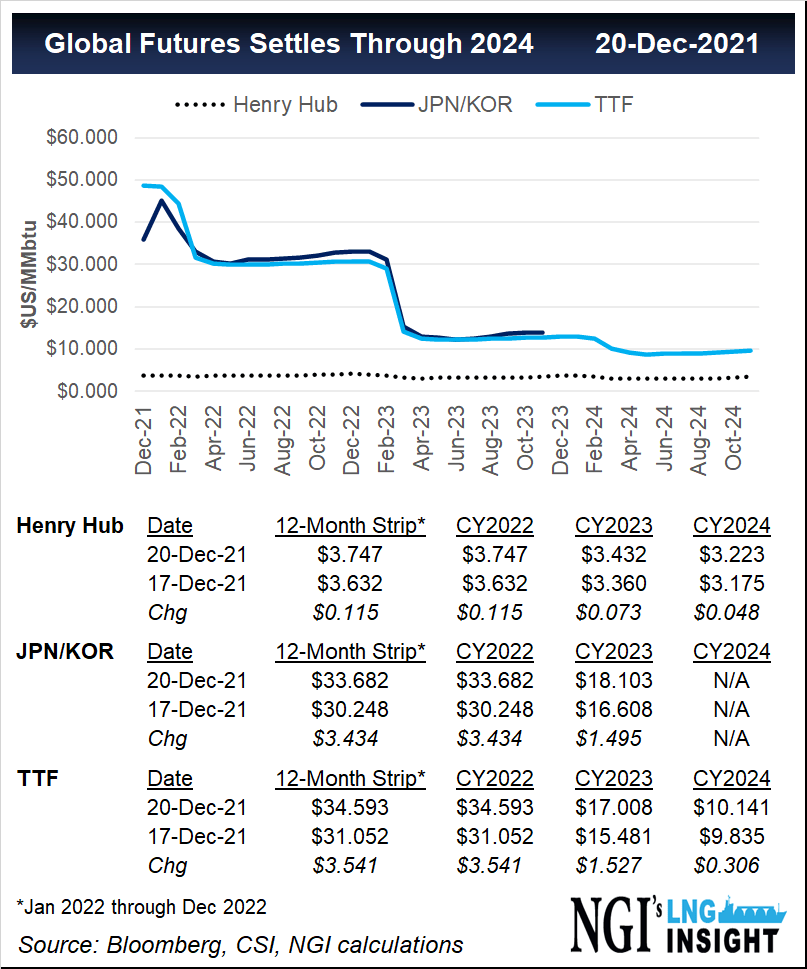 Analysts are watching nearly 10 vessels that have changed course as diversions have increased in recent days along with a rally in European prices. Europe’s leading natural gas benchmark, the Title Transfer Facility (TTF), jumped nearly $2 on Tuesday, when the January contract closed above $50/MMBtu, breaking the record set Monday.

Prices were again volatile Tuesday as January TTF swung to an intraday high of nearly $55. February prices finished at nearly $60, up by more than $11 from Monday’s settle. Bullishness again dominated trading after Russian gas flows through the Mallnow compressor station in Germany were halted and reversed. Flows through the Velke Kapusany entry point on the Ukrainian/Slovakian border also declined by about 5 million cubic meters.

“The decline was attributed to extremely cold weather in Northern Russia and the redirection of supply to fill the second string of Nord Stream 2 (NS2),” said Schneider Electric analyst Aidana Childebayeva. “However, speculation that the decline is targeted to facilitate NS2 approval are looming over the markets.”

Low storage inventories, nuclear outages set to start next month, low wind output and freezing cold temperatures this week have pushed prices higher. The bulls have dominated further down the curve as well after German regulators said last week NS2 would not be authorized for service anytime in the first half of next year. The pipeline is viewed as easing supply shortages on the continent.

“Shutdown of French nuclear capacity and lack of Russian gas flows are propelling the European energy crisis to new heights,” said Vortexa Ltd.’s Felix Booth, global head of LNG. “We have seen the typical winter LNG market structure reverse, with Europe being the most attractive market for flexible cargoes. Asia typically holds this title during the coldest months.”

Booth told NGI that in many cases LNG cargoes are “turning around in the middle of a voyage” and heading to Europe, where natural gas is fetching about $5 more.

LNG cargoes originating in the Atlantic Basin, such as the United States, are more frequently making their way to Europe. Asia has been the top destination for most of the year, helping to leave European inventories short.  According to NGI data calculated on Monday, cargoes lifted on the U.S. Gulf Coast were valued at $43.205/MMBtu in Europe after factoring in the cost of LNG, shipping fees and other expenses for the journey. The spread between the Gulf Coast and Asia was at $38.975.

Given the arbitrage opportunity, U.S. cargoes have had some interesting voyages in recent days, Booth said. After loading at Cove Point in Maryland, the Maran Gas Vergina was headed to Asia via the Suez Canal. But after it passed India on Dec. 17, the captain received orders to return along the same route back to Europe, according to Vortexa.

The Minerva Chios also loaded in the United States and was on a similar path before being diverted to Europe on Dec. 15. Also on Dec. 17, the Marvel Crane was bound for East Asia after loading in the United States, but the ship was pulled away just before reaching the Panama Canal and is expected to arrive at the South Hook LNG terminal in the UK just before New Year’s Eve, Booth said.

Another Atlantic Basin cargo loaded in Nigeria, the LNG Finima II was headed for China. But on Dec. 15, while in the middle of the Indian Ocean, it changed course toward Europe. Vortexa shows the ship declaring the Fos Cavaou LNG terminal in Southern France as its destination. Booth said the vessel is expected to arrive Jan. 5.

While LNG prices have soared, freight rates have declined sharply, particularly as Atlantic Basin cargoes have seen shorter sailing times to Europe versus Asia. That’s cut ton miles and softened demand for ships that aren’t being tied up as long.

Spark Commodities assessed freight rates in the Atlantic at $81,750/day on Tuesday, down 40% from its previous assessment late last week. Rates in the Pacific have also declined by 26% over the same time to $117,500/day. Those rates come after Spark reported record freight levels last month when more ships were headed to Asia to meet strong demand ahead of winter.