Following a record year of low prices driven by increasing liquefied natural gas (LNG) production in 2019, the global supply glut is likely to persist for at least another two years, according to the International Gas Union (IGU) in its annual report this week. 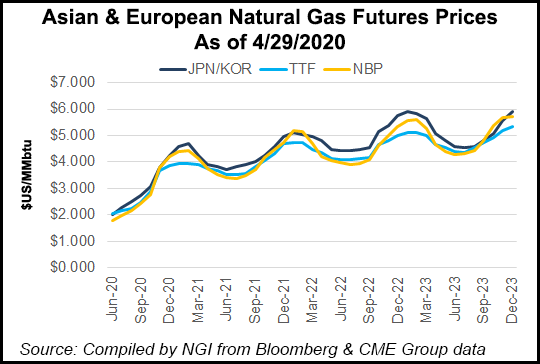 “This will mean continued depressed prices,” IGU said. “This is then likely followed by a period of recovery, with renewed uncertainty around the middle of the decade.”

Prices have been falling since last year, but have only recently hit record lows in key markets across the world as an abundance of supplies has permeated a market where demand has been crushed by the Covid-19 pandemic.

The first quarter “has proven to be very challenging for natural gas and LNG producers, as historically low gas prices have prevailed throughout the winter season,” IGU added. “First, the increase in LNG exports combined with a mild winter across the Northern Hemisphere led to a counter-cyclical drop in international gas prices. The bearish tone continued throughout February and March as markets around the world started to announce lockdowns in order to control the spread of the Covid-19 virus.”

IGU said the supply glut has mainly resulted from export growth in Australia, Russia and the United States, as well as Algeria and Egypt. Despite the outbreak’s impact on the global economy and energy demand, LNG supplies are poised to continue climbing this year, IGU said.

The global LNG trade increased by 13% year/year in 2019 to reach 354.7 million tons (Mt), the sixth consecutive year of growth. The United States led the way by adding 13.1 Mt of capacity last year, while Russia added 11 Mt and Australia added 8.7 Mt. The United States is now the world’s third largest exporter, behind Qatar and Australia, with Russia in the fourth spot.

“The record volume of sanctioned liquefaction projects is underpinned by the expectation of growing LNG demand globally, creating the need for additional liquefaction capacity,” IGU said. The group also noted that this would lead to increasing competition for engineering, procurement and construction contracts “as project developers aim to enter the market by the mid-2020s in order to capture growing demand.”

In terms of imports, Europe saw the largest increases last year, as the continent brought in 37 Mt more LNG than in 2018. The UK, France, Spain, Italy, Belgium and the Netherlands accounted for the largest increases. Sellers last year dumped cargoes in Europe, which has a healthy wholesale market, along with robust storage and regasification infrastructure, as they grappled with lower prices. IGU noted that global re-exports, or those that were first imported and then shipped to other countries, declined by 59% year/year as price differences between the Atlantic and Pacific basins fell.

The Asia Pacific and Asia regions remained the key centers of demand and together accounted for 70% of global LNG imports.

IGU said the use of floating storage regasification units (FSRU) are on the rise. FSRUs are a special type of ship, or offshore installation, used to transfer LNG. They provide flexibility in receiving and processing LNG shipments, particularly where such infrastructure doesn’t exist onshore.

As of February, IGU said of the 37 existing LNG import markets, 19 imported LNG with FSRUs, and six of those had onshore terminals as well.