There was a measure of calm in the liquefied natural gas (LNG) market on Monday following a week of oddities and record low prices across a world reeling from the coronavirus outbreak. 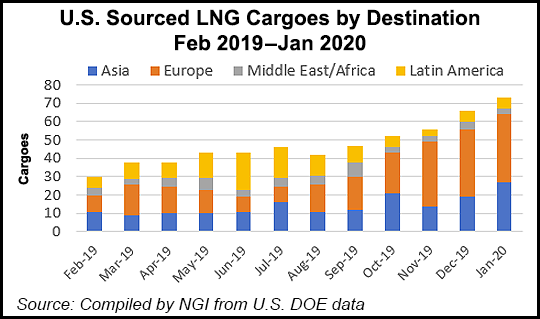 Asian spot prices were up by a dime Monday from a record low of $2.263/MMBtu on Friday, while the Dutch Title Transfer Facility spot month has bounced back in recent days from a low of $2.189 on April 1.

Lockdowns across Europe have taken a significant chunk out of demand. Wood Mackenzie noted last week that power demand in Italy, one of the hardest hit by the virus, had declined 27% year/year. However, the number of cases and deaths being reported across the continent is slowing, offering a lift to European equity markets and commodity prices.

“The prospects of the pandemic peaking in Europe will have implications on a potential energy demand rebound as well, reflected by gas and power prices rising across the curve,” said Schneider Electric analyst Balint Balazs in a Monday note. He added that European pipeline imports from Russia and Norway declined last month as wholesale prices have been trading near upstream breakevens, which has helped to ease surplus volumes.

In Asia, buyers that include India, which had been snapping up incremental cargoes, have been sidelined as measures aimed at curbing the outbreak limited manpower at import terminals and demand. Meanwhile, Japanese Prime Minister Shinzo Abe indicated that the country would declare a state of emergency in seven prefectures this week as cases have spiked. Chinese buyers have reemerged, however, as economic activity has bounced back, and prices in the region were somewhat stable Monday as others trolled for bargains.

Floating storage levels remained high Monday, with 14 flagged by data intelligence firm Kpler as floating with LNG aboard. That’s up from 11 at the same time last week, but down from a recent peak of 17 at the end of March when India began a three-week lockdown and buyers turned away cargoes.

Still, the outlook remains bearish as global demand is expected to remain weak and volumes are projected to continue growing, albeit at a slower pace. Suppliers, particularly those in the United States that have higher marginal costs are likely to feel the squeeze in the months ahead as forward prices are low too.

News hit last week that the largest U.S. exporter, Cheniere Energy Inc., had issued a tender to buy six cargoes for delivery to Europe later this year. The move was a rare one suggesting that one of the United States’ largest gas consumers could be testing the global market amid oversupply and possibly preparing to cut LNG output.

“A lot of people’s eyebrows went up when that tender came up,” said Poten & Partners’ Jason Feer, global head of business intelligence. “That’s a lot of gas; six cargoes is 420,000 tons.”

Bloomberg reported that Cheniere has awarded four of the six cargoes. Feer said the tender doesn’t necessarily mean the company will reduce LNG production in the months ahead. “The fact that they’re out buying could mean a lot of things,” he told NGI.

The tender could be one part of the company’s broader decision-making process. “There is no way to know for sure, but we can theorize, and it is sensible that they would take advantage of length in the market to effectively lower their shipping costs,” said Western LNG CEO Davis Thames, who formerly served as Cheniere’s CFO.

Buying the LNG could be cheaper than producing and shipping it in a number of ways. For example, Cheniere could buy LNG from a point nearer to the European destinations and deliver the cargoes with ships already under charter that are closer to the end market, cutting rates for vessels that would have to make costlier trips to lift farther away in the United States.

“I’d say this is the entire purpose of a trading book, to optimize and lower the cost of logistics on a day-by-day basis,” Thames told NGI. “…This is what they are supposed to do on a day-to-day basis, it is just that currently people are reading tea leaves to see whether exports” from the Gulf Coast will be shut-in.

Norwegian shipbroker Fearnleys AS said last week volatility in the market has kept traders busy as they try to capitalize on open arbitrage and other fluctuations in product prices. Fearnleys said the situation has created a “stop/start” LNG shipping market, where market participants “are constantly evaluating their options to either” add tonnage or sublet “depending on the latest price movements and trading opportunities.”

U.S. exports have remained strong throughout the market chaos. Nineteen vessels departed during the week ending April 1 carrying 70 Bcf of natural gas. That’s up from the 15 vessels that departed carrying 55 Bcf in the prior week, according to the Energy Information Administration.

In other developments, Cheniere asked the Federal Energy Regulatory Commission to place the Midship Pipeline into service by April 17. The 1.44 Bcf/d system would move gas from the Midcontinent to Gulf Coast and Southeast markets, including 75 MMcf/d for the Corpus Christi LNG export terminal in South Texas.

Uncertainty over the extent winter chills into the month of February put downward pressure on natural gas futures in early trading Tuesday. The February Nymex contract was off 5.6 cents to $3.971/MMBtu at around 8:50 a.m. ET. March was off 3.8 cents to $3.837. The European weather model shed heating demand from the outlook overnight…