A vessel carrying U.S. liquefied natural gas (LNG) arrived in China on Monday for the first time since March 2019 as trade restrictions between the two countries have eased. 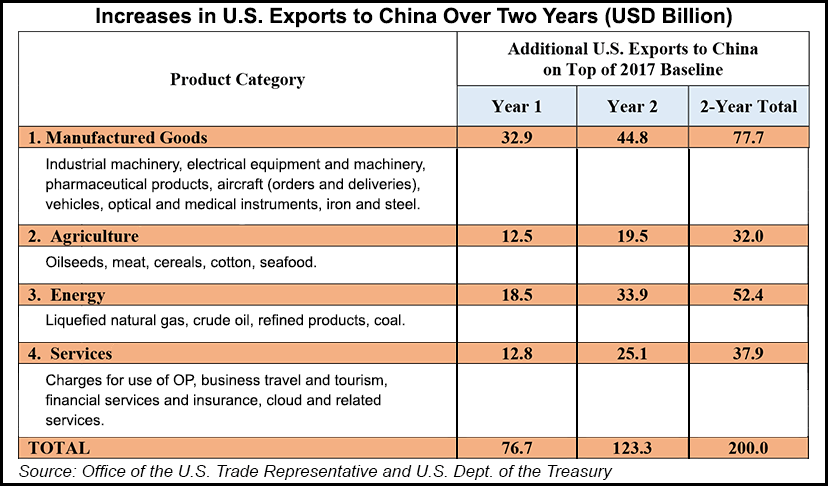 The Maran Gas Vergina, which departed Freeport LNG on March 21 and was reportedly chartered by BP plc, arrived in the port city of Tianjin and was moored there on Monday, according to MarineTraffic.com. Five other vessels were said to be headed from the United States toward China, ClipperData said last week, noting that two appeared to be taking a longer route and could be searching for a buyer.

The last U.S. LNG cargo discharged in China more than a year ago at China National Petroleum Corp.’s Jiangsu Terminal. China said in February it would offer tariff exemptions for hundreds of U.S. goods, including crude oil and LNG, as part of efforts to ease trade tensions. China began accepting applications from buyers for waivers of the 25% tariff on LNG imports in March following a first phase trade agreement that was signed earlier in the year. Some buyers in the country have also been more active as the economic impacts of the coronavirus have lessened.

News of the Greek vessel’s arrival was somewhat of a bright spot in the global gas market as the week got underway. As the pandemic has stretched on, prices continued to touch new lows. The Japan Korea Marker (JKM) hit another record low on Monday of $2.175/MMBtu, slipping below the previous low point on Friday of $2.186.

India has extended a lockdown through next month, while Japan expanded its state of emergency from a few prefectures to the entire country. Buyers from South Korea and Japan last week were reportedly discussing deferring cargoes through the fall as demand continued to suffer due to the impacts of Covid-19. In Europe, meanwhile, news reports said Spanish utility Endesa had canceled another two LNG cargoes for June and July that would have been lifted at Cheniere Energy Inc.’s Corpus Christi and Sabine Pass terminals on the Gulf Coast.

Prices at the Dutch Title Transfer Facility through the summer remain well below the $3.00 mark, which is also likely to squeeze profit margins on cargoes bound for Europe. Reports also surfaced late last week that traders have made record-low deals for cargoes that will be delivered to both Asia and Europe at or below roughly $2.00/MMBtu in the weeks and months ahead.

Oil prices continued to plummet during Monday trading as well, with the U.S. benchmark spiraling into negative territory and Brent crude slipping below $30 as stocks build and demand falls. If crude continues to drop and stays lower for longer, it could test the breakevens of some LNG producers with oil exposure.

Energy Aspects analyst James Waddell told NGI that oil-indexed prices in the second half of the year look very similar to “prevailing Northeast Asian spot prices and margins look very slim for the exporters who sell on an oil-indexed basis.”

He added, however, that those producers are likely to fare better than sellers transacting on gas prices.

An “S-curve” allows a contract’s price formula to change above and below certain crude oil prices. This helps mitigate the impact of high crude prices on the buyer, and low crude prices on the seller. Crude prices would also need to stay lower over a sustained period as oil-linked LNG is typically based on average prices over the previous three to six months.

Despite lackluster demand, U.S. feed gas deliveries have stabilized over the last week after Cheniere restarted Train 1 on April 12 after a roughly 10-day outage. It wasn’t clear if that was related to economics or maintenance, but feed gas deliveries had hit a three-week low before bouncing back above 8 Bcf/d when the train came back online.

U.S. LNG exports also increased for the week ending April 15. Seventeen vessels departed with a combined carrying capacity of 61 Bcf, according to the Energy Information Administration. That’s up from 12 vessels and 42 Bcf in the prior week.

In other developments, the Federal Energy Regulatory Commission has cleared Cheniere to place its Midship Pipeline into service. The 1.44 Bcf/d system would move gas from the Midcontinent to Gulf Coast and Southeast markets, including 75 MMcf/d for the Corpus Christi LNG export terminal in South Texas.

Midship posted notice on its electronic bulletin board that service was set to start on Monday except for its Iron Horse and Velma receipt points, which are slated to come online later in the month.

Elsewhere on the Gulf Coast, the Texas Commission on Environmental Quality issued an air permit to Annova LNG. Annova said it was one of the final permits necessary to begin construction of its 6.5 million metric ton/year (mmty) export facility at the Port of Brownsville. Annova is aiming to start construction on the project next year.