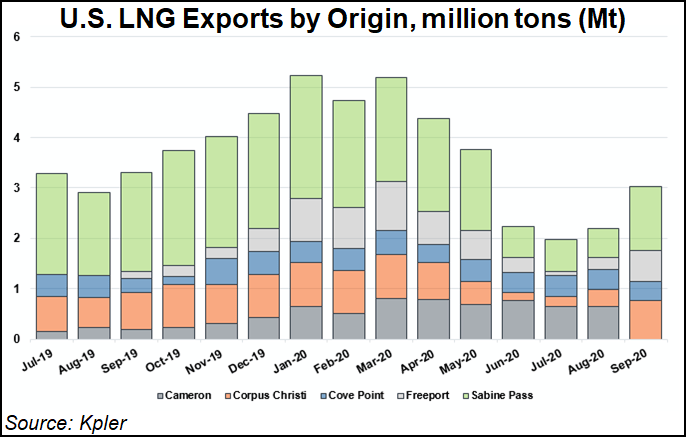 Cameron LNG, which was still ramping up following Hurricane Laura, opted to shut down before Hurricane Delta came ashore, but it sustained no damage from the storm. Sabine Pass LNG, also in Louisiana, continued to operate throughout Delta’s onslaught.

LNG feed gas volumes started to climb over the weekend and made a huge jump Monday. Deliveries to U.S. terminals shot up nearly 1.5 Bcf day/day to 7.04 Bcf and stood at 7.08 Bcf on Tuesday. Monday’s rebound helped push the November Henry Hub contract to $2.881/MMBtu, its highest since last year. Prices finished lower on Tuesday, settling at $2.855 as offshore production is rebounding and temperatures across the eastern United States are heating up.

However, LNG exports were still seen as a bright spot for the U.S. market as the week got underway. Cove Point LNG in Maryland is ramping back up after a three-week outage for maintenance. Feed gas deliveries at the 815 MMcf/d terminal were at 724.4 MMcf on Tuesday. Cameron LNG said Monday it was working with the Port of Lake Charles to assess the condition of the Calcasieu Ship Channel to confirm accessibility to the facility’s jetties. Feed gas deliveries to the terminal were at 651 MMcf on Tuesday.

Ahead of Delta, U.S. feed gas volumes hit their highest point since April on Oct. 7 at 8.5 Bcf after a summer in which more than 100 cargoes were canceled as prices overseas hit lows that disincentivized offtakers.

The market has tightened, however, with higher demand and better prices. Data intelligence firm Kpler said Friday U.S. LNG exports rebounded in September, increasing by more than 50% to 3.1 million tons (Mt) after bottoming out in July at 1.96 Mt. The surge came even as Cameron was offline for a month from Hurricane Laura.

“While the U.S. LNG September jump seems to be primarily driven by Asian demand, it is likely that more LNG could find a home in Europe as temperatures continue to drop” and the Dutch Title Transfer Facility (TTF) continues to rise, Kpler added, noting that TTF tripled during the third quarter. In Asia, the Japan Korea Marker (JKM) has followed European benchmarks upward and the market remains bullish. JKM gained last week and demand is strong as buyers continue to seek cargoes for the winter months.

Elsewhere in Europe, a 10-day strike among workers in Norway that shut down six of the nation’s oil and gas fields has come to an end. The market impact was partially muted as Equinor ASA said its Hammerfest LNG export plant, which was knocked offline by a fire late last month, would stay closed until Jan. 1.

The European Union (EU) parliament has also voted to strengthen its 2030 emissions reduction target to 60% from 1990 levels. The measure would also require each member state to be carbon neutral by 2050. Last week’s vote establishes the EU’s position as it heads into negotiations with its 27 member states and its executive branch, the European Commission.

In the United States, Venture Global Inc.’s Chief Commercial Officer Tom Earl reportedly said construction of the 10 million metric tons per year (mmty) Calcasieu Pass LNG project in Louisiana is proceeding on schedule with operations scheduled to start by early 2022. Earl was said to have made the remarks at Europe’s Energy Intelligence Forum. Texas LNG is also targeting a final investment decision later next year for its 2 mmty project under development in South Texas on the Brownsville Ship Channel, according to reports that quoted CEO Vivek Chandra, who spoke at another European event, the Flame natural gas conference.

Delfin Midstream also said Monday it has completed the front-end engineering and design (FEED) of its first floating LNG vessel for a project under development off the coast of Cameron Parish, LA. The 3.5 mmty vessel is the first of four expected. The FEED was completed in cooperation with shipbuilder Samsung Heavy Industries Co. Ltd. and engineering firm Black & Veatch.

The Delfin project is offering supply at 115% of Henry Hub prices plus a $2.00/MMBtu liquefaction fee for 20-year supply agreements and 10-year deals for 115% of Henry Hub plus a $2.40 fee. That compares to larger first wave export facilities that charged fees of up to $3.50. The project’s backers are also open to tolling structures under which buyers supply gas and pay liquefaction fees. Management said it continues to discuss supply deals with multiple buyers.