At least four LNG tankers are carrying U.S. cargoes to China for the first time in more than a year. 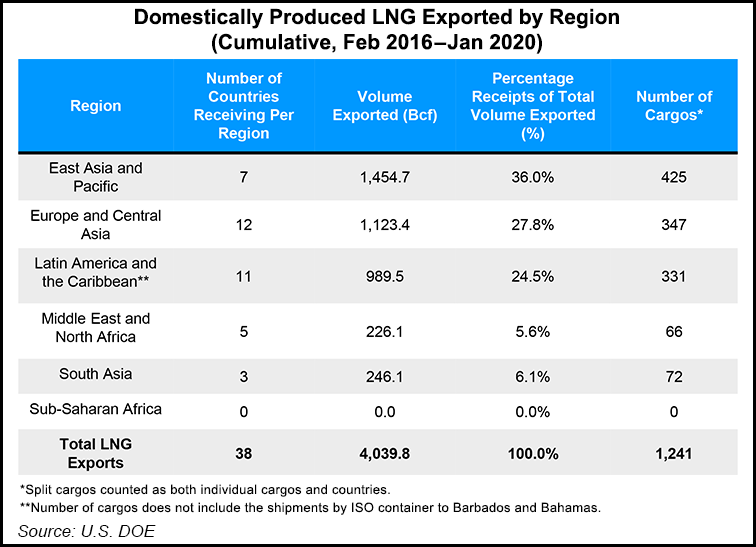 According to ClipperData, the vessels departed from three U.S. export facilities last month. But while two are taking the typical, more efficient route via the Panama Canal, the others are taking a longer route around the Cape of Good Hope.

“The vessels sailing around the Cape may still change their declared destination,” ClipperData said. “We believe the cargoes aboard these vessels are still searching for a home given that they were redirected from elsewhere. The longer route also indicates the shippers are giving themselves more time to find a buyer.”

The last U.S. LNG cargo discharged in China more than a year ago at China National Petroleum Corp.’s Jiangsu Terminal. The country is the world’s second largest buyer of LNG, with 61.7 million tons imported last year, or a 17.4% share of the global market, according to the International Group of Liquefied Natural Gas importers. Chinese buyers have also reemerged in recent weeks after they were sidelined earlier in the year by the coronavirus outbreak.

China said in February that it would offer tariff exemptions for hundreds of U.S. goods, including crude oil and LNG, as part of efforts to ease trade tensions. China began accepting applications from buyers in the country for waivers of the 25% tariff on LNG imports in March following a first phase trade agreement that was signed earlier in the year.

The week also got underway with news that the Organization of the Petroleum Exporting Countries (OPEC) and its allies have agreed to cut production by a record of nearly 10 million b/d. Analysts, however, said that might not do much to lift prices and ease the global oil surplus. Uncertainty over member compliance with the deal and high levels of spare capacity could lead “to lower for longer oil prices and a flatter Brent curve,” said analysts at BofA Global Research.

The slide in oil prices that began early last month due to a dispute between the so-called OPEC-plus alliance and Russia has weighed down both oil-linked LNG prices and oil-indexed gas under European pipeline import contracts, making them more competitive. The slide has also put export projects with oil exposure at risk.

The oil rout has come at a time when the world is awash in natural gas, which has forced global prices down and raised the specter of U.S. LNG shut-ins.

Genscape’s Allison Hurley, team lead of LNG and Proprietary Natural Gas, said the steep drop was mainly related to an ongoing train outage at Sabine Pass. “We can’t definitively attribute such an outage as an economic shut-in versus planned maintenance,” she told NGI. Hurley also said that predicting how long feed gas deliveries would remain weak or what other points in the year they might slide is difficult given the current state of the market with low prices and falling demand caused by the coronavirus.

The Energy Information Administration said last week that it recorded the lowest number of LNG tankers departing the U.S. since the beginning of the year. Twelve LNG vessels left with a combined carrying capacity of 42 Bcf during the week ending April 8. That compares to the 19 vessels that departed in the prior week carrying 70 Bcf.