Feed gas deliveries to U.S. export terminals plummeted to new lows on Monday, putting pressure on Henry Hub futures to start a month in which dozens of cargoes have been canceled. 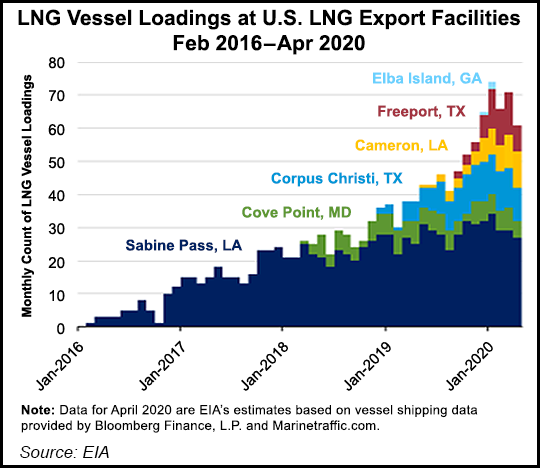 Pipeline deliveries to the liquefied natural gas (LNG) facilities slipped by about 2 Bcf day/day and Monday nominations stood around 4 Bcf/d based on the evening cycle for June 1 flows.

“This drop in feed gas flows, if it persists, could signal another major leg down in the market, since it could lead to a major further increase in the storage surplus versus last year and five-year average levels,” said analysts at EBW Analytics Group, adding that U.S. prices could drop to $1.50/MMBtu or lower later this month.

“These precipitous declines come after an end-of-the-month head-fake as LNG feed gas deliveries rebounded sharply off of last Sunday’s lows of 5.32 Bcf/d to weekly highs of just over 6.2 Bcf/d” last Tuesday and Thursday, Genscape analysts Preston Fussee-Durham and Allison Hurley wrote in a note to clients early Monday.

Roughly 130 U.S. LNG cargoes are expected to be canceled between May and October, according to one estimate from shipbroker Poten and Partners. About 30 of those would have been lifted this month before prices in key markets like Asia and Europe tanked, making it uneconomic to move the super-chilled fuel from terminals on the Gulf Coast and in Maryland overseas.

Genscape said cancellations at Cheniere facilities could be steeper. The company is the country’s largest exporter and biggest individual consumer of natural gas, the firm added.

“Interestingly, prior reports suggest Cheniere buyers will not lift at least 10 cargoes in the month of June,” the Genscape analysts said. “Based on an average load of 3.5 Bcf per cargo, this would represent a decline of 1.17 Bcf/d from contracted volumes — significantly less than today’s near 2 Bcf/d decline. While this number represents a minimum base case, if today’s declines are sustained, it is likely that actual cancellations are far greater. Alas, the great LNG pushback is upon us.”

The Energy Information Administration said last week that feed gas deliveries slipped to 5.6 Bcf/d on May 24 and averaged 6.7 Bcf/d from May 1 through May 26, or the lowest level since October 2019. Since then, baseload liquefaction capacity has increased by 2 Bcf/d.

Declining feed gas deliveries, EIA said, reflect not only a seasonal decline in LNG demand in Asia and Europe, but an overall decline in global energy demand caused by the Covid-19 pandemic and historically low LNG prices.

Even if Henry Hub prices fall in the near-term as EBW said is possible, they would still be above prompt prices at the Dutch Title Transfer Facility and the National Balancing Point in the UK, which are trading around $1.00. Prices across Europe are below $2.00, as storage is nearly 72% full, compared to a five-year average of 45%.

The situation there is also pressuring prices in North Asia, where the Japan Korea Marker spot price was at $1.938 on Monday, or well below recent highs of more than $2.00 as the market is oversupplied.

Market conditions are so weak that a cargo reloaded in Belgium is expected to be delivered to Sabine Pass on June 12 for import, according to a report from Bloomberg last week. The cargo could eventually be reexported as it would end up in storage tanks and reduce Cheniere’s liquefaction production requirements and the need for more feed gas, according to one source familiar with operations at the terminal.

U.S. exports increased slightly during the week ending May 27, when 12 vessels departed with a combined carrying capacity of 43 Bcf. That’s up from 10 vessels that carried 37 Bcf in the prior week, EIA said. EIA estimated that 40 cargoes were loaded between May 1 and May 24, amounting to roughly 5.8 Bcf/d. That’s compared to 7 Bcf/d that was exported over the same period in April.

In other news last week, Kinder Morgan Inc. received approval from federal regulators to add hot oil to moveable modular liquefaction system No. 10 at Elba Island LNG in Georgia. Six of those units are in operation at the terminal, and the company is working to bring the other four online this summer.