Asian and European natural gas benchmarks moved higher over the last week as winter buying heats up and supply disruptions in Australia, Norway and the United States persist. 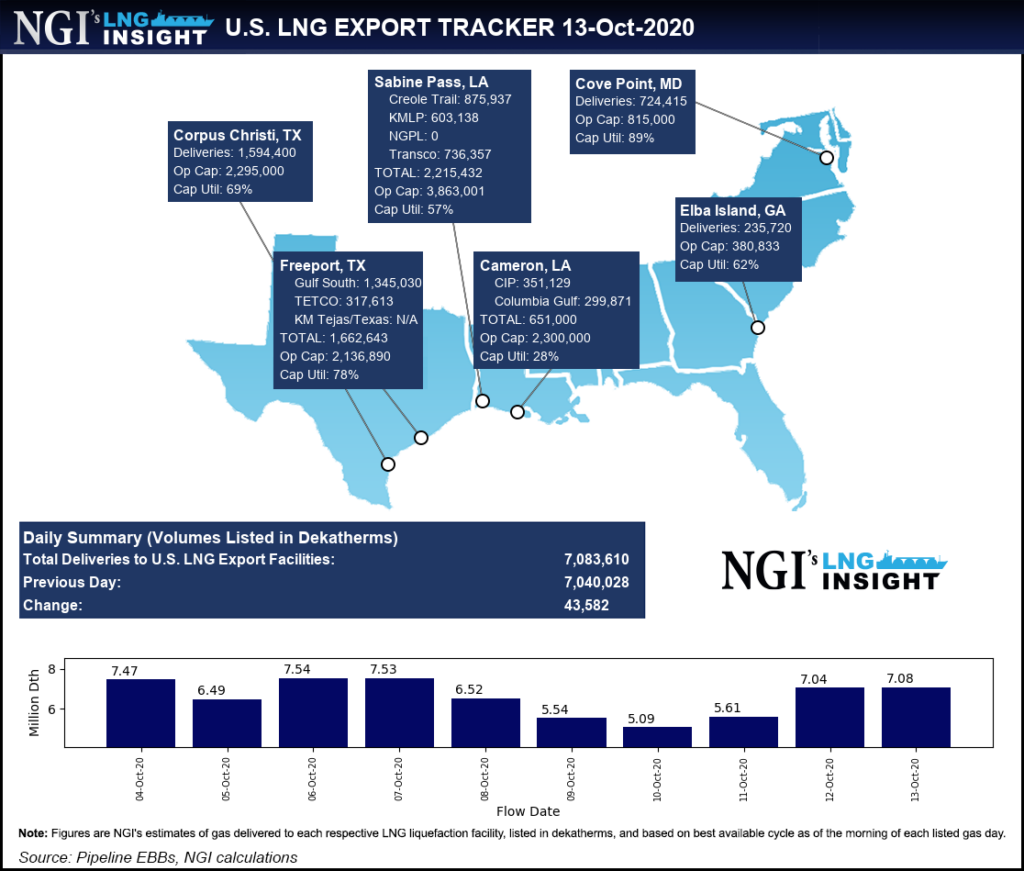 Asian spot prices remained strong Monday after hitting their highest point in about a year last week. Meanwhile, the front-month Japan Korea Marker contract was at $6.315/MMBtu on Friday. In Europe, the National Balancing Point and Dutch Title Transfer contracts also finished last week above $5.00 each, their highest point since last winter.

Tudor, Pickering, Holt & Co. (TPH) said Monday that European gas storage data shows withdrawals for each of the last five days, or two weeks earlier than normal in what the energy investment bank said is a potential bullish indicator for the global gas market.

“We expect the relatively tight balances are driven by reduced liquefied natural gas (LNG) imports, as U.S. shipments were interrupted by storms throughout the fall and Australian projects have been plagued by downtime, drawing cargoes away from the European market and into Asia,” TPH said.

The Asian and European markets are feeding off one another at the moment as supplies waver and demand jumps, but TPH analysts cautioned that European inventories will have to draw down far more than they’re currently modelling to avoid seasonal volatility in the spring that could again lead to cargo cancellations in the United States.

“While a bidding war between European and Asian buyers on the global LNG market remains a key bullish risk this winter, the ample stocks in European and Ukrainian storages combined limit the upside potential,” added Schneider Electric analyst Balint Balazs.

While LNG plant outages continue in Australia and Norway, the situation seemed to deteriorate further in the United States as the week got underway with word that a semi-submersible drilling rig had drifted into the Sabine Bank Channel and was preventing vessels with drafts over 32 feet from transiting the waterway. That means LNG tankers, which typically have a draft of about 40 feet when they’re fully loaded, can’t take volumes from Sabine Pass LNG.

According to ClipperData, the last vessel to load at Sabine Pass was the GasLog Gibraltar, which left the facility Oct. 16 with a draft of about 38 feet. Another vessel, the Palu LNG, has been berthed at the terminal since Oct. 15. There were two other LNG ships that appeared to be waiting near the terminal early Monday, the firm added.

Efforts were also still underway to clean up the Calcasieu Ship Channel, where a rock barge remains submerged and has limited vessel traffic to Cameron LNG. There is no timeline for when full operations might be allowed to resume on the channel. While the situation at Cameron remains “murky,” the U.S. Coast Guard allowed Panamax-size vessels with a draft of less than 36 feet to move up the channel in daylight hours, said EBW Analytics Group, noting that three LNG tankers are now sitting in the Gulf waiting to move to Cameron LNG.

The situation at Cameron and Sabine Pass has weighed on U.S. gas prices, which dipped early Monday before gaining on colder forecasts.

Pipeline deliveries to the terminals have remained stable over the last week at more than 7 Bcf even as Train 1 at Sabine Pass LNG is offline due to a small fire at the thermal oxidizer knockout drum on Oct. 11, according to a filing with the Federal Energy Regulatory Commission. Repairs are underway on the unit.

In other news, the Trans Adriatic Pipeline, which would move natural gas from Azerbaijan to Europe is completed and has been filled with gas. The line has been contracted for 1 Bcf/d and is preparing for commercial operations.

Royal Dutch Shell plc also said last week that full production at its floating LNG facility, Prelude, won’t resume this year. The vessel, which can produce 3.6 million metric tons of LNG per year, has been offline with technical issues since February.

Elsewhere, New Fortress Energy Inc., which is focussed on introducing LNG in markets that lack access to the fuel for power generation, has signed a memorandum of understanding with the Phillippine National Oil Co. to advance the development of infrastructure to supply natural gas for electricity generation.

Marine security firm Dryad Global also said over the weekend that the LNG tanker, Methane Princess, was attacked by pirates shortly after breaking off loading operations while berthed at Malabo, Equatorial Guinea. One crewmember from the Philippines was taken hostage, while two others were reported injured.