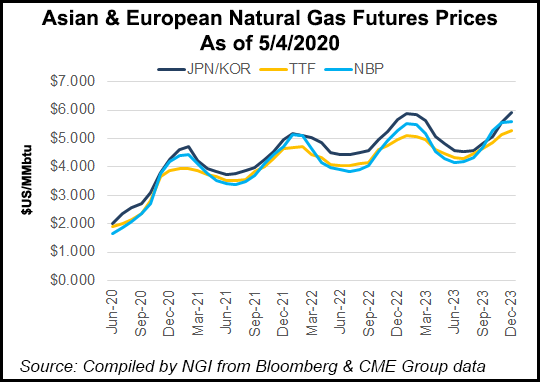 The company said given “current market dynamics” an FID on the 13.5 million metric tons/year facility is now expected in 2021. Sempra also operates Cameron LNG in Louisiana, while its Mexico unit is still targeting an FID this quarter for the proposed Energía Costa Azul export terminal in Baja California.

Sempra had been targeting a 3Q2020 FID for Port Arthur, but management warned in March that the oil rout and Covid-19 pandemic could force it to delay sanctioning. Sempra only recently signed a $8.9 billion fixed-price turnkey engineering, procurement and construction contract with Bechtel Corp. Site work is already underway to relocate existing infrastructure. The company has tentative supply and equity investment deals with an affiliate of Saudi Arabian Oil Co., aka Saudi Aramco, and an agreement to supply Polish Oil & Gas Co. Management continues to market the remaining volumes.

Monday’s announcement was the latest in a series of global FID delays in the LNG space as developers face challenges in securing supply agreements during the pandemic, which has helped decimate demand while pushing oil and gas prices to record lows worldwide.

Tellurian Inc., which continues to work toward sanctioning the 27.6 mmty Driftwood LNG terminal in Louisiana, noted in its first quarter earnings report on Monday that it has “not yet established an ongoing source of revenues sufficient to cover our operating costs and working capital needs.” The pre-revenue company has spent this year securing additional financing and slashing corporate overhead.

Going forward, the company said it would continue to tap the debt and equity markets to meet its financing needs until Driftwood is sanctioned. The project has yet to secure all the necessary long-term customers it needs to move forward. Tellurian reported a first quarter net loss of $40.7 million (minus 18 cents/share), compared to a net loss of $34.1 million (minus 16 cents) in the year-ago period.

“The start of commercial operations for Freeport LNG’s Train 3 marks the full commercial operation of our $13.5 billion, three train facility,” said CEO Michael Smith. “After over five-and-a-half-years of construction, which began in December 2014, we are thrilled to now have all three trains operating safely, and capable of producing in excess of” 15 mmty.

Kinder Morgan Inc.’s Elba Island LNG facility in Georgia introduced feed gas to its eighth liquefaction unit. The facility’s first cargo left late last year and all 10 of its smaller, modular liquefaction trains are expected to enter service by the end of the summer.

Eleven LNG vessels with a combined-carrying capacity of 39 Bcf left the United States during the week ending April 29. That’s down from the previous week when 13 vessels left carrying 48 Bcf, according to the Energy Information Administration.

Feed gas deliveries to U.S. export terminals continued to undulate last week, dipping at times below 6 Bcf/d from highs of more than 9 Bcf/d earlier this year.

Global gas prices continue to trade at parity, with key benchmarks in Asia, Europe and the United States well below $2.00/MMBtu. Prices have made it difficult for spot volumes to find a home, while long-term buyers are still expected to cancel cargoes from U.S. suppliers, and possibly others in the weeks ahead.

Low prices and a lack of demand as measures continue to stem the coronavirus outbreak worldwide have left more vessels floating with LNG aboard. ClipperData said Monday that 26 ships were floating, up from 25 a week earlier.