As oil prices plunged on Monday and sent global energy markets into turmoil, plenty of implications were seen for liquefied natural gas (LNG), including the possibility of higher prices for U.S. buyers and relief for offtakers overseas. 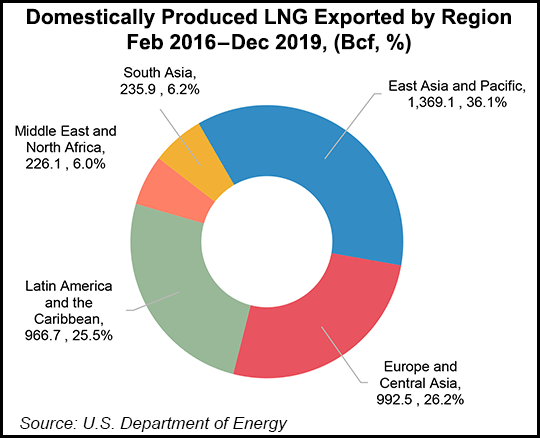 Crude prices fell by double-digits as a price war between Russia and Saudia Arabia, and the promise of additional supplies, jolted the global markets at a time when energy demand is threatened by the coronavirus outbreak. Buyers with long-term, oil-linked LNG contracts, under which most global purchases are still made, could see relief if crude prices stay low.

“Oil-indexed LNG prices are typically on a three- to six-month lag, so a sustained drop in oil prices will lower buyers’ import costs under oil-indexed contracts later in the year,” said Energy Aspects analyst James Waddell of the trailing averages crude-linked at which LNG prices are set. “It will also bring down the cost of oil-indexed gas under European pipeline import contracts with Russia and Algeria, with these typically indexed over six to nine months.”

“But this isn’t particularly good news for U.S. producers, everything else being equal, especially lower crude prices that are now below break-even throughout much of the Lower 48,” he said. “It probably means associated gas production declines in the United States. This could provide the double whammy of cheaper oil-linked LNG and incrementally higher Henry Hub prices.”

For now, oil-indexed LNG “still looks uncompetitive against the price of gas at European hubs or in the LNG spot market, even after today’s crash,” Waddell told NGI.

While Henry Hub prices steadied on Monday after nosediving to as low as $1.61/MMBtu early in the day, analysts said plunging crude could eventually provide a bullish lift for natural gas. If U.S. operators shut in oil production, that would cut associated gas output and possibly help lift gas prices.

Rau said that could prove problematic for U.S. LNG producers if domestic gas prices increase at a time when key European and Asian LNG benchmarks have hit historic lows. Abundant supplies and demand that has weakened with the coronavirus outbreak, officially named Covid-19, and a warm winter in the Northern Hemisphere have already narrowed margins and raised the specter of terminal shut-ins later in the year. U.S. offtakers need an overseas premium of just a few cents to lift cargoes economically.

Spot LNG prices in Northwest Europe on Monday also were still stuck below $2.50/MMbtu. Prices have firmed in North Asia as supplies have tightened, but also remain at lows of around $3.00.

Data intelligence firm Kpler noted late last week that Chinese LNG imports declined in February to about 4.2 million tons, down by about 210,000 tons year/year. Bloomberg New Energy Finance said it was the second consecutive month of import declines in the country, or the first time that’s happened in five years, “reflecting the impact of Covid-19 spread.”

Cases in Europe also are on the rise as Italy now has confirmed more than 7,000, while Germany and France each have more than 1,000 confirmed coronavirus cases. “The demand shock of Covid-19 and abundant gas supply is now compounded by the supply shock coming from crude markets,” Balazs said.

The bulk of U.S. LNG has made its way to Europe over the last year. The Energy Information Administration (EIA) recently noted that 55% of U.S. exports went to the continent between April and November 2019.

Meanwhile, U.S. feed gas deliveries continued to undulate as the week got underway. Genscape Inc. noted March 3 that pipeline shipments to export terminals hit their lowest point in weeks at 7.19 Bcf/d. They’ve largely hovered around that level since then, according to NGI’s U.S. LNG Export Tracker.

Genscape LNG analyst Amir Rejvani told NGI that there were full and partial outages on various trains at Cheniere Energy Inc.’s Sabine Pass LNG terminal last week. Storage inventories at the facility were near full when dense fog moved into the region and periodically shut shipping channels at Port Arthur. “Without any ships immediately available to load, there was simply nowhere for that gas to go,” Rejvani said.

Genscape’s Allison Hurley, who leads the LNG team, said the firm’s proprietary monitors detected additional operational outages at the terminal over the weekend. A single train remained offline on Monday.

“Scheduled nominations headed to the Sabine Pass facility are posted at 2.89 Bcf/d for today’s March 9 gas day — down roughly 30% from what we’d expect nominations to be when all five trains are fully operational,” she told NGI.

U.S. LNG exports decreased for the week ending March 4, according to the EIA. Fifteen vessels, including six from Sabine Pass, three from Freeport and two each from Corpus Christi, Cameron and Cove Point, departed with a combined carrying capacity of 53 Bcf. That compares to the 18 vessels that left carrying 69 Bcf in the prior week.

NextDecade is expected to make a final investment decision on the export terminal this year. If sanctioned, the project is targeting an in-service date of 2023. The facility would be located on a 984-acre site in the Port of Brownsville, TX, and would have a total export capacity of 27 million metric tons per year (mmty).

The Commission concluded that project construction and operation would result in temporary to permanent impacts on the environment. Most impacts would not be significant or would be reduced to less than significant levels with the implementation of recommended mitigation measures, FERC said.

Alaska Gasline Development Corp. is developing the project to export 20 mmty of natural gas produced in the Prudhoe Bay and Point Thomson fields on the North Slope.