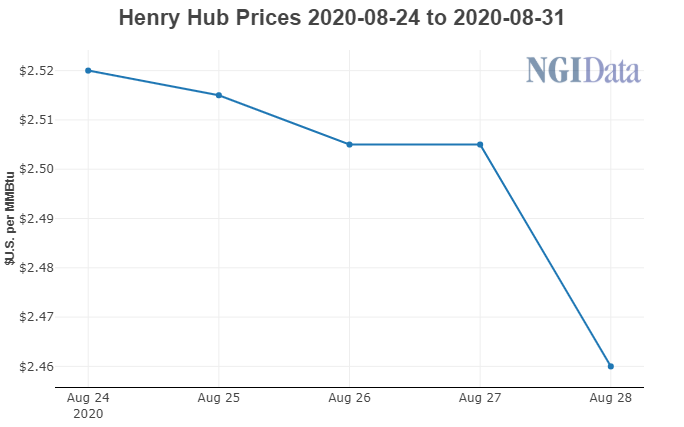 Both facilities were still offline on Monday. Sempra’s Cameron LNG took a direct hit from the storm, which came ashore packing 150 mph winds and was the strongest to hit Louisiana since the 19th century. The company said Monday that an initial assessment showed “minimal flooding and no catastrophic wind damage.” Once the site is safer, Sempra said it would conduct a more thorough inspection to determine the scope of restoration efforts and when it can bring the plant back online.

The storm missed Sabine Pass LNG by about a mile, but Cheniere said the facility performed as designed to withstand its impacts. A comprehensive assessment “revealed no significant damage.” Cheniere said it’s initiating the process to restart LNG production at the facility. The company has ramped volumes at its Corpus Christi terminal in South Texas to make up for losses at Sabine.

Cameron also said the site of its Port Arthur LNG project in Texas was unharmed by the hurricane, while other projects near the path of the storm such as Venture Global Inc.’s Calcasieu Pass site in Louisiana and Golden Pass, a project sponsored by ExxonMobil and Qatar Petroleum about 10 miles south of Port Arthur, also reported no significant damage, along with Freeport LNG in Texas.

When exactly Cameron and Sabine will come back online is unclear. Feed gas deliveries to U.S. export terminals fell to 2.68 Bcf on  Monday, down from an average of 4.33 Bcf/d in August before Laura hit, according to Genscape Inc. A force majeure issued last week ahead of the storm by the Cameron Interstate Pipeline (CIP), which feeds the terminal, was cancelled effective Tuesday. CIP said shippers “should be prepared to act on short notice.”

The decline in LNG demand has offset production losses from the storm and along with a cooler weather forecast was weighing on prices as the week got underway. Henry Hub futures were down sharply in early trading Monday. EBW Analytics Group said the key issue driving the U.S. natural gas market in the days ahead is “likely to be the status of Sabine Pass and Cameron” as any prolonged outage could drag down the October contract.

“Frankly, I would think the U.S. being offline now might bring U.S. gas prices down a touch,” said Jason Feer, global head of business intelligence at Poten & Partners, of the plant outages. “Sabine Pass is the largest single-point consumer of gas in the United States. With them down and Cameron down, that’s a pretty significant amount of gas that’s freed up for sale on the grid.”

U.S. export terminals have been running at reduced rates for most of the summer amid a global gas glut and less demand caused by the Covid-19 pandemic. Given that and the timing of Hurricane Laura, market impacts could have been much worse, Feer said. Hurricane season in the Atlantic Basin lasts until November. If a powerful storm were to arrive later in the year when demand is higher and offtakers are positioning cargoes for winter deliveries, it could have a greater impact on the LNG market.

“If you were to see a big storm that really does some damage and takes a lot of capacity offline later in the fall, that could leave some people caught out and having to scramble for cargoes,” Feer told NGI.

The last time a major hurricane hit the Gulf Coast in 2018, Sabine Pass and Cove Point in Maryland were the only U.S. LNG export facilities in commercial service in the Lower 48. There are currently four more facilities in operation.

The disruption in cargo loadings along the Gulf has also been pushing European prices higher along with French nuclear power plant outages announced last week and lower Russian pipeline flows. The European rally has helped to push up North Asian prices amid stronger demand for the super-chilled fuel there.

In other news, Blackstone Group Inc. has reportedly agreed to sell roughly 40% of its stake in Cheniere Energy’s limited partnership to Brookfield Infrastructure for an undisclosed price.

The exchange started trial operations on Friday on its online trading center. China National Offshore Oil Corp., China Petroleum & Chemical Corp., aka Sinopec, and Total SE were among those that participated in the trades, Bloomberg said. China is the world’s second largest LNG importer, where most of the fuel is bought on long-term contracts.

In Africa, Total signed a memorandum of understanding with the government of Mozambique to protect its 13 million metric tons/year LNG export facility under development in the country. Total said the MOU would provide a joint task force to ensure the security of Mozambique LNG, the nation’s first onshore LNG development. Militants attacked and killed eight contractors near the site in July.