The number of vessels floating with liquefied natural gas (LNG) aboard and waiting to discharge at terminals worldwide declined markedly on Tuesday. 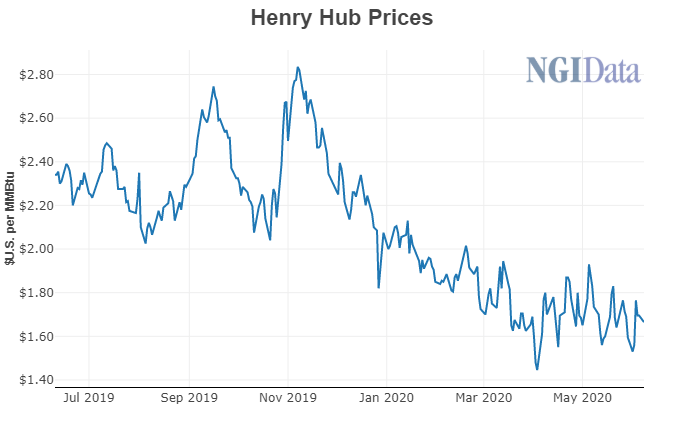 ClipperData showed 20 vessels floating, down from 23 a week earlier and a peak of 33 on June 19. Kpler had 13 vessels tagged as floating, compared to 20 at the end of last week. Estimates differ based on how firms define floating storage, which can include varying factors such as time at sea, speed of travel and direction.

Floating storage, an indication of global trade flows and the ability of sellers to find a home for cargoes, has been elevated this year given a ramp in supplies and a lack of demand caused by the Covid-19 pandemic.

LNG imports in Europe, a key market that’s been absorbing excess supplies, have been steadily declining, particularly as uneconomic U.S. cargoest have been canceled. Along with the use of excess storage capacity in Ukraine that has slowed injections and increasing gas-fired power demand, supply and demand balances are tightening on the continent.

The Dutch Title Transfer Facility and National Balancing Point are trading at a slight premium to Henry Hub after crashing in recent weeks, with higher-cost U.S. supply finally locked out of the market. UK-based consultancy Timera Energy said this week the pricing dynamics are a clear sign that U.S. gas is now driving European prices and influencing other markets given that flexible Lower 48 LNG deliveries are helping to ease the supply and demand imbalance.

In Europe, cheaper pipeline volumes from Norway in particular are helping to lock out U.S. LNG. European traders have also been utilizing excess storage in Ukraine, which was at 62% of capacity on Sunday.

Transmission system operator Ukrtransgaz warned last week that it would need to conduct maintenance from August through October on the Budnice interconnection, a critical outlet for moving gas from Slovakia to Ukraine. However, Slovakia’s system operator Eustream said Monday it would offer capacity at another exit point into Ukraine, alleviating the maintenance constraint, albeit at an additional cost for traders that have already booked capacity on Ukraine’s system.

Asian spot prices were also kept at bay on Tuesday as buyers were more interested in cargoes later in the year. Futures prices remained subdued too, with NGI calculations showing U.S. cargoes out of the money until September, or into January for those without chartered vessels.

U.S. LNG exports again decreased for the week ending June 24, when seven vessels departed with a combined-carrying capacity of 25 Bcf, down from eight vessels that left with 29 Bcf in the previous week, according to the Energy Information Administration.

Feed gas deliveries to U.S. terminals continued trending above 4 Bcf on Tuesday after dipping below that mark last week, according to NGI’s U.S. LNG Export Tracker. Henry Hub also continued to rally Tuesday from a 25-year low last week when it settled at $1.482/MMBtu. High storage levels and a decline in natural gas demand, specifically LNG exports, have held the benchmark down.

Still, the latest weather data on Tuesday showing strong heat through the first half of July lifted the August contract.

In other news, Delfin Midstream has asked FERC for more time to complete and place into service onshore facilities to deliver supply to the floating LNG (FLNG) export project under development offshore Louisiana. The company has requested that the deadline be extended by one year to Sept. 28, 2021. The Federal Energy Regulatory Commission previously granted a similar extension.

Delfin executives recently told NGI that the company plans to reach a final investment decision by next year on the first of four FLNG vessels.

FERC has also authorized Cheniere Energy Inc. to introduce gas and commission the third train at its Corpus Christi export plant in South Texas. Train 3 is expected to come online in the first half of 2021 and bring the facility’s production capacity up to 13.5 million metric tons/year.