Feed gas deliveries to U.S. export facilities remain at some of their lowest levels of the year after they fell below 6 Bcf/d early last week as the global gas glut has pushed prices lower and led to more cargo cancellations. 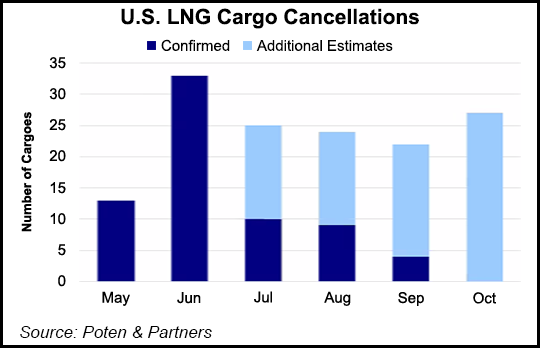 Pipeline deliveries to liquefied natural gas (LNG) terminals have hovered at or below 5.5 Bcf/d for more than a week now, according to NGI’s U.S. LNG Export Tracker. Kinder Morgan Inc. reported a fire on a mixed refrigerant compressor at its Elba Island LNG facility that shut down three liquefaction units, but the outage wasn’t expected to have serious impacts as the terminal has the capacity to fill only three cargoes per month.

Twelve U.S. cargoes have been canceled this month while another 33 are expected in June, according to ship broker Poten & Partners. Twenty-five cancellations are expected in July and more than 20 are expected in each month from August to October given the uneconomic spread between the United States and key markets overseas.

“These numbers will still be high through August, September and October, with October peaking out at about 27 cancellations,” said Poten’s Kristen Holmquist, forecasting manager, during a webinar last week. “Cancellations could be higher. In our supply and demand balance we still show a little bit of excess supply, so there might even be more LNG taken out.

“A lot depends on how demand recovers in different economies and what kind of flexibility we see outside the U.S. in terms of supply.”

While spot prices have improved in Asia where supply has tightened and consumption is slowly rebounding, floating storage still remains elevated across the world in an indication that demand remains low due to the Covid-19 pandemic.

India, which introduced a highly restrictive lockdown on March 25, has extended those measures through May 31 as cases have increased there. Prices in Europe also remain weak regardless of steps to ease lockdowns across the continent. While industrial and power demand is expected to increase, residential consumption is poised to decline with above normal temperatures forecast.

Rystad Energy said Monday that it expects global natural gas demand to decline 2% in 2020 as commercial and industrial demand falls due to Covid-19. The firm expects gas demand to finish at 3.88 trillion cubic meters (Tcm), down from about 3.96 Tcm last year. Before the outbreak, Rystad expected demand to grow to more than 4 Tcm.

“2020 will be the first year since 2009 where there will be no growth in consumption” said Rystad’s Carlos Torres-Diaz, head of gas and power markets. “This will be a hard blow for an industry accustomed to yearly growth rates of more than 3%.”

The Energy Information Administration reported a decline in U.S. LNG exports for the week ending May 13, when 11 vessels departed carrying 40 Bcf, compared to 15 vessels and 54 Bcf in the prior week. Given the market conditions, exports have been trending slightly lower in previous weeks.

Even still, Sempra Energy said Monday the third and final train of Cameron LNG’s first phase has started producing LNG, bringing total U.S. export capacity above 10 Bcf/d. The third train at the facility in Hackberry, LA, is on track to enter commercial operations under its tolling agreements in 3Q2020.

An expansion is also planned that would add another two liquefaction trains and boost the terminal’s overall output to 1.29 Tcf/year.

In other U.S. news, the Alaska Journal of Commerce reported last week that the state corporation advancing the $43.4 billion Alaska LNG project is in search of a new sponsor. The Alaska Gasline Development Corp. board reportedly hopes someone else can take over the project if an economic analysis currently underway finds it is still economically feasible.

As designed, Alaska LNG includes a three-train liquefaction plant in southcentral Alaska at Nikiski, an 807-mile pipeline to move gas to the facility, a North Slope gas treatment plant and facilities to connect the Prudhoe Bay gas complex to the treatment plant. Without another sponsor, the publication reported, the state corporation would likely sell the project’s assets, such as permits and engineering work.