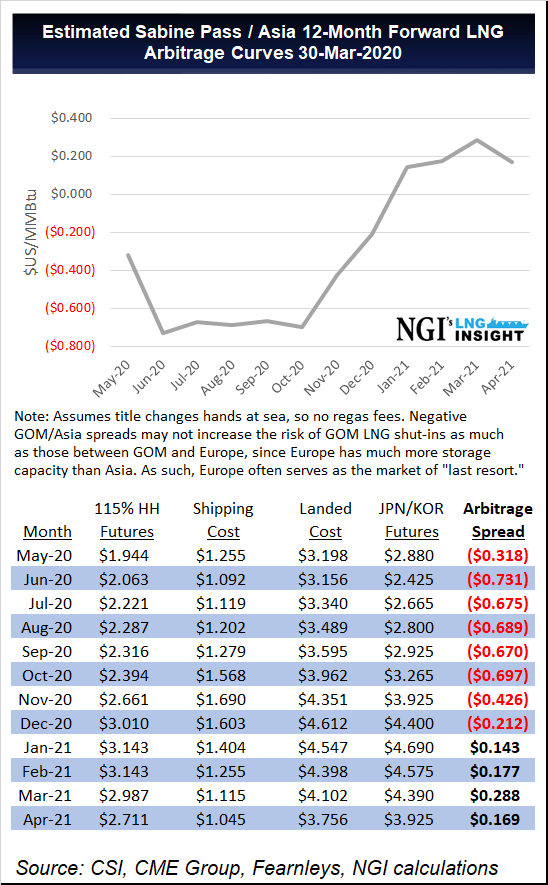 In Europe, which has been battered by the outbreak, the Dutch Title Transfer Facility prompt-month cratered to $2.23, setting yet another record low on Monday.

The pressure was on in the United States too as the outlook for economic activity and gas consumption has weighed heavily on Henry Hub, with the May contract stuck around $1.60. The forward curve doesn’t look better for any of the global gas benchmarks through the summer.

Crude prices also continued giving up ground, with Brent hitting its lowest point in nearly two decades and West Texas Intermediate dropping below $20/bbl during Monday trading. Brent-linked LNG prices, assuming a 17.2% slope, were at $3.91 on Monday, compared with about $12.00/MMBtu at the same time last year, according to NGI calculations.

Asia could benefit from lower crude prices, where roughly 70% of the LNG trade is oil-indexed. There’s a glimmer of hope in China, where IHS Markit said Monday it expects power demand to trend upward for the remainder of the year as many sectors and businesses have reopened.

Electricity consumption declined by nearly 8% year/year during January and February, when China was the first to take drastic steps to curb the impacts of Covid-19. IHS noted Monday that more than 90% of the country’s markets and malls have reopened, while more than 70% of small- and medium-sized businesses have done the same.

Bloomberg reported last week that an LNG cargo departed Sempra Energy’s Cameron LNG facility on March 21 headed to Tianjin, China — the first shipment from the U.S. since early last year. China said in February it would offer tariff exemptions for hundreds of U.S. goods, including crude oil and LNG, as part of efforts to ease trade tensions.

Meanwhile, the force majeures in India aren’t expected to impact U.S. export facilities yet. Gail Ltd., Gujarat State Petroleum Corp. and Petronet Ltd. all reportedly issued notice that they couldn’t take volumes. Gail has 20-year contracts to buy LNG from both Cove Point in Maryland and Sabine Pass in Louisiana.

After talking with Sabine owner Cheniere Energy Inc., Tudor, Pickering, Holt & Co. (TPH) analysts said last week in a note to clients that they feel confident the company’s take-or-pay contract with Gail would help insulate it, as any force majeure was likely to be unsuccessful. Given the nature of the contract, TPH said, “country specific issues such as India’s nationwide shutdown are not grounds for force majeure, and it would likely take an extended weather issue in the shipping channel, or similar event, to justify a claim.”

Indeed, force majeures declared by Chinese buyers earlier in the year weren’t accepted by companies such as Royal Dutch Shell plc and Total SA, but they bought time to better manage incoming deliveries.

As market conditions have deteriorated, a variety of LNG projects across the world have been impacted. Australia-based producer Santos cut its 2020 budget and deferred a final investment decision (FID) on the Barossa gas field offshore Northern Australia. The field was slated to feed the Darwin LNG plant, where supplies are expected to be depleted from another field in 2022. Woodside Petroleum Ltd. also said it would cut capital spending by 50% and delay an FID on an expansion at its Pluto LNG facility.

Other projects including LNG Canada, Woodfibre LNG and Rovuma LNG, to name a few, have been impacted by workforce issues, delays in receiving equipment for construction or possible FID deferrals because of the coronavirus. LNG Ltd.’s funding was canceled, forcing the Singapore-based company that wants to take it over to line up financing. Shell also pulled out of the Lake Charles LNG project in Louisiana, citing market conditions.

U.S. LNG exports were stable for the week ending March 25 as 15 vessels departed with a combined carrying capacity of 55 Bcf. That compares to 16 vessels that left the prior week carrying 59 Bcf, according to the U.S. Energy Information Administration.

In other news in the United States, the Federal Energy Regulatory Commission granted Sempra a four-year extension to complete an expansion at the Cameron LNG export terminal in Louisiana. The expansion would add two more liquefaction trains, another LNG storage tank and related facilities. The company requested the extension after Total in 2018 acquired French utility Engie SA’s interest in the facility and slowed the project down.