A spike in coronavirus cases in some parts of the world was again pressuring commodity prices Monday as concerns over energy demand persisted. 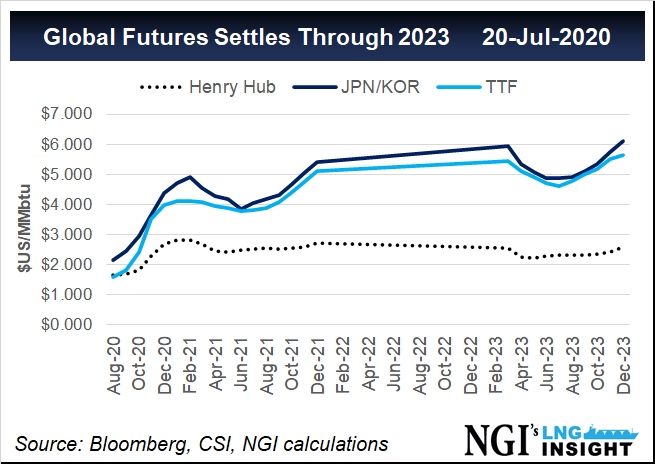 Oil moved lower as the week got underway, but gained slightly with the Brent September contract finishing at $43.28/bbl. In the United States, natural gas prices failed to rally last week even after a bullish storage report and a forecast that called for some of the summer’s hottest weather.

The week started with a steep sell-off. The August Nymex contract declined 7.7 cents day/day and settled at $1.641/MMBtu. Futures were off more than 10 cents for a stretch of the trading day. September fell 8.1 cents to $1.684.

Meanwhile, front month European hub prices continued to trade near Henry Hub as ample supplies on the continent are keeping a lid on prices. European storage was at 84% of capacity on Saturday. While Russian volumes moving into the continent declined last week as maintenance on the Nord Stream pipeline started, Norwegian production increased along with higher North African volumes that moved into Spain and Italy, according to Tudor, Pickering, Holt & Co.

ClipperData said last week that the number of floating vessels loaded with LNG across the world reached 29, near a record of 32 set in June. ClipperData’s Kaleem Asghar, director of LNG analytics, told NGI Monday that the number had fallen to 26, with 16 of the ships floating in North Asia, where prices have remained flat on a lack of demand.

U.S. LNG supply continues to respond to the weak market. The Energy Information Administration said that just four vessels departed the country between July 9 and 15 with a combined carrying capacity of 15 Bcf. EIA noted that it was the lowest reported export volume since 2016, when only Sabine Pass was in operation with two trains.

Feed gas deliveries to U.S. terminals dipped below 3 Bcf/d earlier this month as more than 100 cargoes have been canceled between June and August due to weak prices overseas. Deliveries have bounced back over the last week and were at nearly 4 Bcf/d on Monday, according to NGI’s U.S. LNG Export Tracker.

A bright spot might be in the forward curve, however, as gas prices in both Asia and Europe are expected to increase later in the year on winter demand. UK consultancy Timera Energy said Monday that Dutch Title Transfer Facility (TTF) forwards have risen around 15% since May, with “a very steep curve contango” that’s up 250% over the next six months. TTF is a dominant benchmark in Europe.

Citigroup also said in a recent note that it expects TTF to average $3.90/MMBtu in 4Q2020, while the Japan Korea Marker should average $4.10 during the period. That’s compared to the bank’s $2.80 forecast for Henry Hub, suggesting better days are ahead for American exports if the forecast holds up and premiums can be had overseas.

In other developments last week, FERC authorized Kinder Morgan Inc. to bring the seventh liquefaction unit online at its Elba Island export terminal in Georgia. The other three units at the facility are expected to come online by the end of the summer.

In Canada, Pieridae Energy Ltd. reported another setback for its proposed Goldboro LNG export plant in Nova Scotia after KBR Inc. said it would not provide a fixed-cost contract to build the facility. Pieridae delayed a final investment decision on the facility in April due to the pandemic.

Pieridae said KBR is in violation of an agreement signed last year and is reviewing its legal options. In June, KBR said it would exit the energy business, leaving a handful of North American LNG projects to seek out new contractors.

Overseas, Total SE signed a $14.9 billion senior debt financing agreement for Mozambique LNG. Financing for the country’s first onshore LNG facility was clinched at a challenging time for the LNG market as the supply glut and Covid-19 have complicated sanctioning as well as funding for projects and expansions.

Total said the financing was “the biggest ever in Africa.” It includes direct and covered loans from eight export credit agencies, 19 commercial banks and a loan from the African Development Bank.

With a 26.5% stake in Mozambique LNG, Total would operate the facility. The $20 billion project was sanctioned one year ago. It includes developing the Golfinho and Atum fields offshore Mozambique and constructing a two-train liquefaction plant with a planned capacity of 12.9 million metric tons/year.

Elsewhere, Israel’s government approved a $6 billion pipeline to move natural gas from the eastern Mediterranean to European markets in Greece and Italy. The 1,181-mile Eastmed Pipeline has been in the works for years.