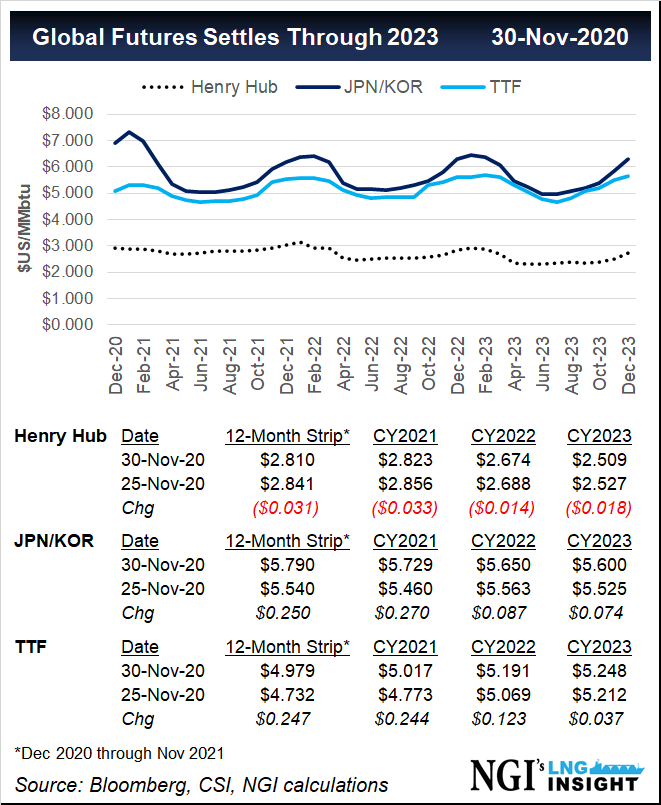 Henry Hub for January delivery continued to climb Monday on colder temperatures forecast for parts of the southern and eastern United States. U.S. natural gas futures rallied for three consecutive days last week, which was shortened by the Thanksgiving holiday.

Natural gas prices in the UK and Northwest Europe are also getting a lift from wintry weather, closing higher on Monday and sustaining last week’s momentum.

“Both day-ahead and curve contracts on the European gas markets climbed in Friday’s trading, and the change in weather remains the most important topic,” said trading firm Energi Danmark on Monday. “Temperatures have dropped below average in most of western and northern Europe, and the market expects them to remain there for the foreseeable future.”

UK imports are forecast to reach their highest level since April this month, with 18 LNG cargoes scheduled to arrive, according to Bloomberg ship-tracking data. Meanwhile, power demand across Europe has slowly recovered since June with Covid-19 lockdown restrictions easing, as well as businesses and schools reopening, according to data intelligence firm Kpler. Compared to 2019, European LNG imports are up by 5.6 million tons (Mt) this year to 75.6 Mt, Kpler said.

U.S. LNG exports to Europe have nearly doubled so far this year, thanks to a strong first quarter and are expected to return to pre-Coronavirus levels by December, Kpler said in a research note on Monday. NGI data shows that 200 of the 461 cargoes that have left the United States this year have been imported in Europe.

In North Asia, strong purchasing amid colder weather has pushed spot prices to near $8.00/MMBtu.

The shipping market has remained tight as a result of strong demand in both the Atlantic and Pacific basins.

“The regional imbalance continues with very few vessels in the Atlantic, and Panama Canal delays and longer voyages delivering into the colder winter in the East exacerbating the issue,” shipbroker Fearnleys AS said last week of vessel availability. “There were reports of cancellations of January cargoes loading out of the U.S. Gulf, due in part to a lack of available shipping.”

The oil markets aren’t as strong heading into the week as uncertainty surrounds meetings among the Organization of the Petroleum Exporting Countries and its allies this week over whether to extend crude production cuts. Brent for January delivery finished at $47.59/bbl Monday, down 59 cents from its previous close.

In personnel news, Tellurian Inc. announced the departure of CEO Meg Gentle, a former Cheniere Energy Inc. executive who joined Tellurian in 2016. Former Sempra LNG CEO Octávio Simões, who joined Tellurian as an adviser to Gentle last year after his retirement, was named as her replacement.

Gentle joined Tellurian after co-founder Charif Souki was ousted from Cheniere, which he also co-founded. Souki started Tellurian to develop the proposed 27.6 million metric tons/year Driftwood LNG export facility in Louisiana. Tellurian has had difficulties securing commercial arrangements with buyers to underpin the facility and has been forced to cut jobs, project costs and reshuffle management as a result.

Overseas, the Wall Street Journal reported last week that UK-based Centrica plc wants to sell its portfolio of LNG supply contracts and other assets as it looks to simplify its business. The energy supplier has a 20-year agreement in place to purchase LNG from Cheniere’s Sabine Pass export facility in Louisiana, among other terminals, and trades LNG cargoes across the world.

After reviewing its contract with Cheniere earlier this year, the company said it has little “intrinsic value” as the supply deal depends on the spread between the Gulf Coast and key markets in Europe and Asia, which have narrowed markedly in recent years.News of a possible sale of the company’s LNG business comes after Centrica said in July that it would sell its North American natural gas retail business to NRG Energy Inc. for $3.6 billion.