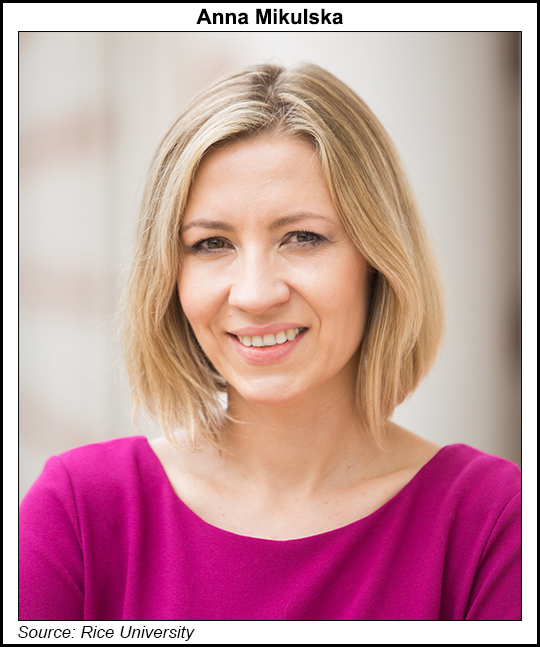 Anna Mikulska is a nonresident fellow in energy studies at Rice University’s Baker Institute for Public Policy and a senior fellow at the University of Pennsylvania’s Kleinman Center for Energy Policy. Her research focuses on the geopolitics of natural gas within the European Union, former Soviet Bloc and Russia. Her current interests include the potential use of natural gas as a geoeconomic tool and investigating ways to leverage U.S. LNG exports to bolster European energy security. She received a law degree from Adam Mickiewicz University, a master’s degree in international relations from the University of Windsor in Canada, and a Ph.D. in political science from the University of Houston.

NGI: Despite the Covid-19 pandemic and its impact on energy consumption worldwide, why has LNG demand remained relatively stable?

Mikulska: We all need to understand that LNG is very different than oil. First of all, it is not used for transportation the way oil is and that sort of demand has been hurt very much by the virus. LNG is used to produce electricity and heat houses. Because of this, demand won’t be hit as hard as oil. When we stay home, we still need electricity, heating and cooling. That’s beneficial for natural gas.

NGI: LNG demand is still expected to grow this year and beyond. What parts of the world will drive that growth?

Mikulska: While Europe has continued to play a key role during the pandemic because of its location and storage capacity, what generally will drive LNG demand is Asia. Asia, specifically China, has been restarting its economy. And LNG demand there will likely grow. In fact, it has been growing during the pandemic; it just hasn’t grown at the rate it would have without Covid-19.

Record volumes of U.S. LNG have gone to Europe this year, but that isn’t likely to be the case in the coming months, as we’re already seeing cargo cancellations for June. We will hopefully see demand recover in the Asian economies like China, Japan and South Korea, and as they recover, they will need natural gas.

NGI: Why is LNG demand so strong in Asia?

Mikulska: They’re gas-importing countries. Demand overwhelms supply, and there’s a lot of appetite for bringing in natural gas. But one thing that has stifled the use of natural gas in some countries throughout Asia is the lack of infrastructure. In India, a leading importer, there are problems distributing that gas because the pipeline network is not there. There are plans in the works there to expand distribution with trucks and pipelines, and that’s likely to continue in a lot of countries in the region.

Natural gas is also very cheap, and a lot of Asian countries have depended heavily on coal. Plans for coal-fired power plants will be costly. With natural gas being as cheap as it is right now, those plans might change because gas is more competitive with coal. Some of this demand is going to be impacted by the pandemic in the short term. It will recover, but that will depend on how quickly the economies pick up in Asia.

NGI: Given the pandemic’s impact on energy demand, is it likely to change how the LNG market is evolving and affect spot trading, long-term contracts or new export projects?

Mikulska: There is this question right now of what’s going to happen in the short term versus what’s going to happen in the mid- to long term? In the short term, you will definitely see — we have already seen — the postponement of projects because of the economic slowdown. But you might also see projects that are canceled, like the ones that might not be able to get enough interest or long-term contracts. But then again, there are so many of these projects that it was obvious not all of them would have ended up being built in the first place.

Over the longer term, things will depend more on demand. But what’s going to happen with the dynamic of how gas is priced? Right now, we have this really complicated natural gas pricing that depends on spot pricing, index pricing, oil-indexed pricing. And the sellers and buyers each have their own terms, so we really don’t know the specifics. It seems that oil-priced LNG might lose favor compared to spot or gas hub pricing.

But given what’s happening with the pandemic, what will the buyer or seller prefer? Will we see the continuation of moving away from oil-indexing to more of a market approach with hub pricing and LNG being a more global commodity? Or will the sellers and buyers favor the oil-indexing because it’s more of a safety valve? It’s a question I don’t have an answer for, but there is a probability of the market globalization retreating. There could also be an impact on how contracts are drawn for the long term or the medium term.

NGI: You noted that Europe has been a top destination for LNG. Do you expect that to continue being the case in the years to come?

Mikulska: The expectation is that Europe will continue to be a big market for U.S. LNG in particular, and much of that trade will happen on spot terms. But the European LNG market will not be developing at the same pace as other markets. The bulk of growth in demand will come from Asia.

I do think U.S. LNG is now a very important part of the European natural gas mix. In Western Europe, LNG has diversified supply. As you do that, countries aren’t exposed to higher prices or dominant suppliers. Western Europe has a very interconnected pipeline network and LNG terminals that have actually been under-used, so countries there can make sure they’re balancing their portfolio and take advantage of good spot prices when needed to substitute other supplies that are more expensive.

In central, eastern and southeastern Europe, the situation is different. Russia has been a dominant supplier there for years, and it was once the only supplier for many countries in the region. Russia has used that fact to impose a higher price in those countries and influence them geopolitically. This has prompted countries to bring in other suppliers.

U.S. LNG has been seen in that nature as part of energy security policy, so it’s not only the prices, but the role U.S. LNG and other LNG can play in making sure that Russia cannot use the dominant supplier strategy. For example, Poland has contracted enough gas from outside sources, including U.S. LNG, to completely eliminate the need for Russian gas. Such efforts are also leading to steep discounts for Russian gas in other places like Bulgaria and Lithuania.

Because of this, there is still going to be — especially in central and eastern Europe — an appetite for LNG. In general, the contracts are there.

NGI: To be clear, is Russia the United States’ primary concern in Europe when it comes to geopolitics and the role natural gas exports have to play?

Mikulska: Yes, we’ve seen the kind of relationship that the United States has with Russia in that part of the world, and we’ve seen American energy diplomacy there, with all the talk about “freedom gas.” The current administration has been quite resolved to supply, or at least confirm that it will support more U.S. supplies going into central and eastern Europe. There is an effort by the U.S. government, even though it doesn’t own that LNG, to make it easier for Europe to import more of it.

NGI: Is there enough anti-fossil fuel sentiment or public policy being advanced in Europe to eventually limit the use of LNG in a significant way across the continent?

Mikulska: There is always that kind of concern about things like the European Green Deal, and we hear voices saying that we should not be developing natural gas infrastructure because it will perpetuate the use of fossil fuels.

This occurs more in western Europe than it does in central and eastern Europe. Countries like Poland actually see natural gas as something they can use to improve their environmental record. And gas can actually be used to reduce emissions.

But in countries like France, nuclear power plants are aging, and if those are replaced with natural gas, their emissions will be higher. There is that concern too.

It all depends on how you look at it, and we’re going to continue to see that clash between those that view LNG and natural gas as a bridge with environmental benefits and those that want a carbon-neutral economy. To an extent, we’ll have to wait and see. I wonder how the pandemic will affect all this. Does it mean countries will push ahead with greener technologies, or does it mean that they’ll slow down their climate efforts because they have so much to deal with?

These are wealthy societies, but not everybody has the money to pay for more expensive energy, and there might be less disposable income to help support this transition after the pandemic. These are the things governments will have to consider going forward.