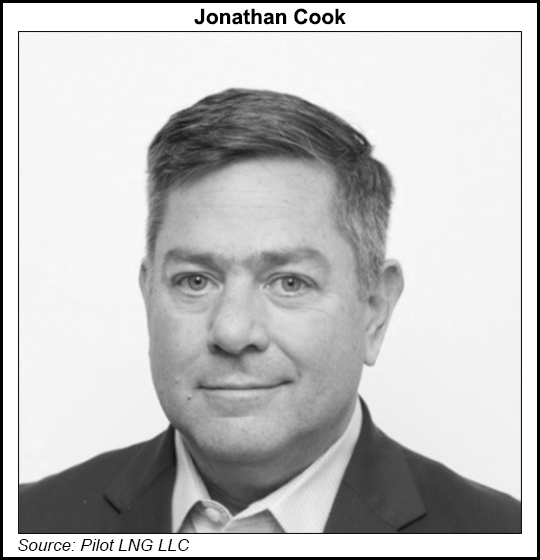 Pilot LNG LLC CEO Jonathan Cook co-founded Excelerate Energy LP in 2003, where he served as COO. He managed the development of the portfolio of floating storage and regasification unit (FSRU) projects and helped expand the c fleet. He also served as CEO of LNG shipper Flex LNG Ltd. Pilot, co-founded by Cook in mid-2019, is developing the Gulf Coast’s first dedicated bunkering terminal to refuel ships with LNG.

NGI: Was Pilot founded solely with the goal of developing the bunker port along the Gulf Coast?

Cook: We founded Pilot to be a project development company in the LNG space to create new markets for LNG internationally, which means things like FSRU or bunkering, because LNG as a marine fuel is a new and emerging market. When we formed Pilot, we were looking at the LNG space and the fact that, presently, there’s excess supply in the market. We have a couple other projects we’re working on that are FSRU-related import projects.

We thought that having an LNG bunkering facility in the Houston/Galveston area made a lot of sense. That doesn’t necessarily alleviate the problem of excess supply because we’re not going to be taking any; we’re going to be making our own.

As we looked at it, we thought we could produce the LNG at a cost that’s competitive with what the large export terminals are doing. One of the first things we asked ourselves is why wouldn’t we just get the LNG from one of the export terminals, bring it to the market and the vessels? But if we can produce LNG at similar costs, we can eliminate the additional transportation to bring the LNG from the remote locations to the market…The other reason we didn’t do that is because most of the export projects are not geared for loading LNG bunker vessels. They’re focused on their long-term, large-scale export customers.

NGI: There’s been a lot of growth in this space around the world, but why have no dedicated bunkering facilities been constructed along the Gulf Coast?

Cook: I think it’s the early stage of this market. Up until the last year or so, except for cruise ships, there hasn’t been much additional interest in ordering LNG-capable vessels. But we’ve seen more lately, where Royal Dutch Shell plc is chartering LNG-capable tankers like very large crude carriers. The container ships and car carriers are also starting to use LNG too.

If we compare our project with the projects on the East Coast, like in Jacksonville, FL, those are land-based terminals. Given our background in floating solutions, we saw an opportunity others may have overlooked. From a construction and cost perspective, smaller land-based terminals would be more expensive. Along the Gulf, from a technical perspective, the land is soft and it would require a lot of pilings to support the equipment for a land-based facility. So, whether it’s a cost issue or just the market development issue, those are the only reasons I can think of as to why someone hasn’t done this already.

NGI: Can you describe the project and provide an overview of the vessel? How will it receive natural gas and any other equipment that might be required?

Cook: The location we’ve selected is owned by the Port of Galveston, and it’s a relatively remote location on Pelican Island. Most of Pelican Island is a dredge disposal site, and as such, it’s not a very attractive site for other types of port activities. An advantage for us is that it’s located in the middle of the largest port complex in the United States — being at the center of the ports of Houston, Texas City and Galveston.

The configuration of the terminal will have a small footprint when it comes to the shore side infrastructure. There will be a control station and a metering station on land, where the gas supply comes in. There will also be a jetty and trestle where the FLNG will be permanently moored. That unit will receive the feed gas and liquefy it. The unit will have 18,000 cubic meters of storage and the capacity to produce 500,000 tons of LNG per year.

LNG bunker barges will load from the terminal and then distribute the LNG to the ships requiring fuel. The ships that are going to be burning the LNG as fuel will not berth alongside our terminal.

NGI: Would Pilot own the bunker barges?

Cook: That’s to be determined, and it will depend on the interest from companies that may want to do that kind of distribution, whether it’s an existing barge operator or if there’s a preference from our customers as to how they want to see that configured. We could establish an affiliate of the project to run those vessels, but that has not yet been finalized.

NGI: Will Pilot construct a pipeline to feed the FLNG unit?

Cook: Energy Transfer LP’s Houston Pipe Line Co. LP already has a pipeline that comes onto Pelican Island, and it could be expanded to supply the gas to the terminal. We will contract for the pipeline capacity. This gas will also be coming from intrastate pipeline systems and not interstate systems, and the fact that it is also a bunker project and not an export project, means that we do not have to go through a full permitting process with the Federal Energy Regulatory Commission.

NGI: Can you explain how a ship would get fuel from your facility? For example, do these vessels have to be customers with contracted fueling capacity?

Cook: We’ll have a combination of customers with term contracts to be supplied a certain amount of LNG over a dedicated period of time. And then the bunker vessels will be there to supply them. There will also be some volume that is done more on a spot basis, and we’ll be working with some of the large international bunker suppliers who have the contracts with the various ship owners that need to procure fuel.

NGI: Do you need long-term contracted customers to reach a final investment decision (FID) on the facility?

Cook: Probably, but that may depend on what our investor appetite is at FID. We haven’t made any firm agreements with anyone on that post-FID funding. It will depend on the appetite of the investors, whether they prefer more long-term contracts or a merchant model, or we could have a contract with one of the majors, like Shell or Total SE. They’re both market makers in this space. If they wanted to come in and contract for a portion of our production, we’d be happy to do that.

NGI: How is LNG priced for bunkering?

Cook: It’s still early in the process for us, but we’re open to different structures. We could supply LNG on a free-on-board basis under some sort of tolling arrangement. If it’s ex-terminal, we could charge for cost of service and delivery, along with the commodity of Henry Hub or whatever the gas benchmark will be.

Most of the contracts we know of in Europe are based on the Dutch Title Transfer Facility price plus the cost for shipping, handling and delivery. Under the LNG bunkers that are provided in Europe, the LNG first needs to be imported, so there’s a shipping component to the supply source, then it’s discharged into a receiving terminal and loaded onto a bunker vessel. So, you have that cost of the terminal in Europe, where the cargo is basically being double handled. For us, by producing LNG at the market, we avoid those additional costs.

NGI: Would vessels headed from Europe toward the Gulf Coast not need to fill up for a round-trip if your facility is constructed?

Cook: Depending on pricing, they wouldn’t have to. By creating LNG bunker supply here in the U.S. Gulf Coast, that just provides more flexibility to the operators of the vessels that are using LNG as a marine fuel.

NGI: Is Pilot working on any other projects beyond the bunkering facility?

Cook: We have some international floating storage regasification projects in the works, but those are in the early stages of development and there’s not a lot of details I can share. We’ve got our eye on other markets in North America for bunkering operations too, but again, it’s too early to talk about.

*Excerpts in this segment have been edited for brevity and clarity.