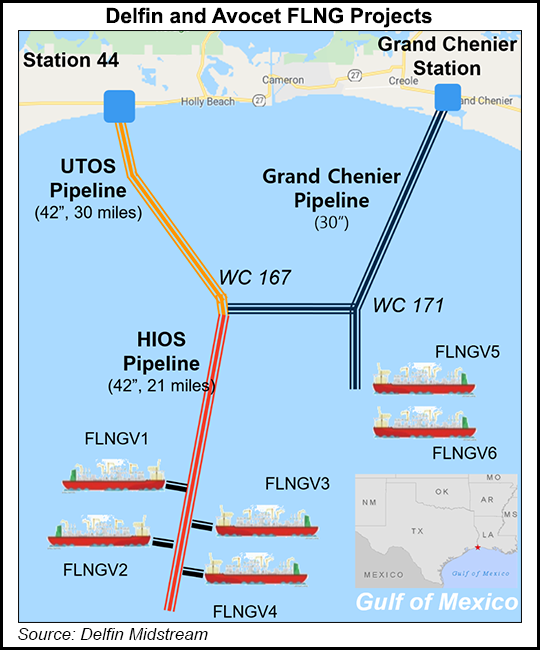 CEO Dudley Poston and COO Wouter Pastoor have managed Delfin Midstream since 2018. The company is developing a first-of-its-kind floating liquefied natural gas (FLNG) export project off the coast of Cameron Parish, LA. Similar to onshore facilities, FLNG vessels liquefy natural gas, store it on board and load carriers for export.

NGI: Can you provide a brief overview of the Delfin and Avocet FLNG projects?

Pastoor: The Delfin project is our anchor project. All the permitting work has been completed. The project consists of onshore facilities, an offshore pipeline that connects to those facilities to move gas to up to four FLNG vessels with a total export capacity of 13 million metric tons/ year (mmty).

The company also acquired additional pipelines nearby connecting to our other existing assets and that will allow us to develop the Avocet project, which is still in the planning stages. We haven’t started the permitting process for Avocet yet. Avocet would also have an onshore facility connected to the offshore pipeline to move gas to more FLNG vessels.

NGI: Is the Delfin project still on track to make a final investment decision (FID) on its first FLNG vessel this year?

Poston: We will be able to make FID by the end of this year. With Covid-19, that could slip into next year, but that has been our schedule.

NGI: What about the timeline for the other three Delfin FLNG vessels, do you have any idea when you might sanction those?

Poston: It will be dependent on the market. We could make FID on all of those very close together. We could also in theory build in different shipyards at the same time or build several of them in the same shipyard, but it depends on the speed at which commercial arrangements develop. We’re really focused on getting the first vessel online, and then we’ll focus on the second, third and fourth vessels.

NGI: Can you talk about your progress with some of the key factors that will get Delfin’s first FLNG vessel to FID, such as offtake agreements and financing?

Poston: Most of our capital expenditures will be spent in an Asian shipyard, so that gives us a lot of flexibility in terms of financing. We’re going to have very strong support from the export credit agencies in those countries where we’ll build the FLNG vessel, which will basically take all of the debt we need to get the vessel built. And securing shipyard capacity is not a problem at all.

As far as the commercial discussions go, there have been fewer Henry Hub-indexed contracts signed since this crisis in the LNG market that was caused by the pandemic and oversupply. But we only need one or two contracts to get to FID instead of the six to eight buyers that larger projects typically need.

We have ongoing discussions with potential buyers, but have not announced a supply agreement yet.

NGI: What will Delfin’s commercial structure look like, and will lower project costs be reflected in what offtakers pay for LNG?

Poston: First wave contracts in the U.S. were somewhere between the range of 115% of Henry Hub plus $2.25-3.50/MMBtu. Clearly that era of LNG pricing is over. You will never see those prices again. In our view, for a standard 20-year deal, we think it’ll be 115% of Henry Hub and never get above $2.25 again. We’re now moving into a low-cost era that will require more flexibility. Our vessels can be contracted more easily and could even be moved to other parts of the world. Early FLNG vessels have been moved, so you’ve already seen that, which gives us flexibility to do shorter-term contracts.

NGI: How has the pandemic impacted discussions with potential offtakers and your daily business operations?

Poston: Clearly, it has slowed things down because we can’t travel as much, but at the end of the day, the biggest factor of Covid-19 has been shutting down all LNG FIDs in the rest of the world. There were so many projects that were planning to make FID in 2020 that are now going to be delayed. That’s caused the people that really do need the LNG — and there really are those people out there — to become even more aggressive. We’re not seeing a lack of interest, we’re probably seeing more interest because people are actually looking for projects that can make FID in the 2021-2022 time table.

NGI: Are you targeting customers in any particular part of the world?

NGI: What was the impetus for this project and when did you begin work on it?

Pastoor: Both Dudley and myself have been working with FLNG for many years. We’ve always been advocates of floating midstream solutions like regasification. Before we joined Delfin, we were always advocating a two-path strategy at Golar. We pushed for a strategy in Africa, where there’s a lot of stranded gas assets that you can monetize with FLNG, and we said we need to have a North American angle too.

The revolution that we have seen in North America with shale gas is fantastic, and combining that with the advantages of FLNG is really something we wanted to focus on. At Golar, the focus was more on stranded assets in Africa, pursuing cheap gas, but projects there have a higher risk profile.

FLNG in North America, particularly in the United States, is a different ballgame when it comes to risk. For example, the financing prospects are much more favorable. We were always supportive of the Delfin project and began to collaborate with its early management when we were at Golar.

At some point in time, the Delfin shareholders decided they needed to take better control of developing the project, bring FLNG technology in-house and not have to rely on third parties, which is when they took a controlling stake and brought Dudley and myself in. We also brought in a few other people, including those from Golar. We have been involved since 2014 from Golar’s side, but since 2018, we have managed the project.

NGI: Is Delfin mostly focused on the opportunities that LNG presents in North America?

Pastoor: Yes, but I think it’s two-fold. If you look at the global LNG market, it has great opportunity in the sense that there is a lot of demand that hasn’t been unlocked yet. The size of the LNG market is still small compared to other commodities like coal or oil. To transition to LNG in those sorts of markets will continue to present big opportunities.

The LNG industry has maybe been focused a bit too much on the traditional model and building large plants and financing them on the backs of long-term offtake contracts. The market is there, but the market wants flexible, low-cost LNG, like we’re used to with other types of fuels. To do more of that, we need to lower the cost of our production assets, reduce the risk profile and go smaller in size. Our project is very different from those on land in the sense that we are not in pursuit of economies of scale by trying to reach 26 mmty, which is a big mountain to scale.

NGI: How is your project different than larger facilities on land, what advantages does it have?

Pastoor: The labor costs are lower, a shipyard is already there, and we also don’t need to invest in a site. That’s one of the key advantages Delfin has. We’re not building a major plant somewhere along the coast in Louisiana and then building pipelines to that plant, we’re already using existing pipelines that once served offshore production. We own those, and that’s one of the cost-drivers for us to be lower than the other LNG projects on the Gulf Coast. In some ways, the Delfin project is a brownfield project because we’re repurposing existing facilities.

Given the lower costs, it helps that we can do 115% of Henry Hub plus $2.00 as a starting offer for buyers, which is a substantial discount to what others are offering. But more importantly from the buyers standpoint, is the fact that we can take FID by vessel in increments of 2.5-3 mmty each, then tailor both the commercial and financial structure to an offtaker and even another. If you’re buying your LNG from a 15 mmty project, you can buy your 1.5 mmty of supply, but then you have to wait until the developer fills up the bucket with so many other offtake deals before FID.

Poston: I would add that a lot of what we’re seeing in FLNG now is very similar to what happened about 10 years ago with floating storage regasification units (FSRU), which were used to really open up the new market. More than 20 countries have access to LNG now using FSRUs.

One of the reasons the United States has been so successful is because the contracts provide so much more flexibility to the LNG market than a traditional LNG contract. There is no such thing as destination-restricted LNG, buyers can take it anywhere they want in the world. If you want to buy gas reserves, you can. If you want to go off Henry Hub indexation, you can do that as well. There is so much more optionality and flexibility.

NGI: If Delfin and Avocet ultimately move forward, what’s next for the company?

Pastoor: We’re entrepreneurial, and understand the full value chain, and expanding within that value chain is certainly an opportunity. For example, we could pursue collaboration downstream in shipping, LNG-to-power, FSRU, small-scale LNG. The bunkering of LNG is certainly something that would be easy for us to entertain. It would not be a problem for Delfin to have a bunkering vessel in the Gulf of Mexico to fuel ships. It would be easier for us to do that than facilities on land.

*Excerpts in this segment have been edited for brevity and clarity.