Hawaii leaders have set a goal to use 100% renewables by 2045, but liquefied natural gas (LNG) may be a viable and cost-saving supplement to the use of synthetic natural gas (SNG) by Hawaii Gas as a primary fuel in the interim, according to the results of an 18-month bidding process by the state’s only regulated gas utility. 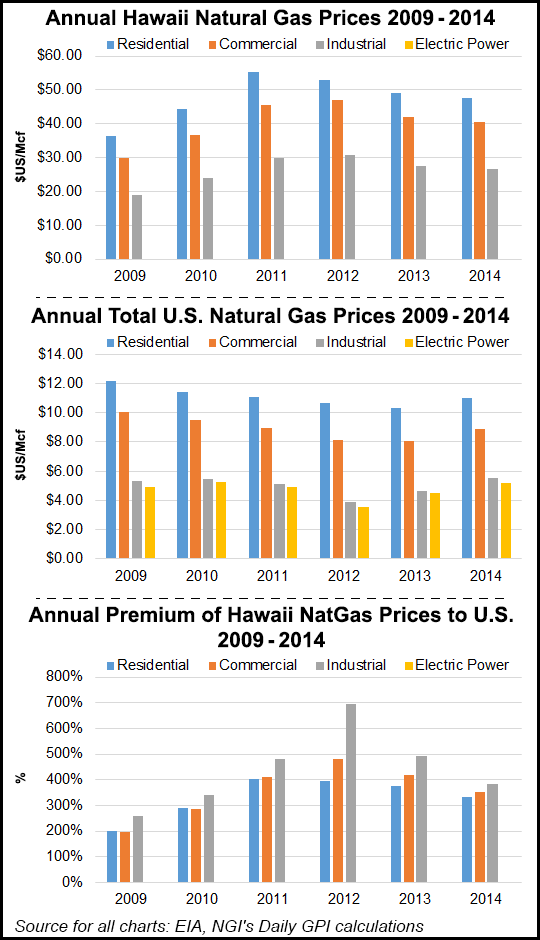 Natural gas may be a lower-cost substitute for the company’s SNG as well as a cheaper and cleaner alternative to the oil-based fuels used by electricity producers and ground/marine transportation operators, said a Hawaii Gas spokesperson said Tuesday when the report was released. “The Facts About LNG for Hawaii” follows five years of “discovery work” by the Macquarie Infrastructure Co. utility.

The only way to bring large quantities of LNG to the islands is for a third party to own and operate a floating storage and regasification unit (FSRU), Hawaii Gas said.

The report confirms the utility’s estimated $200 million project, which would provide an offshore mooring system and buoy, an FSRU, a subsea pipeline and five to 10 miles of onshore pipeline extensions. All of the costs for which could be fully recovered in 15 years.

“After that time, the use of LNG as a fuel source would cease and the FSRU could be redeployed,” according to the report.

Approvals would be required by the Federal Energy Regulatory Commission and the Hawaii Public Utilities Commission (PUC), allowing for community input, the spokesperson said.

“We support the state’s goal of 100% renewable by 2045 and believe there are multiple pathways to achieve this,” said Hawaii Gas CEO Alicia Moy said, referring to Gov. David Ige’s shift away from LNG to all renewables last year (see Daily GPI, Aug. 28, 2015).

But Moy said the gas utility now has confirmed its earlier findings about price and environmental benefits for natural gas and she intends to share the information as part of an “ongoing dialogue and analysis of how the state can achieve its goals in a cost-effective way for consumers.”

Among the findings in the report was an estimate that Hawaii Gas may be able to reduce its SNG utility customers’ bills by more than 25% through the proposed 15-year use of LNG.

For power customers, “LNG can provide an immediate cost-effective interim solution until battery and other energy storage systems can be developed and widely adopted,” the spokesperson said.

Using the cost of fuel consumed on Oahu last year to produce electricity, LNG could have saved electric utility customers $132 million in fuel costs, according to Hawaii Gas estimates. Natural gas could save power utility consumers $1.3 billion in fuel costs, or 30%, between 2019 and 2034, the proposed LNG delivery period.

During the same period, natural gas could reduce carbon dioxide greenhouse gas (GHG) emissions by 30%, the report noted. The use of gas-fired power generation also could accelerate the use of intermittent renewable sources, such as solar and wind, to further reduce GHG emissions.

“Using natural gas in Hawaii does not alter the state’s plan and does not impede the growth of renewable energy,” the report concluded.

“LNG provides substantial cost savings to our utility customers,” said Hawaii Gas Senior Vice President Joseph Boivin. “It is also extremely cost competitive, with the low sulfur fuel oil and diesel used to produce electricity, and even more so when compared to the blended fuels that will be needled to meet new environmental compliance requirements in 2016.”

Earlier this month the Honolulu-based utility released a request for proposals seeking supplies of renewable natural gas in the form of raw biogas and/or biomethane as part of its previously announced fuel diversification strategy, which includes containerized shipments of LNG (see Daily GPI, Jan. 13).

Five years ago Hawaii Gas began a phased program to make greater use of natural gas (see Daily GPI, Aug. 14, 2012). Hawaii has no naturally occurring fossil fuel resources, relying on imported petroleum to meet all of its energy needs. In 2011, the state reportedly imported 42 million bbl of crude oil and 4 million bbl of finished petroleum products.