International liquefied natural gas (LNG) buyers could keep up the strong pace of new long-term contracts through the rest of the year as short-term volumes continue to grow more expensive, according to market analysts. 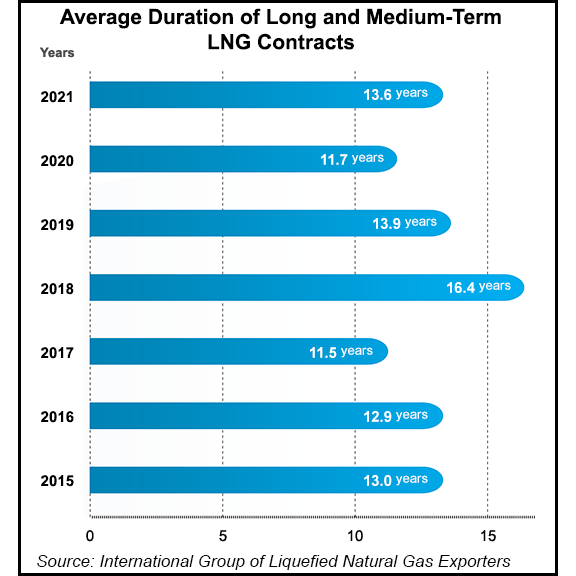 Since the beginning of the year, buyers have secured over 22 million metric tons/year (mmty) of LNG by signing new deals. Poten & Partners’ Jason Feer, global head of business intelligence, said most of those contracts have been for long-term offtake from U.S. projects at prices linked to Henry Hub.

Poten has also been tracking a rise in prices under new long-term contracts. Still, Feer said terms have remained competitive enough to create a price advantage that has enticed buyers to enter longer-term deals.

“I think a lot of competition among LNG projects in the U.S. and globally is going to keep a lid on higher prices, but – obviously – short term volumes are very expensive,” Feer said.

While Europe’s renewed demand for LNG has kept global natural gas prices elevated, most of the new long-term contracts have been signed by Asian buyers eager to shield themselves from volatility in the spot market. China has been especially dominant at the negotiating table.

Wood Mackenzie’s Daniel Toleman, principal analyst, said the firm hasn’t been able to substantiate some reports about 16% slopes on midterm contracts linked to crude oil benchmarks, but prices are generally on an upward climb for term volumes.

“These deals have limited flexibility, seasonality and are fixed to a market so the slope of a ‘normal’ contract is higher, between 12.5% and 14.0%,” he added. A slope is used in crude-linked contracts to determine the price of LNG set at a percentage of an oil benchmark.

Henry Hub-linked contracts are expected to remain competitive in contrast, but prices could rise marginally. Tomen said U.S. companies could “attract premiums” for “more advanced projects” that can deliver LNG in 2025-2026, thanks to limited new capacity in the near future. Companies could also be expected to raise fees further due to “rising raw material, labor” and construction costs inflating the price tag of “delivering projects on the U.S. Gulf Coast.”

Some of the contracts announced this year could reflect older terms that Asian firms have been negotiating for a while before finally being pushed to pull the trigger. Feer said terms on newer deals have generally been pushing beyond $2/MMBtu.

“I think Asian buyers in particular have been negotiating for years with U.S. projects and saw the writing on the wall,” Feer said.

So far, at least three major deals have been announced with European buyers locking in 7 mmty of long-term volumes from proposed U.S. projects. France’s Engie SA became the first European company to announce a deal for U.S. LNG after the invasion of Ukraine with a 15-year contract with NextDecade Corp. It was recently followed by Polish Oil and Gas Co. and German utility RWE AG, which both announced preliminary agreements with Sempra Infrastructure.

Feer said some of Europe’s delay could come from a learning curve to entering the market as a large player after years of inactive contracting. There are also still major questions about how long-term contracts could impact Europe’s climate goals.

Feer said Poten expects “Europe to sign some long-term contracts,” but “how much volume is really unclear.” Limited amounts of additional capacity from U.S. and Qatari projects are estimated to come online by 2026, raising competition for potential volumes.

Without sufficient long-term contracts, Feer said most of Europe could end up relying on companies like ExxonMobil and Shell plc with large aggregated portfolios of LNG to help meet their energy demands.

“That’s a risky strategy,” Feer said. “I think Europe would have to pay up for that, but it is a way to avoid long-term contracts.”

So far, many European countries have decided to lease floating storage and regasification units (FSRU), which presents its own concerns for U.S. projects. Feer said the fact that Europe is deploying possibly temporary FSRUs raises the question about how long heightened demand will last. He said U.S. companies could be expected to keep their eyes on established Asian customers and emerging markets, which also means they can’t risk raising contract terms too high.

“I think sellers don’t want to leave money on the table, but they don’t want to drive new, recent entrants to the LNG market away,” Feer said.