Nikos Tsafos, a senior fellow at the Center for Strategic & International Studies’ Energy Security and Climate Change Program, believes the global natural gas market can count on turbulence in the years ahead, with more volatility likely and an increasingly murkier role to play in the energy transition. 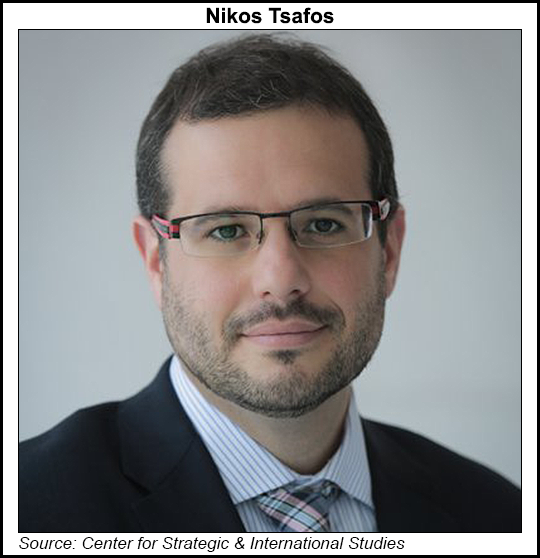 NGI: It was a rough summer for the LNG market. Fundamentals have improved, but given the supply and demand outlook, there’s a possibility for more volatility next summer. Do you think that’s the case? Are we likely to see prices crash again and more U.S. cargo cancellations in 2021?

Tsafos: It’s hard to see how we’re out of the woods; I don’t think we are. Even before Covid-19, the market was oversupplied. We were talking about summer cancellations before Covid was a thing, but Covid made things worse. I don’t see a lot of upside for demand. There’s a lot of gas in the market, and it’s trying to find a place to go.

There’s also a lot of gas in storage in both Europe and the United States. How quickly that is depleted, and where we end up in March or April, will set the tone for summer. If you don’t take enough gas out of storage and you’re headed into the injection season with a lot of gas in storage, that’s going to be very bearish.

To be fair, we saw a lot of things that we didn’t expect this summer, like the convergence of the Title Transfer Facility (TTF), Henry Hub and the Japan Korea Marker (JKM) — that’s not something people were forecasting. So, I don’t know if we’ve had a full assessment of how these things interact with one another quite yet. But broadly speaking, I still think it’s going to be a tough couple of years for the industry.

NGI: What does that mean for the competitiveness of U.S. LNG if the market is persistently oversupplied and buyers are having to cancel cargoes on a regular basis?

Tsafos:  In one way, I think of cargo cancellations as a feature and not a bug. Everyone thought that this was an attractive element of U.S. LNG, that you could have that flexibility. In some ways, what you see now is U.S. LNG doing something that other projects in the world couldn’t really do.

From the beginning, U.S. natural gas has been marketed as an arbitrage gain. It makes sense when prices are cheap in the United States and expensive overseas. I don’t think that the kind of disparities we saw over the last decade are coming back, with double-digit JKM prices for example. The question is not really volatility or Covid, but if you end up with a gas price of about $2.00 or $3.00 in the United States and a price in Asia of $4.00-6.00, which is quite plausible, where is the arbitrage? There’s fundamentally a $3.00 to $5.00 delta that you need to make new U.S. export projects work in both Europe and Asia, with the low end of that range for Europe and the high end for Asia. On a marginal cost basis for existing projects, you can still support exports at a lower band, maybe $1.00 to $3.00. But I don’t know that we’re going to get back to that kind of delta and that might make new U.S. export projects less attractive.

NGI: You noted how global gas prices converged this summer and were trading around the same price. Where did Henry Hub fit into all of that, and how did the benchmark influence the international gas market?

Tsafos: We’ve seen TTF and JKM interact a lot more. You can see when one goes down the other goes down and vice versa. It’s not a perfect correlation, but there’s interaction. Henry Hub doesn’t really do much. It hasn’t gone up and down in a way that’s influenced international prices, although when you shrank the arbitrage people canceled cargoes. My point is that we’ve developed a little bit of an appreciation of how JKM and TTF are interacting, but we still don’t know how Henry Hub affects the world. Things happened very quickly this year over a few months and because of Covid it was hard to judge. We saw the Russians cut back production, we saw U.S. LNG cut back, we saw other major producers like Canada, Algeria and Norway all cut back, but the biggest cuts came from U.S. LNG and Russian pipeline gas.

One of the elements we saw this summer was that the market works, eventually prices come down and producers cut back, but it doesn’t work very fast. Prices stayed low for a long time. JKM was around $2.00 for like three months. We’re still learning how the adjustment processes work and how quickly supply cuts lead to price increases. We still don’t understand these processes well.

NGI: Part of your research is focused on the energy transition, which would seem to challenge the worldwide growth we’ve seen in natural gas consumption. What kind of role do you expect natural gas to play in the coming decades as more nations work to reshape their energy profiles and cut emissions?

Tsafos: I think there’s been a long-held assumption that the energy transition will be good for gas, and I think there’s a growing recognition that this might not be the case. If you go back five or 10 years, a lot of oil companies said natural gas was their climate strategy. I think you’re now seeing this overarching assumption being shaken. The International Energy Agency’s latest outlook showed a possible decline in the use of gas in its sustainable development scenario and possibly that you might not need a lot of LNG if you are in a transition.

You also have to think about gas on a regional and sectoral basis. You can’t lump together gas for power in the United States, gas for heating in Europe, gas for chemicals in the Middle East or whatever else in Asia. Natural gas does different things in different markets at different costs.  My view is that gas has done very well in areas where it is very competitive, or where there’s a clear policy rationale for using natural gas, for example, in places like China to clean up the skies, or in the European Union with the carbon price and the United States where it’s dirt cheap.

NGI: In areas where natural gas isn’t doing well and it might aid in the energy transition, have major portfolio players or others driving supply done enough to better develop markets for the fuel?

Tsafos: Yes and no. In theory, suppliers should try to do more to develop gas markets. In practice, though, that’s just not really happening. I think suppliers have let the demand take care of itself. If you look at who’s doing regasification terminals in the world, very rarely is it driven by a supplier. Usually, it’s the importing country, a utility or someone else doing these projects. Gas-fired power projects are even rarer for a supplier to pursue. You’ve seen some players take a lead in LNG for bunkering, that’s been an area where they’ve been more willing to spend money. But you haven’t really seen a lot of downstream investment, with some exceptions like Total SE, which has started getting more active. But that’s been the exception rather than the rule.

The other challenge with development is one of competitiveness. You still have a lot of LNG tied to the price of oil. If you had cheaper gas, then it wouldn’t be as difficult to develop the market.

NGI: Do you expect things like sustainably produced natural gas or carbon-neutral LNG to strengthen the fuel’s role in the energy transition or should the market view these sorts of things as trends?

Tsafos: Methane emissions have really hurt the image of natural gas. We’re at the point now where people are questioning whether gas was really helpful in reducing emissions compared to coal because the numbers might not be right on methane emissions. I think there’s an element to all of this where if the industry can’t get its house in order and demonstrate that it’s trying to do that, everything gets tougher for it.

No matter what, we’re in a world where more and more people are going to care about how energy is produced and whether the producer has managed to minimize the emissions during production, processing, liquefaction, transportation and other processes across the entire value chain.

Companies are doing carbon offsets on LNG deliveries, or talking about carbon capture at liquefaction plants, they’re talking about the ability to power LNG operations with hydrogen or renewables, so clearly there’s an effort to lower the carbon intensity of these products as much as possible because there’s a theory it will make gas more competitive in the future. It may just be another cost, and if it is, and you can still make money, that’s fine. Or the customer might elect to take the least carbon intensive gas even if it is more expensive. We haven’t quite seen how it will play out yet. But in some ways, it’s kind of like a survival mode, where companies need to do it to keep making their case for natural gas as a solution for the energy transition.

Nikos Tsafos has advised companies and governments in over 30 countries. His experience includes market analysis, strategy formulation, due diligence and support for commercial negotiations and project development. He led PFC Energy’s (now IHS Markit) global gas consulting practice. He also spent over three years as an adviser to the Alaska legislature focused largely on the Alaska LNG project. His research interests include natural gas, the geopolitics of energy, the future of mobility and the energy transition.