The liquefied natural gas (LNG) market had a banner year in 2019, with strong import growth and record production, but the trade faces tests in the year ahead as the coronavirus outbreak continues to impact nearly every facet, according to the trade group that represents companies active in importing worldwide. 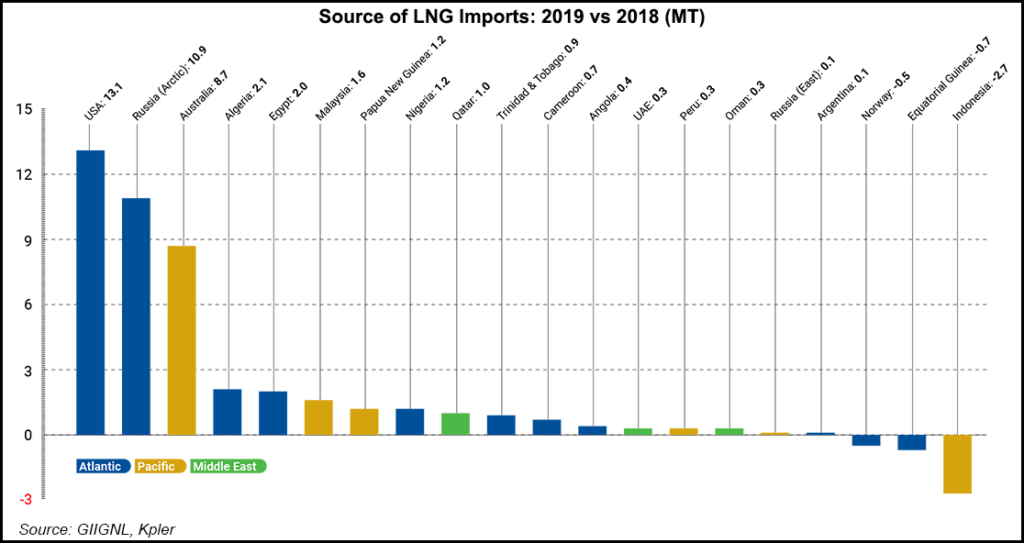 The International Group of Liquefied Natural Gas Importers (GIIGNL) said in its annual report that the global gas trade “grew at a vigorous” pace last year, as imports reached 354.7 million tons (MT), up 13% from 2018 when imports were 313.8 MT. Last year also “marked an all-time record increase” in annual production, driven by new liquefaction trains and ramp-ups in Australia, Russia and the United States. But the outlook has dimmed this year.

“In the near term, the disruptive impact of the Covid-19 outbreak on the economies of importing countries will exert downward pressure on LNG demand in an already oversupplied market,” said GIIGNL President Jean-Marie Dauger.

Last year marked the strongest LNG supply growth since 2010, thanks largely to volumes from the United States, which led at 13.1 MT. That was followed by Russia, which brought on 11 MT, and Australia, which had 8.7 MT.

On the demand side, Asia continued to be the leading importing region, accounting for 69% of all imports, but it was down from 76% in 2018.

Northeast Asian demand growth moderated from an economic slowdown, milder weather and competition from nuclear and coal-fired power generation, while most additional LNG volumes were absorbed by Europe, which played a balancing role thanks to abundant infrastructure and a well connected gas market.

GIIGNL also noted that LNG continued to commoditize last year. Both spot and short-term volumes increased by nearly 20% year/year, reaching 119 MT or 34% of all global trade compared with 32% in 2018.

Growth in spot trading was primarily supported by the increase of flexible volumes from the United States and from Australia. The rise of LNG volumes handled by traders and portfolio players, which have continued to optimize their portfolios, also further commoditized the market.

While 2019 also saw a record year for final investment decisions, which reached 71 MT of capacity sanctioned, some projects could be at risk of delay as the coronavirus outbreak cuts into demand and lower oil prices could make some projects unprofitable.

Ship brokerage Poten and Partners said during a webinar on Wednesday export projects across the world representing 227.5 million metric tons/year are likely to face delay from the pandemic.