Plans to convert an Alaska liquefied natural gas (LNG) export terminal, the oldest in the United States, to allow imports moved ahead this week after clearing another regulatory hurdle. 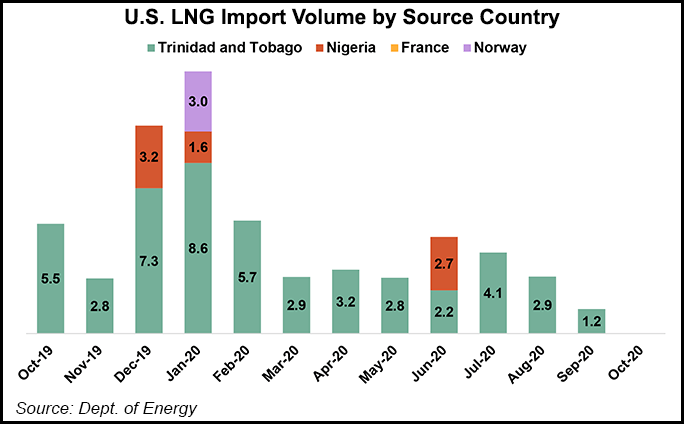 FERC in December approved Trans-Foreland Pipeline Co. LLC’s application to import natural gas at Kenai. The Federal Energy Regulatory Commission had requested a consultation from NMFS on whether those plans would impact Cook Inlet beluga whales or their critical habitat, and other species of gray whales, humpback whales, sei whales or sea lions.

“The proposed LNG facility upgrades will occur entirely on land, therefore the construction of the upgrades is not expected to impact water resources, fishes, marine mammals, and/or threatened and endangered species,” wrote NMFS in a letter to FERC earlier this week. The agency added that because the “project proposes no change in vessel operations compared with current conditions, no additional adverse effects from vessel operations are expected as a result of this action.”

Kenai began operating in 1969 and for more than 40 years was the only LNG export terminal in the United States. The terminal has a liquefaction capacity of 200 MMcf/d, but the plant hasn’t exported LNG since 2015. It’s been idled since Marathon Petroleum acquired it from ConocoPhillips in 2018.

Trans-Foreland wants to construct facilities, return two 35,000 cubic meter storage tanks and other equipment to service to import LNG. Liquefaction would remain out of service under current plans.

The new equipment would be installed to cool down the existing LNG storage tanks. The boil-off gas, or the LNG that evaporates while sitting in storage, would be delivered to Marathon Petroleum’s Kenai Refinery on the Cook Inlet, 60 miles southwest of Anchorage. The refinery processes mainly Alaska domestic crude to manufacture gasoline, distillates, heavy fuel oil, asphalt and propane.