Belgian midstreamer Fluxys said Monday that it has made a positive final investment decision to nearly double the regasification capacity at its Zeebrugge liquefied natural gas (LNG) import terminal after a successful open season. 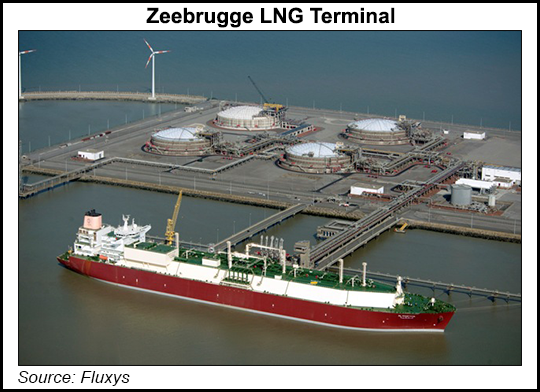 The company said the full 6 million metric tons/year (mmty) of additional regasification capacity at the facility in Belgium was fully subscribed during a binding open season. Fluxys said it would move ahead on construction of the infrastructure required to expand the terminal.

Europe remains a top destination for U.S. LNG exports, accounting for roughly 40% of all cargoes that left the country between January 2020 and January 2021, according to NGI calculations.

Capacity at the terminal is to be added in two phases. The first 2.5 mmty expansion is set for the next three to four years, while a similarly-sized expansion would be completed sometime after that.

Indian LNG imports have been increasing steadily in the last decade, hitting a record high early last year, according to data intelligence firm Kpler. India has typically been a consistent home for Qatari cargoes, but those sourced from the United States have increased in the last year, Kpler said recently.

India is aiming to curb emissions by increasing the share of natural gas used in its energy mix to 15% from current levels of 6.2%.