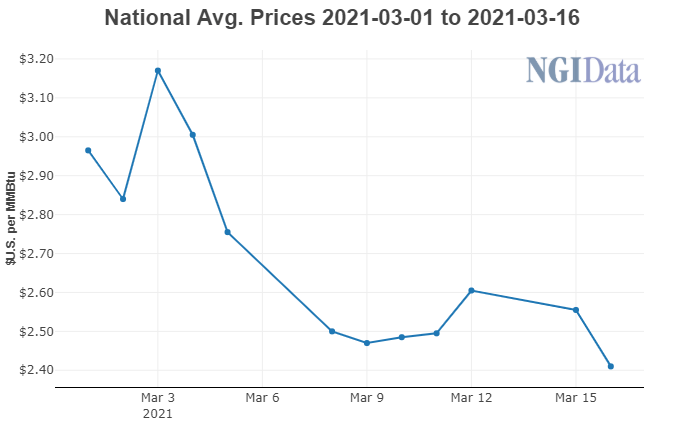 On Monday, the prompt month dropped 11.6 cents and fell to its lowest level since early January. Even with Tuesday’s gain, the April contract finished in the green only twice over the past 10 trading sessions.

LNG export volumes topped 11 Bcf for the fourth time in five days, hitting 11.58 Bcf on Tuesday, according to NGI estimates. Analysts said Asian demand for U.S. supplies of the super-chilled fuel continue to prove strong, supporting a recovery to near record levels after delivery interruptions caused by the Texas deep freeze in February.

However, the firm said weather forecasts for the final third of March continued to show warmer temperatures and weakening demand for natural gas to run furnaces – the principal reason futures have struggled to get into positive territory this month.

“The overnight data failed to trend any colder and remains quite bearish” from Sunday (March 21) through March 29, NatGasWeather said Tuesday. The data “maintained moderate demand early and late this week” but “exceptionally comfortable” temperatures “for the start of spring, with highs over most of the U.S. March 21-29 reaching the 50s to 80s.”

Colder weather systems could show up during the final days of March, “but even then, this would require considerably more weather data to come on board if it’s to be expected, which right now it isn’t. As such, weather patterns will maintain a bearish bias into the foreseeable future.”

While LNG is currently a bright spot, “for a sustained rally, it’ll likely take other components of the supply/demand balance to also show tightening” – either a drop in production or an unforeseen shift to stronger weather-driven demand, according to NatGasWeather.

Looking ahead to Thursday’s U.S. Energy Information Administration (EIA) storage report, the firm noted that early estimates pointed to a small withdrawal. The “past two EIA weekly storage reports have shown a much looser supply/demand balance than the natural gas markets were anticipating, and that’s led to forecasts of lighter draws,” the firm said.

EIA reported a withdrawal of 52 Bcf from natural gas inventories for the week ended March 5. The result fell short of expectations for a pull in the 70s Bcf. That followed a 98 Bcf withdrawal for the week ended Feb. 26, far shy of estimates that clustered around a draw in the 130s-140s Bcf.

For Thursday’s print, Energy Aspects posted a preliminary estimate for a 25 Bcf withdrawal for the week ending March 12.

“Mild weather will see the withdrawal moderate as the heating season sputters to an end,” the firm said. It modeled a 4.1 Bcf/d week/week drop-off in residential/commercial demand for the period on a 10% decline in gas-weighted heating degree days, while power burns were down an estimated 1.0 Bcf/d week/week.

On the supply side, Lower 48 production was down an estimated 0.3 Bcf/d week/week for the period, according to the firm.

A preliminary survey by Bloomberg found estimates ranging from draws of 14 Bcf to 27 Bcf and a median forecast for a 19 Bcf decrease in underground stocks.

Spot gas prices on Tuesday fell as temperatures were poised to climb in the Northeast. Highs hovered in the 30s in Boston, for example, but were expected to jump into the 50s on Wednesday and Thursday.

After a blast of winter dropped several inches of snow across swaths of the Rocky Mountain region and the northern Plains last weekend, another weather system brought rain and snow to parts of the Mountain West and central United States Tuesday.

A storm “that swept through California with soaking rain, thunderstorms and hail at the beginning of the week” cruised at “a fast pace through Utah, Arizona, Colorado and New Mexico” and across the central and southern Plains, AccuWeather meteorologist Renee Duff said Tuesday. The storm was expected to “tap into just enough cold air to lay a path of accumulating snowfall in its wake.”

The same storm system “could even bring another wintry hit to the Northeast late this week, just prior to the official start of spring,” Duff added. “In addition, the storm is likely to be responsible for unleashing a multi-day severe weather and tornado outbreak across the South.”

For all the activity, however, temperatures are expected to quickly warm in the storm’s wake. By next week, highs are forecast to range from the 50s and 60s in the Upper Midwest and Northeast to 70s and 80s in the South.

Next-day prices on Tuesday declined across most regions, though dips outside of the Northeast were generally modest.

On the pipeline front, Pacific Gas and Electric Co. scheduled maintenance work for Wednesday and Thursday. “A cut of around 300 MMcf/d of flowing supply will result, and we expect to see increased storage withdrawals pick up the slack,” Wood Mackenzie analyst Joseph Bernardi said.

Pipelines in the Rockies, meanwhile, continued to post interruption notices tied to the late winter storm that blew across the region last weekend. Wood Mackenzie analysts noted that, as of Tuesday, Colorado Interstate Gas currently had three active forces majeure, affecting parts of its system in Wyoming and Colorado.