A surge in sanctioning oil and natural gas projects worldwide is set to nearly triple from 2018, with more than one-third centered around natural gas export facilities, according to an analysis Rystad Energy. 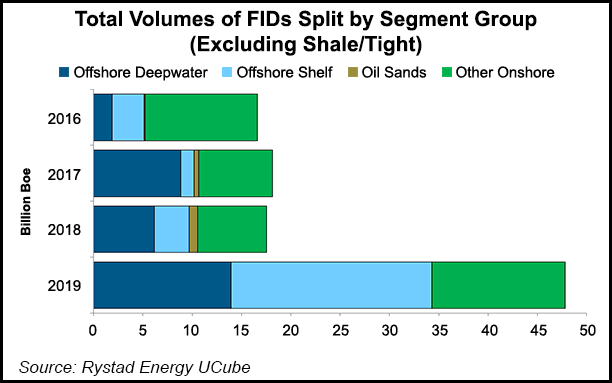 Final investment decisions (FID) announced this year could bring in well beyond 46 billion boe, the data indicated. However, while projects claiming positive FIDs in 2019 may not be a strong in North America, the analysis did not include shale/tight resources, the No. 1 onshore target in the Lower 48.

“We expect global FID volumes in 2019 to triple over last year, and 2019’s megaproject awards could lead to billions of subcontracting dollars in coming years,” said Rystad’s Readul Islam, upstream research analyst. “The only supply segment likely to shrink this year is the oilsands,” heavy oil production now concentrated in Canada.

However, “deepwater, offshore shelf and other conventional onshore developments are all poised to show substantial growth. From a geographical perspective, all regions are headed for robust growth except Europe and North America, still bearing in mind that shale plays are not included in these numbers.”

FIDs were off and running in the first half of 2018 and on track to outpace 2017. However, project deferrals during the fourth quarter, which coincided with a steep decline in oil prices, derailed many of the global prospects.

Three main factors are seen contributing to FID growth this year, led by demand for “greener” fuels, which includes LNG. Many delayed projects talso are expected to be sanctioned, and finally, Saudi Arabia is looking to establish an energy stronghold beyond the Middle East.

As demand for greener fuels rises, the “threat of an LNG undersupply developing by the mid-2020s is likely to spur sanctions for natural gas projects in Africa, Australia, the Middle East and Russia,” according to Rystad. LNG projects alone make up one-third of the estimated FID volumes this year.

North American projects figure big in the mix for this year, led by the recent FID for the 16 million metric ton/year (mmty) Golden Pass export project. Sponsors ExxonMobil Corp. and state-owned Qatar Petroleum plans to begin construction on the Texas coast in Sabine Pass before the end of March for the estimated $10 billion facility..

Also up for FID this year in the United States is Cheniere Energy Inc.’s Train 6 at its Sabine Pass, LA, after it commissioned Train 5 in October. As Tellurian Inc. draws more sponsors, it also is set to pull the switch by midyear for its planned 27.6 mmty Driftwood project in Louisiana.

In Canada, Bear Head LNG Corp. is inching forward after securing project participation and benefits agreements with Nova Scotia native and labor groups for its proposed terminal on the Atlantic coast. Overseas, the Anadarko Petroleum Corp.-led Mozambique LNG project is set to be sanctioned by mid-year.

After oil prices crashed in 2014, some operators put the kibosh on pulling the trigger on some projects until they had reduced the costs, leading to project delays.

“Now they are starting to play catch-up,” said analysts. “These delayed projects can make up almost a quarter of the FID volumes in 2019.”

And in Saudi Arabia, the kingdom “appears likely to green light three major offshore shelf expansion projects that would collectively account for nearly a fifth of global FID volumes this year.”

There are, as usual, downside risks to the forecast.

“This year’s harvest of FIDs are incredibly top-heavy,” said Islam. “Delays to a few megaprojects currently expected to be approved in the second half of 2019 could turn the volume down significantly.”

Rystad’s team also does not expect the 2019 FID surge to result in a proportionate increase in contracting opportunities for the oilfield service sector. For fields of 25 million boe-plus, which accounts for nearly all (97%) of the forecast volume this year, there’s an increase of less than 12% to the 2019 FID count in relation to the number of individual projects sanctioned in 2018, the analysis indicated.

“The silver lining for many suppliers as they navigate an ultra-competitive landscape is that the huge projects sanctioned during 2019 will generate contracts worth billions of dollars for facilities and services in the years to follow.”