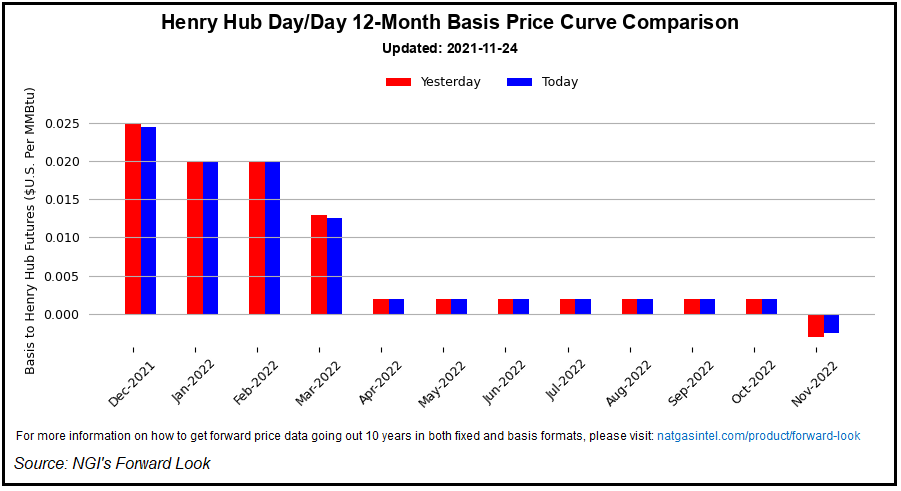 Historically, Henry Hub basis tracks within a penny or so of the comparable Nymex contract. However, the spread began to widen in late September and has continued to expand since then. It reached as high as 3.0 cents on Monday before contracting a bit. A similar basis premium is seen through the February contract, according to NGI’s day-over-day forward basis price comparisons.

Until now, there have been only a few times since NGI launched Forward Look in 2012 that Henry Hub basis prices have moved more than 1.0 cent above the Nymex futures contract. “Even then, it was never like this,” said NGI’s Nathan Harrison, senior systems engineer.

Not Your Daddy’s Natural Gas Market

A lot has changed since then.

NGI’s Patrick Rau, director of Strategy & Research, said liquefied natural gas (LNG) exports are likely the biggest reason that traders are willing to pay a premium in the physical market versus the futures market. He noted that a similar premium in LNG contracts linked to oil.

“Normally, oil price parity holds in the LNG market, meaning LNG prices don’t climb above 17.2% of the spot Brent crude oil price,” Rau said. “But the so-called slope of LNG in Asia has reached more than 40% in recent days.”

As for natural gas, Rau said there are two ways to settle the Henry Hub futures contract. Traders may sell the contract if they are long or buy it if they’re short. Alternatively, they can take it to physical delivery where they are obligated to make or take delivery of the gas.

“If more and more folks are doing that, then they are competing for gas in the market,” Rau said.

Not everyone needs gas at the Henry Hub, though. And if a trader exits the futures obligation, then the gas can be bought or sold as the trader wishes. However, the potential for make/take delivery is the reason the market sees short squeezes and massive liquidations ahead of the expiry, according to Rau.

“Lots of folks would be screwed if they were stuck with the gas and didn’t have transport out of the Henry Hub,” he said.

[Forward Look: Quickly understand where the price of natural gas is headed with these graphic day-on-day comparisons of NGI’s forward curves at 70 locations. View Now.]

With LNG export demand near all-time highs, netback prices on the Gulf Coast are roughly $30/MMBtu, according to NGI data. Furthermore, the thirst for LNG volumes appears unquenchable. Global natural gas prices remained strong Tuesday as benchmarks in Europe bounced back amid a colder forecast and supply shortages that are seen keeping the market tight. Asian prices also have unwavered amid supply issues at three LNG import terminals in the region and continued strong demand.

“The U.S. has never experienced a winter with so much gas exiting the country in the form of LNG, which could explain why we’ve never seen this kind of premium in physical versus futures gas before,” Rau said. “It’ll be interesting to see if that premium goes away when gas prices in Europe and Asia stabilize, but that likely won’t happen for a few more months at the earliest.”

StoneX Financial Inc.’s Tom Saal, senior vice president of Energy, told NGI that the widening basis spread between the Henry Hub contracts is a signal that the domestic gas market is undergoing a transition. After a multi-year period in which there were few concerns about intra-month supply, production growth now is limited and export demand has tightened up balances.

“People have to make the decision if they want to go into the market long or short,” Saal said. “Do they buy a little extra to cover that variation in demand?”

Complicating matters is the December Nymex futures contract’s expiration on Friday, a day in which most U.S. markets are closed for the Thanksgiving holiday. Traders, however, typically get their books squared away ahead of the holiday on Wednesday, Saal said.

The longtime energy analyst also noted that technical indicators for the December options contract showed implied volatility at slightly above 100%. “That’s high. We’re definitely in a new era now. This is something we’ll have to keep our eye on.”

Marex North America LLC’s Steve Blair agreed that LNG exports have dramatically altered the U.S. gas market. With the Northeast experiencing the only noteworthy cold in the country through early December, price risk is likely tied to global factors.

Global gas demand has lifted U.S. gas prices in recent weeks, according to Blair. “You’ve got two huge regions of the world that don’t have a lot of storage. We wouldn’t have had $6 gas without that.”

Saal and Blair separately noted that this isn’t the first time basis blowouts have occurred between the Henry Hub contracts. The market experts said the trend was fairly common in the 1990s and early 2000s, before the advent of shale development.