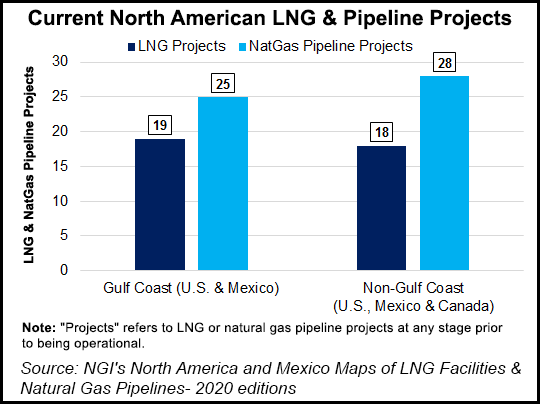 The developers of second wave liquefied natural gas (LNG) export facilities are closely watching the battle to stop fossil fuel infrastructure in the United States, which could upend some of their projects if more pipelines are delayed or canceled.

“Additional pipeline capacity is and remains an issue that the LNG industry is especially concerned about as they’re trying to develop projects,” said LNG Allies CEO Fred Hutchison.

Environmental opposition doesn’t pose an immediate threat to export facilities that are largely being developed in a more supportive region along the Gulf Coast, most of which already have key federal permits and export licenses. However, a series of setbacks for U.S. gas pipeline projects, including the Atlantic Coast Pipeline (ACP), Mountain Valley Pipeline (MVP) and Penn East systems, as well as the Dakota Access Pipeline (DAPL) oil system, could ultimately increase feed gas costs and embolden opponents, creating more regulatory challenges.

The opposition “can lose some of the legal battles, but win overall in terms of making these projects so challenging politically, and adding costs through delays and complexity, that it makes them not economically viable,” said Boston Consulting Group’s Alex Dewar, a senior manager at the firm’s Center for Energy Impact. “They’ve kind of cracked the code of what it takes to stop not necessarily every project, but at least a few of them.”

What’s more, Dewar said, public opinion is shifting. Natural gas is not viewed as favorably in some parts of the nation as it once was, something the opposition may increasingly look to seize upon to thwart new infrastructure. The term “fracked” gas, for example, which refers to the hydraulic fracturing stimulation technique that’s been used in oil and gas wells for decades, has grabbed the public’s attention in recent years.

“The public doesn’t want polluting oil and gas infrastructure in their communities that threatens their health and safety, and public opposition to these projects — from pipelines like ACP and Dakota Access — to fracked gas export facilities on the Gulf Coast — is only growing stronger,” said the Sierra Club’s Catherine Collentine, associate director of the Beyond Dirty Fuels campaign.

The oil and gas industry has fought Infrastructure setbacks for years, but some efforts are struggling. Dominion Energy Inc.’s recent decision to cancel the 600-mile, 1.5 Bcf/d ACP in July came after a lengthy legal battle. Sponsors of the 124-mile, 650 MMcf/d Constitution Pipeline, which would have also provided another route for abundant Appalachian gas, also was scrapped earlier this year.

DAPL in July was ordered by a federal district court to temporarily halt operations while an environmental impact statement is completed. An appeals court stayed the order earlier this month, but it upheld a decision to vacate key permits, preserving uncertainty that has faced the 1,172 mile Bakken Shale conduit.

If anything, the latest challenges have demonstrated that it’s “exceptionally challenging” to build fossil fuel infrastructure outside the Gulf Coast, Dewar told NGI. Small-scale LNG export projects in the Northeast that have faced strong resistance, along with the ongoing challenges confronting Jordan Cove LNG in Oregon are further proof that pipelines aren’t the only infrastructure being delayed.

“At the end of the day, building an intrastate pipeline across Texas is a heck of a lot easier than building it across state lines in other areas of the country,” said East Daley Capital Advisors’ Matt Lewis, senior director of research. “Same thing with Louisiana, and that’s where most of the LNG facilities are being built.”

For now, many supply basins are “wildly overbuilt,” Lewis said. He estimated that there’s roughly 5 Bcf/d of pipeline capacity slated to come online over the next year in the Permian Basin alone, along with other projects underway in the Haynesville Shale to move more gas south. With most export capacity being built along the Gulf Coast, having enough feed gas supplies for export terminals should not be a concern for at least the next five years, he added.

The broader concern is in the Northeast, where it has become difficult to construct greenfield projects without encountering opposition. East Daley estimated that there’s up to 2 Bcf of excess takeaway capacity serving the Appalachian Basin, which could fill quickly in a region that is producing more than 30 Bcf/d in a weak market. Absent additional capacity in the years ahead, sustained Marcellus and Utica shale production could hit bottlenecks by the middle of the decade or sooner, especially if MVP were to run into more delays.

“You could potentially run into a situation where the Northeast runs out of egress because nobody wants to build a pipeline,” Lewis said. “So, you’d be maxed out at a certain production level.”

If Appalachian gas were stranded and more supply is produced in Louisiana, Oklahoma and Texas, prices could increase, while the shift in supply and demand dynamics could open up regional spreads and create more volatility.

“In an environment where you could build Northeast pipelines, you would see lower prices across the U.S., let’s call it a $2.50 normalized gas price, whereas without the Northeast being able to build pipes, it might be closer to $2.75 or $3.00 and that would hurt the economics of certain LNG projects,” Lewis told NGI.

U.S. gas exports would almost certainly be competitive at those rates, but less Appalachia supply could still hurt if the cheap volumes are cut off. Additionally, without a strong oil price recovery, associated gas production could remain subdued and cut into feed gas supplies in the future.

It’s difficult to gauge exactly how much Appalachian gas is being consumed by export facilities. Lewis estimated that about 10 Bcf/d is moved into Southeast markets, where it makes its way in various directions, including toward export facilities.

“It’s probably not imminent, we’re looking at five-plus years out, but that is one of the challenges to promoting confidence in U.S. LNG exports, particularly from the buyer’s side, when they’re going to be doing tolling agreements or buying capacity on a Henry Hub basis,” Dewar said of feed gas concerns. “There’s that risk of a higher Henry Hub price longer term, even though you have structurally very low prices at the wellhead in the United States.”

Export projects are already facing a daunting market as a supply glut and declining prices that were evident before the pandemic were exacerbated by Covid-19 and the resulting demand destruction. Many second wave facilities have been impacted by the weak global economy.

According to BTU Analytics LLC, at least seven second wave facilities totaling 14 Bcf/d-plus have delayed final investment decisions (FID) or been forced to change their plans primarily because of the pandemic.

Even in good times, developing a major export project carries with it a challenging laundry list of hurdles from project financing and engineering, to securing offtake agreements and lining up supplies. The prospect of increased environmental opposition adds another layer of complexity.

Hutchison noted that different facilities also have different needs. Take the Rio Grande and Annova LNG projects for example, two of three export facilities under development in South Texas in Brownsville on the  Mexico border. Rio Grande is designed to export 27 million metric tons per year (mmty), while Annova is designed with only 6.5 mmty capacity.

The Rio Bravo Pipeline under development by Enbridge Inc. would utilize twin 42-inch diameter pipelines to move 4.5 Bcf/d across 137 miles of Texas from the Agua Dulce supply hub near Corpus Christi, TX, to the Rio Grande facility. Meanwhile, Annova has cut a deal with Enbridge for the existing Valley Crossing Pipeline to move supplies from Agua Dulce to Brownsville, which doesn’t require any construction.

Pipeline design, securing supplies and opposition have already been rumored to slow some Gulf Coast export projects down.

“Security of supply is an ongoing issue, an ongoing concern in folks’ minds and that’s why it’s good to be positioned in a spot where there’s lots of alternatives,” said Hutchison, whose trade group represents companies working in the LNG space.

“All of our members, except the ones that are past FID and are building projects, all of them are still really vitally concerned about market access issues, market development issues.”

Texas LNG is also planned for Brownsville, which is near the popular beaches on the Padre Island National Seashore. Groups in the area have mobilized against all three projects. Farther north, Kinder Morgan Inc.’s Permian Highway Pipeline, which would move about 2 Bcf/d from the Permian Basin’s Waha hub in West Texas to the Texas coast, has met resistance from cities and landowners in the iconic Hill Country.

With an election on the horizon, there could also be more scrutiny for fossil fuel projects at the federal level depending on the outcome.

“LNG exports have not been subject to this significantly yet, but I think exports have certainly garnered the attention of activists, and I think that these developers need to be aware of how this tide that’s turning against natural gas can impact their projects in a multitude of ways,” Dewar said.