Natural gas forward prices were generally higher during the Oct. 8-14 period, supported by lower production and chilly weather forecasts for some parts of the country later this month. However, the markets also faced some headwinds, namely another setback in the full recovery of Gulf Coast exports and weak demand in key Lower 48 regions. 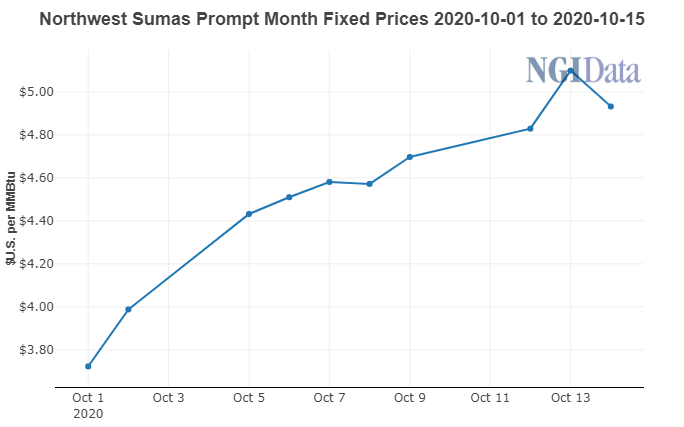 November forward prices ultimately averaged only 2.0 cents higher for the six-day period, while the winter strip (November-March) climbed an average 4.0 cents, according to NGI’s Forward Look. Gains were more pronounced for next summer (April-October) at an average 10.0 cents. The sharp rise for the summer was attributed to projections of a steep drawdown in storage this winter that would necessitate a massive rebuild during the next injection season. Winter 2021-2022 prices were 9.0 cents higher on average.

For a shoulder season, there were quite a few balls in the air impacting forward markets during the Oct. 8-14 period. At the forefront of trading was the ongoing uncertainty related to liquefied natural gas (LNG) exports, which intensified once news spread of a sunken barge in the Calcasieu Ship Channel in the aftermath of Hurricane Delta.

Feed gas deliveries to U.S. LNG facilities took a hit over the weekend once Delta crashed ashore Lake Charles, LA. Flows dropped to around 5.0 Bcf on Oct. 10, off from around 7.5 Bcf a few days prior. Once operators determined that Delta had caused minimal damage to Gulf Coast facilities and with their power intact, flows climbed back to 7.5 Bcf by Wednesday and then neared 8 Bcf by Friday, according to NGI’s U.S. LNG Export Tracker.

Where feed gas demand goes from here is unclear. Sabine Pass LNG has been hampered by the force majeure that Kinder Morgan Inc. implemented on the Natural Gas Pipeline Co. of America (NGPL) after Delta caused flooding and power outages in Cameron Parish, LA. By Wednesday, the pipeline operator said it was returning two more compressor stations (CS) to service. A third was restored on Thursday, though several other locations along the pipeline were still offline.

Meanwhile, late Tuesday, a sunken barge was discovered in the Calcasieu Ship Channel, blocking access to Cameron LNG. The news spread through the gas market like wildfire and prompted, at least in part, a massive sell-off at the front of the curve during Wednesday’s session. The barge was one of three obstructions said to be in the ship channel, including an oil rig and a recreational boat.

As of midday Friday, the U.S. Army Corps of Engineers, U.S. Coast Guard (USCG) and others were still working to remove the recreational boat. Army Corps spokesperson Ricky Boyett told NGI the oil has been removed, and plans were expected to be finalized over the weekend for the barge’s removal.

USCG Guard Lt. Jessica Galarza on Thursday offered no timeline as to when the ship channel would resume full operations. The port was not permitting vessels with drafts of 25 feet or higher to move through the channel, and other restrictions were in place for vessels with drafts below 25 feet. LNG vessels typically have up to a 37-foot draft when loaded.

“We can’t provide a timeline for when the port may resume full operations. What we’re looking at is doing that safely,” Galarza told NGI.

Analysts at EBW Analytics Group warned that even though demand may creep higher now that NGPL is nearing a return to full operations, potentially adding 1.5 Bcf/d-plus of demand, the Calcasieu Ship Channel may stay closed for most of the coming week. Dredging of the ship channel, which was wrapping up post-Hurricane Laura when Delta hit, is now back to square one.

“This suggests that even if the barge had not sunk, a week or more might be needed for the Coast Guard to finish its work, especially since extensive surveying will be required before large vessels are allowed to enter the channel,” EBW said.

Noting the challenge of removing the barge, the firm said the USCG appeared to be committed to aggressively completing the work, suggesting an extended delay was unlikely. “Even in a best case scenario, though, removing the barge is likely to take much of next week and a lengthier delay is still possible.”

Even without feed gas demand at its full potential, supply/demand balances continue to tighten in the Lower 48. This contraction was on full display in the latest government storage report.

On Thursday, the Energy Information Administration (EIA) said U.S. storage stocks rose by 46 Bcf. The EIA figure was dwarfed by last year’s 102 Bcf build and the 87 Bcf five-year average and came in around 10 Bcf below consensus.

Participating in The Desk’s online chat Enelyst, Schork said he expected the next EIA report to also be an outlier given lingering effects from Delta. His base-case for end-of-October inventories is now 4.035 Tcf, while his low-case scenario is 3.984 Tcf.

Bespoke Weather Services chief analyst Brian Lovern said the reported injection was “very tight” in terms of supply/demand balances. This level of tightness may be tough to maintain, according to Lovern, but if weather can stay colder, it’s a bullish picture nonetheless.

“That is a big ‘if,’ however,” Lovern said. He expected the midday weather model runs to step back warmer. The trend in models so far, he said, had been to show too much cold in the 11- to 15-day outlook, which shifted warmer once it becomes the six- to 10-day forecast.

“There is cold on the maps, but has tended to be in the wrong areas to really boost natural gas demand,” he said.

NatGasWeather said the latest Global Forecast System maintained the bearish set-up for the coming week, but then trended cold for the end of October/early November. However, the forecaster warned that the weather data has been inconsistent after Oct. 24-25, and big changes are possible in time.

The November Nymex futures contract settled Thursday at $2.775, up 13.9 cents from Wednesday’s close. The prompt month held fairly steady on Friday as well, ending the week at $2.773.

A month from now, with the expectation that LNG demand may approach 9.0 Bcf/d even if Cameron remains offline, a rise in production may push back the widely projected increase in prices.

EBW said production is likely to jump higher to start November as curtailed output returns. Once production ramps up, the market may target higher storage levels in the early part of winter, but the remaining upside has narrowed.

“The market has begun to pick up on this massive undersupply,” with both Raymond James & Associates Inc. and Morgan Stanley issuing notes in the past week for average 2021 Henry Hub prices of $3.50 and north of $4.00, respectively, EBW said. “In our view, much will depend on winter weather, but the higher end of this range is entirely on the table.”

Extreme weakness in the Permian Basin cash market, including a dip into negative territory, spilled over into forwards during the Oct. 8-14 period.

Spot gas prices at Waha fell to minus 2.0 cents on Tuesday (Oct.13), the eighth time this summer that the lowest mark was below zero. The sub-zero price action occurred amid lackluster downstream demand in Texas and other neighboring regions.

Gas demand in California remained strong, however, with Southern California Gas system-wide demand coming in around 2.6 Bcf/d. That is typically enough to lead to price gains but still below the level that usually prompts Aliso Canyon withdrawals, according to Genscape Inc. analyst Joseph Bernardi.

Meanwhile, Permian production over the last week has decreased slightly, Bernardi said. A week ago, the firm noted that output was trending slightly higher than September, a month/month increase of 0.5%.

Maintenance beginning Friday (Oct. 16) on Northwest Pipeline (NWPL) was to cut about 280 MMcf/d of east-to-west flows through southern Washington, isolating the portion of NWPL’s system serving demand in Seattle and Portland, according to Genscape. Planned maintenance requires cut outs of the pipeline between Goldendale and Willard, WA, taking operational capacity through this segment to zero.

The work is scheduled to last through Tuesday (Oct. 20) and forces NWPL to source alternative molecules for supply to the Seattle-Portland demand corridor “because the affected section of pipeline is the only connection between those demand centers and the rest of NWPL’s system to the east,” Bernardi said.

East-to-west flows here have averaged 282 MMcf/d in the past 30 days and showed signs of decreasing already during initial cycles for Thursday’s gas day. The two main sources to make up these lost flows, he said, are the Sumas border point and Jackson Prairie storage.

Meanwhile, imports from Canada also were strained because of unplanned maintenance on Gas Transmission Northwest.