Liquefied natural gas (LNG) shipowners that recently capped off first quarter earnings season see a grim outlook for most of 2020 as global supplies teem, prices have cratered and demand wavers. 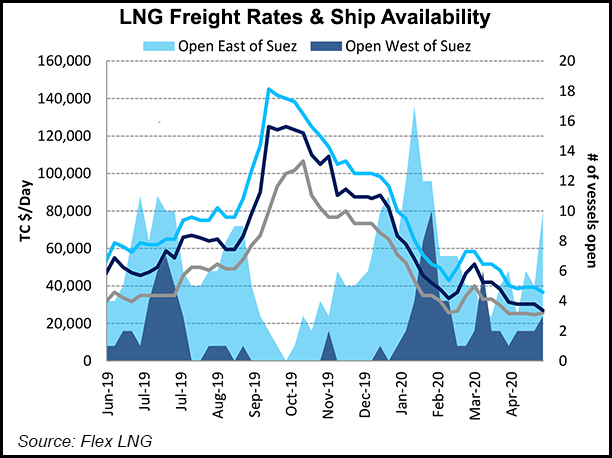 “The LNG market has been very challenging this year due to another mild winter and the global Covid-19 pandemic,” Flex LNG Ltd. CEO Oystein Kalleklev told analysts on the quarterly earnings call last week. “We have witnessed unprecedented demand destruction due to shut-downs of all major economies and more specifically shut-ins of cargoes due to historically low gas prices. These factors have adversely affected the demand for shipping and thus consequently freight rate levels.”

Kalleklev said management expects a lower level of LNG trading in the second quarter. The company’s time charter equivalent (TCE), or the average daily revenue earned by each of its vessels, is likely to fall close to $50,000/day. TCE averaged $67,740/day in 1Q2020, compared to $94,000/day in 4Q2019.

Natural gas storage stocks in Europe stood at 73% on Wednesday, while inventories at LNG import terminals on the continent were also abnormally high at more than 60% of capacity. That has put downward pressure on prices there and in Asia, largely disincentivizing the sale of U.S. cargoes. More than 100 Lower 48 cargoes are forecast to be canceled into the fall.

Flex anticipates a difficult environment through at least the third quarter before the freight market firms up.

Golar LNG Partners LP, which also reported first quarter earnings last week, expects much the same. Deteriorating market conditions, and in particular the collapse of the arbitrage spread between the United States and key markets in Asia and Europe, forced it to put its Golar Mazo LNG carrier in cold layup for the period. That idle time combined with winter downtime for another vessel cut its fleet utilization rate from 88% in 4Q2019 to 82%.

While the “market remains highly volatile,” Golar expects global LNG production in 2020 to grow from 1-3% above year-ago levels.

“Low near-term LNG prices, high summer inventories and expectations of rising U.S. gas prices on the back of reduced oil production are currently expected to pave the way for a contango and stronger carrier rates into the winter months,” Golar management said.

Flex and Hoegh LNG Partners LP also noted that the pandemic has created problems with crew changes, leaving seafarers on ships for a prolonged period of time with minor financial impact.

Hoegh management said the coronavirus and market conditions haven’t yet had a significant impact on its operations, but the financial outlook remains uncertain this year. A primary risk is exposure under its long-term time charters because of the credit risk associated with those that have ships under contract, management said.

“Payments are due under time charter contracts regardless of the demand for the charterer’s gas output” or vessel utilization, Hoegh said. “It is therefore possible that charterers may not make payments for time charter services in times of reduced demand.”

Flex and Golar each reported net losses for the quarter, while Hoegh said year/year profits dropped.

Norwegian shipbroker Fearnleys AS said Wednesday “vessel availability is creeping up” as the market continues to deteriorate, but there are some bright spots.

Despite high inventory levels in Europe, demand is slowly returning in Asia as lockdown measures ease. Wood Mackenzie also noted Wednesday that U.S. offtake from Asian buyers remains relatively stable, with most in the region not yet having canceled cargoes under long-term contracts.

European reloads might also increase as sellers look to capture value in other markets given the continent’s surplus, which is encouraging for shipping demand, Fearnleys said. The firm added that shipowners are also “entertaining creative ideas” when it comes to rates.