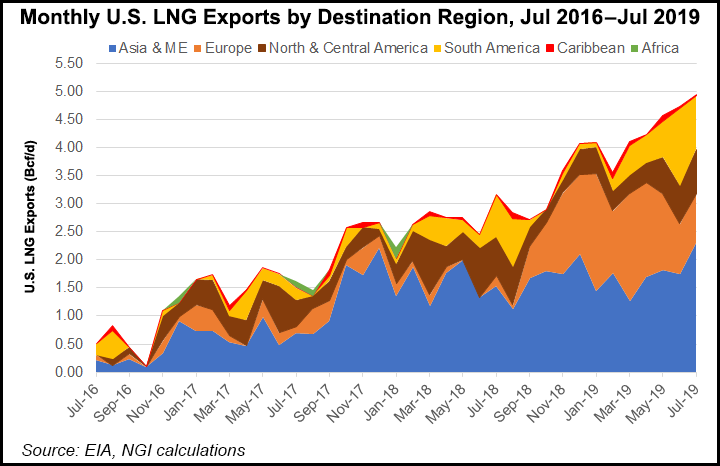 The LNG carriers will be used by oil major ExxonMobil Corp. to transport its global LNG production, SHI said. The vessels are mated with a re-liquefaction system and its latest smart ship solutions. The ships are slated to be delivered by March 2023.

SHI and Russia’s Zvezda Shipyard signed a contract last month to build icebreaking LNG carriers for the Novatek-led Arctic LNG 2 project. SHI will assist Zvezda with construction of the carriers and provide technological support. In December 2017, the world’s first ice-breaking LNG carrier, Christophe de Margerie, was successfully loaded from the Yamal LNG project located at Sabetta on the Yamal Peninsula in Northern Russia.

A typical modern LNG ship is approximately 975 feet (300 meters) long,140 feet (43 meters) wide and has a draft of about 39 feet(12 meters), according to The International Group of Liquified Natural Gas Exporters (GIIGNL).

The use of smaller LNG carriers is projected to grow, according to many shipping analysts, while the increase of small-scale LNG, including LNG to power facilities, particularly in Asia and in the Caribbean, as well as using LNG as bunker fuel for ships and for the trucking industry, should also increase the demand for smaller LNG carriers.

Currently, the LNG shipbuilding market is suffering growing pains amid the ongoing buildout of LNG liquefaction capacity around the world. There is an undersupply of new vessels available to transport the fuel, although a milder than usual summer in Asia is keeping charter rates subdued, KNect365 Maritime said in a recent report.

The increase in LNG volume traded on the spot market is also impacting the availability of LNG carriers for some producers who want to offload uncontracted volumes as well as major trading houses. “The share of spot LNG imports reached just over 30% of total LNG imports in 2018, amounting to some 126 billion cubic meters (bcm) — an increase of 65 bcm since 2016, or 10.5%,” the International Gas Union said recently in its 2019 Wholesale Gas Price Survey.

The increase in pure spot trading will continue, particularly as more supply enters the market from new LNG projects in the United States, which have more flexible contract clauses as well as the absence of destination clauses that have historically prohibited or limited the resell of cargoes. Flexible LNG contracts in the United States are helping to create a global, commoditized spot market and transforming project financing models, the American Petroleum Institute said in May.

Moreover, the delivery of new LNG vessels through the end of the year will not assist the carrier supply situation greatly, as most are already committed to specific off-takers, with only a very small proportion available for spot chartering, KNect365 said. The trend towards a tighter market has been driven by the lag between new liquefaction capacity coming onstream and the delivery of new vessels, as well as by the growth in LNG exports from the United States.

Since it takes around two-and-a-half years to build an average sized LNG carrier, and because liquefaction capacity additions are expected to drop off at around the time most of the vessels now under order enter service, the LNG carrier market is likely to start loosening sometime around the early 2020’s, KNect365 said.