Liquefied natural gas (LNG) cargoes are returning to Europe after a hiatus that saw vessels flocking to Asia amid a historic cold snap last month. 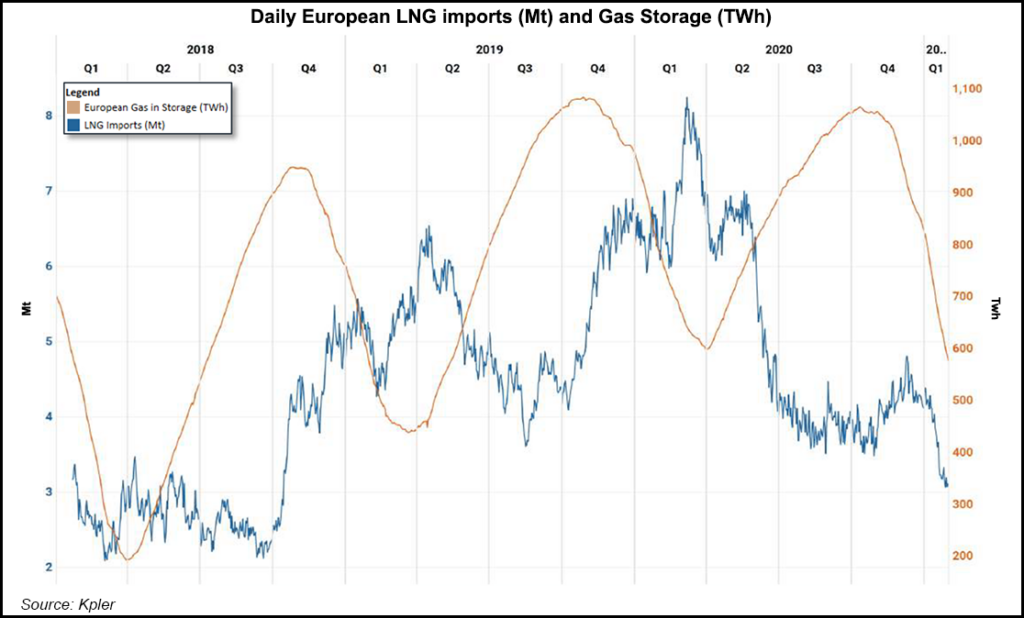 Milder weather in Asia along with stronger supply levels have spot prices for March delivery trending below $8.00/MMBtu, disincentivizing European reloads and marginal cargoes from the United States. Asian spot prices skyrocketed above $30 in January amid a supply crunch, but they began falling in the second half of the month. Meanwhile, prompt prices in Europe have gained since Tuesday on record carbon prices that make gas more competitive with coal and colder weather forecast for next week.

Alex Booth, head of research at data intelligence firm Kpler, said during a webinar Thursday that four vessels so far have been diverted back to Europe as Asian prices have softened. The UK, Netherlands and Belgium are set to receive a combined 11 cargoes through Feb. 19, according to Schneider Electric.

Tudor, Pickering, Holt & Co. (TPH) said Friday that European imports declined by 55% year/year in January. During the same time, Japan and China combined to consume 50% of all LNG cargoes, according to TPH.

During the scramble for LNG to meet heating demand in Asia, buyers turned to more remote suppliers in places like the United States, which boosted vessel charter rates to a peak of $322,500/day on Jan. 8, according to Spark Commodities assessments. They’ve since fallen to $115,250/day this week as the market has loosened and vessels aren’t tied up on longer routes to Asia. It typically takes a ship about two weeks to travel to Europe, whereas a passage via the Panama Canal to North Asia takes 30 days from the Gulf Coast.

Buyers have dumped LNG in Europe over the last two years or so amid a supply glut and weak winter weather. The continent’s robust import infrastructure and large storage facilities make it an ideal balancing arm. Storage inventories filled rapidly last year, which weighed on global prices, but that trend reversed this winter.

“LNG supply to Europe is still low compared to normal due to the cold winter we see in other parts of the world, especially in China, and gas storage levels in Europe are low compared to the seasonal average as a result,” said trading firm Energi Danmark in a note on Friday.