Construction schedules are under review in British Columbia (BC) for its entry into the global natural gas export market as a result of labor force limits that provincial public health authorities adopted to counter the impacts from the pandemic. 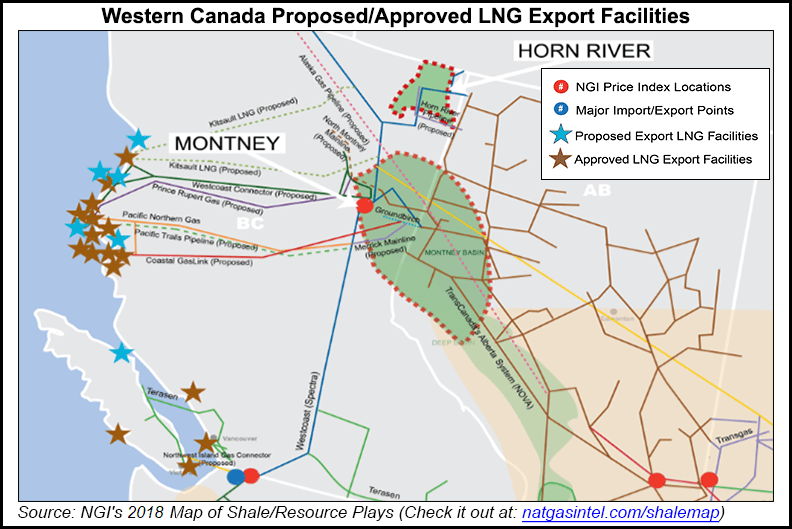 CGL initially would transport more than 1.7 Bcf/d from the Montney, Horn River and Cordova basins in the Dawson Creek area.

“As work at site progresses with a reduced workforce, our focus will be on environmentally sensitive, regulatory required, and time-sensitive work scopes,” said Kenny and Molz. “We remain committed to delivering first cargo by the middle of this decade.”

“In the immediate term there will be significant impacts to our ability to ramp up our workforce and progress project construction.”

The directive affects not only activity at CGL and LNG Canada. LNG Canada last March had reduced its workforce by half as the pandemic began spreading across North America.

The rules allowed this year’s planned CGL construction labor force to start at 400 workers in early January and grow in stages to 1,223 as of February. The LNG Canada quota started at 512, increased to 1,162 as of next week (Jan. 20), and is open to grow later.

Although the Trans Mountain project has to adapt to similar public health restrictions, the oil pipeline’s sponsors have informed the Canada Energy Regulator that its BC construction schedule has not changed. No worker quotas have been ordered on the expansion project’s Alberta legs.

“The current seasonal slow-down in large-scale industrial operations provides an opportunity to help break the cycle of transmission of Covid-19 associated with them,” said the BC public health order for only a gradual return to work.

“A rapid return to full operating capacity on the part of large-scale industrial operations, with the attendant rapid return of large numbers of workers to the worksites and industrial camps, will likely further fuel and accelerate the cycle of transmission of Covid-19 among the workers and the surrounding communities.”