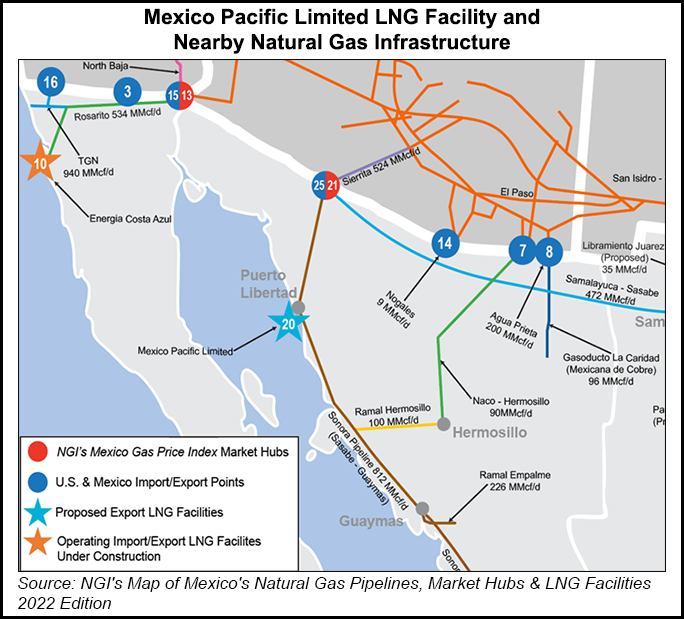 “We saw a lot of interest at the end of last year,” Shanda said, but “this year, it’s just been incredible.”

Front-month Japan/Korea Marker (JKM) prices, the benchmark for LNG delivered to Asia, settled at $18.650/MMBtu on Wednesday (Sept. 8), compared to $4.914 for the U.S. benchmark Henry Hub.

By allowing shippers of gas produced in the Permian Basin of West Texas to bypass the Panama Canal, MPL will offer “the most competitive price for LNG into Southeast Asia on a landed cost basis,” Shanda said.

To date, he said that 22 million metric tons/year (mmty) of binding offtake capacity is under negotiation for the project, including 14 mmty for which memorandums of understanding (MOU) have been signed.

Another handful of potential offtakers have opted to skip the MOU process and move straight to discussing binding offtake agreements.

Shanda said MPL is aiming to close binding offtake agreements for the first two trains of the project by year-end, and to reach a final investment decision in early 2022.

This would keep MPL on track to hit its target of bringing the first two trains, with a combined capacity of 9.4 mmty, online in 2025, “when that supply-demand gap starts to open up,” Shanda said. Once the first two are online, the third is likely to follow quickly, bringing capacity to 14.1 mmty. Longer-term, MPL is eyeing six total trains for a combined 28.2 mmty, Shanda said, noting that the final three trains would be built on the same 300-acre footprint as the first three.

Shanda said that while the pandemic has slowed the regulatory approval process somewhat in Mexico, MPL last month obtained approval from the Comisión Reguladora de Energía (CRE) for modifications to its liquefaction and pipeline transportation permits.

“So…they’re still paying attention to our project, and they’re still approving the things we need to get done,” Shanda said. The last pending regulatory hurdle is a natural gas export permit from CRE, which MPL hopes to obtain within the next few months.

MPL will source its gas from the Waha hub in the heart of the Permian.

“We haven’t had to really seek out places to buy gas, everybody’s been coming to us,” Shanda said.

The Puerto Libertad project will connect to Sempra Energy’s Sonora Pipeline Phase I, which transports gas from the U.S.-Mexico border south of Tuscon, AZ, through Sonora and the northern part of Sinaloa state in Mexico.

Only a fraction of the capacity on each of the two pipelines is currently being used by anchor shipper Comisión Federal de Electricidad (CFE), Shanda said, explaining that there are “no gas sinks,” i.e. demand clusters, along the pipeline routes.

CFE is Mexico’s state-owned power company and among the largest natural gas marketers in North America.

Shanda said MPL expects to purchase gas from CFE as well as numerous other marketers, explaining that “it’s a really good fit for us with CFE.”