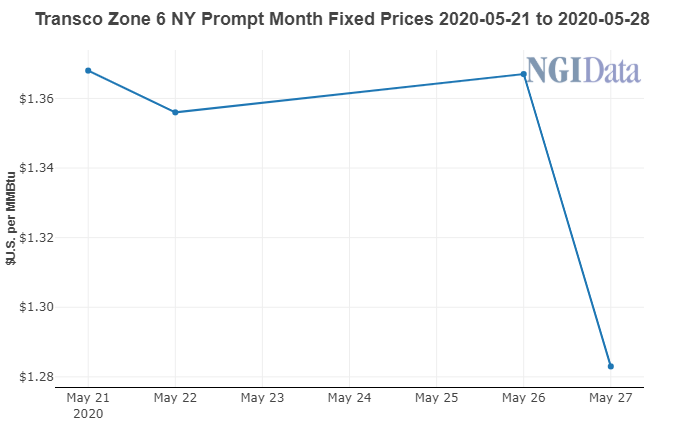 However, forward prices for July and beyond posted small gains over the five-day trading period on a projected bump in demand as the nation begins to reopen and on expectations for a hot summer, Forward Look data show.

After large erratic moves over the past several weeks, the May 21-27 period culminated with prices along the forward curve not far removed from where they started. The small moves were similar to those seen in Nymex futures, where the Henry Hub June contract expired Wednesday at $1.722 and the July contract settled at $1.886, though July continued to fall on Thursday before bouncing a bit to close out the week.

Though week/week changes were small, EBW Analytics Group LLC noted that the June contract rolled off the board 22.0 cents lower than when it assumed the front-month position. The July-October contracts fell even more over the past month, according to the firm, with the August contract leading the way with a 28.0-cent decline.

“This highlights emerging shifts in the shape of the forward curve,” EBW said. From a fundamental perspective, tumbling gas export expectations and “greater recognition” that weakness in the industrial and power sectors may take longer to recover were primary bearish drivers.

More than 30 U.S. gas export cargoes have been canceled for June, and international prices are signaling that oversupply conditions may linger. Much of that is from the mild winter that left global storage inventories brimming with supplies, but Covid-19 added insult to injury as it sapped industrial demand.

“How much gas in total are we likely to flow to Europe this summer? Seems like it should be zero,” said a market observer on The Desk’s online energy platform Enelyst.

For now, feed gas deliveries to U.S. terminals have recovered somewhat since falling to a fresh low of around 5.5 Bcf/d on Sunday. Volumes were at about 6.4 Bcf/d on Friday, though the increase appeared to be more of a blip on the radar rather than sustained momentum given that estimates for July cargo cancellations were coming in higher than June.

EBW pointed out that June cargo cancellations outpaced those in May. In addition, Covid-19 is ravaging South America and likely slashing anticipated heating demand during the southern hemispheric winter. Furthermore, the Asian rebound in demand remains tepid.

“With LNG feed gas demand nearly 1.0 Bcf/d off recent lows, chances for a further sustained rebound appear bleak,” EBW said. The dismal outlook, coupled with the slow pace of increased demand from the industrial sector, has proven to be too much for the market to overcome, even with a “startling” decline in production.

EQT Corp. in early May curtailed 1.4 Bcfe/d to wait out higher prices. From the get-go, the Appalachia producer indicated that the duration was “subject to commodity price movements, relationships and resulting economics” and on Tuesday, management said the cuts could extend through June.

Nevertheless, with weather demand starting to build, Bespoke Weather Services said that unlike the last several weeks when it was difficult to build any “true” bullish case at the front of the curve, things are less certain now with demand coming back as the economy reopens.

The firm looked to the Energy Information Administration’s (EIA) storage report to shed some light on last week’s balance situation, with its projection of a 106 Bcf build expected to be well above the five-year average.

To the chagrin of market bulls, the EIA reported a larger-than-expected 109 Bcf injection into inventories for the week ending May 22. Bespoke said the triple-digit build “does reflect some tightening of supply/demand balances, as expected, though is not enough to put us on pace to avoid filling storage.

“We suspect some additional tightening will be seen over the next few weeks with the economy gradually coming back, but it remains to be seen whether or not it will be enough to get end-of-season projections below ”full’ levels.”

Prices could remain range-bound until the data shifts more decisively one way or the other, although with the July contract still above the June contract’s expiration, some near-term downside risks exist.

Indeed, weather models have at times hinted at the start of more widespread heat across the country, but then data often has turned cooler. On Friday, however, Bespoke noted that with projected Global Angular Momentum anomalies heading negative over the next two weeks, signifying the atmosphere’s move toward a La Niña base state, “confidence is increasing that hotter trends overall are the table we are playing at this summer.

“While not an extreme pattern at the moment, other than in parts of the central United States where stronger anomalies are most persistent, there is just a lack of cooling anywhere once beyond the start of next week. This keeps projected demand above even the hotter 10-year normal.”

The “one fly in the ointment” could be the tropics, as models still show potential for a Gulf of Mexico storm in the next eight to 12 days that could have some impact on the Lower 48. Monday marks the official start of the Atlantic hurricane season, but already the second storm of the season, Bertha, made landfall east of Charleston, SC, on Wednesday.

“If something does form, it would have implications on both LNG and demand if there is a U.S. impact,” said Bespoke.

Forward markets across most of the Lower 48 moved in line with Nymex futures, shifting less than a nickel across the curve amid the ever-changing supply/demand landscape because of the Covid-19 pandemic.

However, East Coast pricing hubs were uniformly lower across the front of the curve as the last remnants of winter faded and far milder weather moved into the region. Points along Transcontinental Gas Pipe Line (Transco) fell nearly 10.0 cents for the June contract, though small increases were seen starting in July.

The only stronger prices for winter were seen in New England, where pipeline constraints limit the amount of gas that can flow into the region. Algonquin Citygate June was down 8.0 cents to $1.347, July was up 1.0 cent to $1.648 and the balance of summer held steady at $1.570. Winter prices managed to slip a penny but firmly held above the $5 mark, Forward Look data show.

EBW noted that while growth in storage surpluses on a national scale continues, several factors have resulted in the opposite trend this spring in the East Region. Since the storage week ending April 10 and continuing through the week ending May 15, the year/year surplus in the East narrowed by 54 Bcf (1.5 Bcf/d) while the surplus versus the five-year average slipped by 33 Bcf (0.9 Bcf/d).

One of the contributing factors to the tightening of supplies, according to the firm, is that the East is less exposed to sources of Covid-driven demand weakness, namely LNG exports and industrial demand. These direct effects therefore are proportionally lighter. Furthermore, reductions in residential and commercial power sector demand are lower during the spring shoulder season in the East than in the Gulf Coast or Texas, where early season cooling demand plays a larger role, EBW said.

The East also got some late-season cold that boosted demand, and injections from local distribution companies (LDC) have been coming in lighter than expected, according to the firm. LDCs are primarily “reliability focused, not market-focused,” and aim to begin each winter heating season with enough fuel to ensure adequate supplies. If LDCs wanted to enter winter 2020-21 with similar inventories to year-ago levels, average injections from now through October would decline by 0.7 Bcf/d, further reducing local demand, EBW said.

All these factors have contributed to faltering regional production, namely from EQT, but others may follow suit, according to EBW. CNX Resources Corp. highlighted the potential to shape its production profile to maximize returns, and other leading producers are “undoubtedly” exploring similar options, EBW said.

“If producers elect to choke back wells or throttle down production, it may cause the East Region storage surplus to sink faster, eventually pulling forward an eventual rebound in local natural gas prices.”