The Panama Canal is a vital passage for moving goods from the Atlantic to Pacific oceans faster, and since its expansion in 2016 to accommodate larger vessels and increasing liquefied natural gas (LNG) traffic, it’s become a crucial route in moving LNG from the United States to Asia in a timely manner. 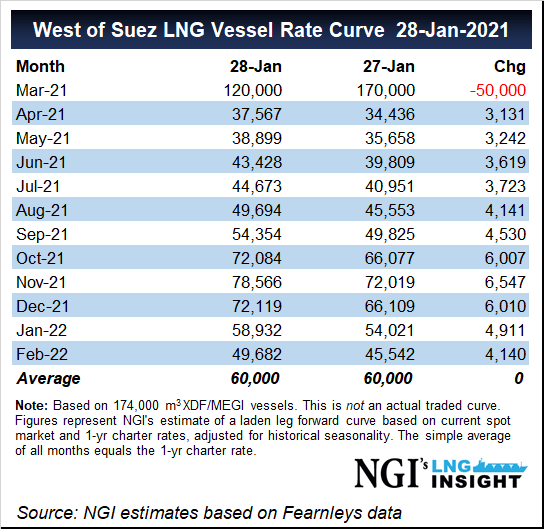 LNG traffic has continued increasing since the expansion, reaching a pinnacle this winter. As colder weather set in last fall and more U.S. liquefaction capacity has come online, wait times at the Canal began creeping up in October.

Longer wait times were more common in the dry season with the Canal’s older locks before it was expanded. By late November, however, some vessels were waiting up to 15 days to transit the waterway, inflating the costs of moving cargoes to Asia.

While the wait times have eased, they persisted to this month and contributed to a spike in Asian spot LNG prices that soared above $30.00/MMBtu. That raises the specter of future constraints as more capacity comes online on the Gulf Coast. It also begs the question of how much LNG can be moved to Asia on time if more trains are running at or near capacity.

Seasonal fog and staffing issues caused by the pandemic have contributed to the bottlenecks, but they’re largely related to LNG vessels that don’t have a pre-booked transit slot to pass through the Canal.

Transits are booked in advance by up to a year, and LNG carriers can book only one transit a day in each direction. Occasionally, the Panama Canal offers up to four daily transits.

Still, as historic cold settled in over Asia and LNG supply outages left inventories short as the cold persisted, Asian buyers were forced to turn to the Atlantic Basin for more spot supplies. This necessitated a far longer transit for ships. U.S. exports are considered to be more shipping-intensive as the distance to key demand centers is above the global average.

Spot rates to charter a vessel in the Atlantic Basin skyrocketed this month to $350,000/day as more tankers were pulled into the Pacific on lengthy passages.

The Panama Canal is the preferred route between the Atlantic and the Pacific as it generally takes 30 days to reach Japan from the Gulf Coast. However, shippers have opted to take longer routes through the Suez Canal, which takes about 39 days one way, and around the Cape of Good Hope, which takes about 45 days.

According to Bloomberg ship-tracking data, more than 20 LNG vessels have crossed the Suez this month, a record that represents the first time an alternative route has surpassed the Panama Canal.

The Panama Canal has also worked diligently to clear the backlog, which the industry recognizes, one shipbroker told NGI. Earlier this week, three LNG carriers made a rare northbound passage on the same day as more ships are making their voyages back from Asia.

Congestion at the waterway is not as much of a concern as it was earlier this month. Southbound passages to Asia are declining. Overall wait times have fallen to eight-to-10 days from their peak this winter of 10-15. The Panama Canal also is reportedly considering offering more booking slots for LNG vessels in the future.

The flurry of activity in the shipping market has slowed as January comes to a close and panic buying in Asia has ended with more time to line up cargoes for March and beyond. Charter rates have fallen to $188,500 in the Atlantic Basin, according to Spark Commodities.

“Global availability has increased as a handful of sublets have appeared in the Atlantic, coupled with vessels redelivering from winter charters in the Pacific,” shipbroker Fearnleys AS said in a note on Wednesday. “These signs point to a typical seasonal LNG cycle, and an inevitable correction on spot rates into March – yet the year-on-year average looks higher this year than last.”