Russia has factored heavily into the global dialogue surrounding this year’s energy shortages, particularly as it relates to the country’s role as the leading supplier of natural gas to Europe. 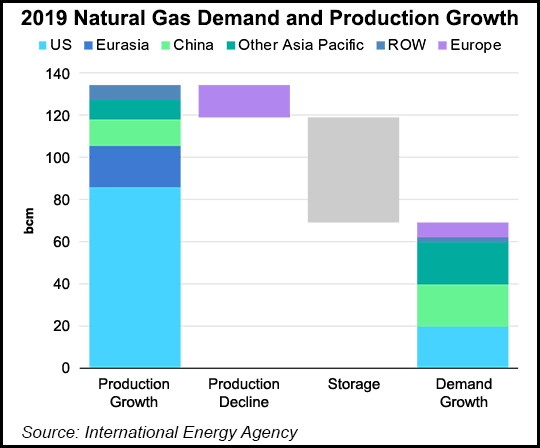 Weather patterns, supply chain issues, production outages and the pandemic, among other things, have collided to create shortages of everything from coal and natural gas to hydropower and wind generation in various parts of the world this year.

Europe has been hit particularly hard as it has continued transitioning to alternative energy sources and competed with other regions like Asia for natural gas and oil. The continent’s hydrocarbon production has declined sharply in recent decades.

What role does Russia have to play, and could it come to the rescue of Europe in its time of need as the headlines suggest?

Countries in the European Union import more than half of all the energy they need. About a quarter of that energy is natural gas, according to Eurostat. The International Energy Agency projects a 40% drop in European natural gas production through 2025. Declining production from the continental shelf and the planned closure of the Netherlands’ massive Groningen field, once Europe’s largest, are the primary drivers.

Enter Russia, the world’s largest pipeline gas exporter and a rapidly growing force on the liquefied natural gas (LNG) export market. It was the fourth-largest LNG exporter last year, according to the International Group of LNG Importers.

State-owned Gazprom PJSC holds the world’s largest natural gas reserves, operates the biggest transmission system and exports gas to more than 30 countries outside the former Soviet Union (FSU). The company exerts outsized influence, along with independents and large oil companies, in balancing both the Russian and European markets.

As natural gas inventories remain well below historical averages in Europe heading into winter, and as the global supply shortage has pushed prices to record levels, it’s easy to wonder if Russia could help alleviate the continent’s problems.

Fears over Europe’s reliance on Russia for energy supplies have long been a concern. They’ve also complicated the country’s efforts to bring online the massive Nord Stream 2 (NS2) pipeline, which has faced staunch opposition inside and outside Europe.

The 764-mile, two-legged system would move more than 5 Bcf/d from Russia to Germany. It has been billed as a way to fill the void in European gas supplies. The pipeline continues to face regulatory hurdles despite the fact that it’s complete, filled with gas and effectively ready for service.

Russia has maintained that it continues to fulfill all its contractual obligations to European buyers. However, a lack of clarity on why exactly the country hasn’t cashed in on the gas shortage in Europe by sending additional supplies there has raised questions about whether it’s using the energy crisis as leverage to get NS2 online faster.

The situation is complicated, and the answers to that question aren’t clear.

Like other gas exporters, Russia saw lower domestic production last year amid the Covid-19 outbreak and a drop in demand. In a recent white paper, Senior Research Fellow Vitaly Yermakov of the Oxford Institute for Energy Studies argued that Russia might not be able to balance the European gas market entirely on its own.

“These assertions implicitly assume firstly, that Gazprom has spare productive capacity; secondly, that the evolution of the geographical distribution of spare productive capacity in Russia has not resulted in infrastructural constraints, and thirdly, that Gazprom can easily rearrange the flows of its gas to deliver it to whichever transborder point is required by European buyers — complex issues,” he wrote of claims surrounding Russia’s agenda for NS2.

Meanwhile, messaging from Russian officials has been an enigma at best.

The Russian energy minister recently said domestic gas storage is almost full, suggesting the country could easily export more natural gas. The comments stand in direct contrast to recent reports that the country’s inventories are themselves low as domestic demand has bounced back this year.

Meanwhile, Russian President Vladimir Putin has said the country could easily increase exports to stabilize the global energy market, yet Russia has booked very little additional pipeline capacity at auctions throughout the year.

Gazprom released preliminary data this month showing that it produced 399.4 Bcm of natural gas during the first 9 1/2 months of this year, up 16.6% from the same period in 2020. The company also said its gas exports to countries outside the FSU jumped by 13.1% over the same time.

But as colder weather rapidly approaches, preliminary data also show that October deliveries to Gazprom’s primary markets are down. There’s also little hope of additional Russian supplies reaching Europe next month after the company elected to book little incremental capacity at recent auctions for deliveries to the continent via Ukraine, Poland and Belarus.

The conflicting signals and volatile markets have made Europe’s other gas suppliers that much more important this year. Norway, Algeria and Qatar are among the continent’s other major sources of natural gas. The United States has also been a key provider in recent years as it has looked to the region to sell increasing LNG export volumes given the continent’s proximity to North America.

Through August, however, just 30% of American LNG cargoes have made their way to Europe, according to NGI data. Over 40% have headed to Asia, where prices remain at a premium. More than 20% of U.S. LNG exports have moved to Latin America, an abnormally high amount, as the region has battled drought and is thirsty for energy.