European carbon prices have soared in 2021, reaching heights not seen since the continent’s emissions trading system (ETS) was established in 2005 and signaling what could be a longer-term trend across a region looking to further tighten climate regulations. 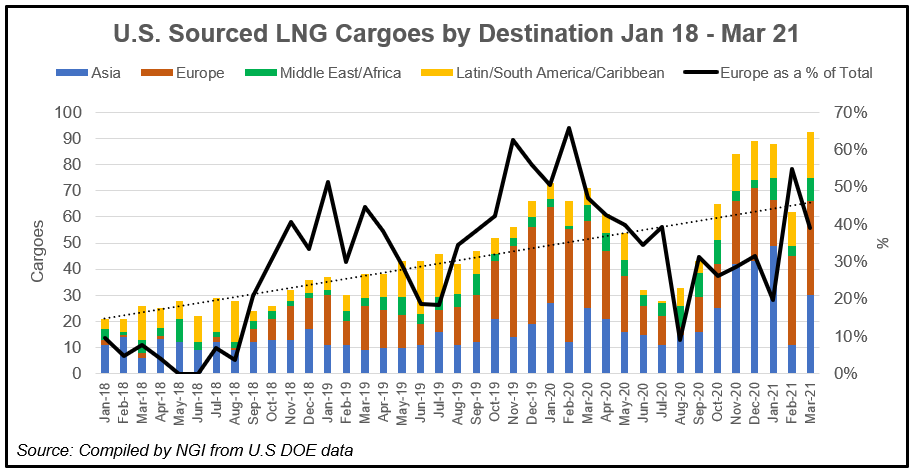 Carbon prices hit a record by crossing the 50 euros per metric ton mark in early May. They have continued to trade around 50 euros since in what’s proved to be a boon for natural gas demand, along with other market fundamentals that have combined to support prices for the fuel in Europe.

The European Union’s (EU) carbon market has a direct impact on natural gas demand in member countries. Because natural gas has a lower emissions profile than coal, higher carbon prices incentivize the burning of gas for power, which increases demand for the fuel. Understanding how the carbon market works and how it influences natural gas consumption provides additional insight on the forces that help drive liquefied natural gas (LNG) import demand on the continent.

The bloc’s ETS includes all EU countries, plus Iceland, Liechtenstein and Norway. The system limits emissions from roughly 10,000 installations in the power and manufacturing sectors. It also applies to airlines operating within member countries. The ETS was the world’s first international emissions trading system, and it remains the largest.

A cap is set on the amount of certain greenhouse gases that can be emitted by the covered installations. The cap is reduced over time so that total emissions fall, according to the EU.

Installations buy or receive emissions, which they can trade as necessary. A limit on the number of available allowances guarantees they have a value. Carbon pricing can be volatile as it is linked to supply and demand, which can be influenced by factors such as heating demand or economic activity at any given time.

One European Union Allowance, most commonly called an EUA, gives the holder the right to emit one metric ton of carbon dioxide or the equivalent amount of nitrous oxide and perfluorocarbons. The same is true in the UK, which left the EU’s ETS after it withdrew from the bloc last year and launched its own carbon market.

In April, after months of talks, the EU passed new targets to further curb the impacts of climate change. The bloc is now aiming to cut greenhouse gas emissions (GHG) by 55% by 2030, compared to 1990 levels. The European Commission, the EU’s executive branch, is soon expected to unveil various climate laws to bolster the GHG target.

According to the EU, the commission could also possibly propose to expand the scope of the ETS as it remains the bloc’s primary method for curbing pollutants. The system covers about 40% of the EU’s GHG emissions.

A more ambitious target for cutting emissions, combined with delays this year in allocating free allowances to industrial users, which receive them as an incentive to continue operating in the EU, and the arrival of speculative market participants from the financial sector have all combined to push carbon prices to historic highs, said Julien Hoarau, head of Engie EnergyScan.

“Despite this spectacular growth, statements from EU officials are clear, EUA prices have to go much higher to realize the energy transition,” he told NGI. Hoarau added that he expects carbon prices to go even higher in the coming years.

Higher carbon prices, low storage inventories after a cold winter, reduced pipeline imports and strong competition for LNG cargoes from Asian buyers have all combined to push the Dutch Title Transfer Facility (TTF) benchmark higher this year. TTF is Europe’s most popular gas hub. It has traded around $9/MMBtu this spring — a price more common during the winter.

The carbon rally has factored heavily into the jump in natural gas prices. The combination of coal and natural gas fired generation accounts for 30-40% of the EU’s electricity generation, according to NGI and Eurostat calculations. But use of the competing fuels at any given time depends heavily on how economic each is in producing electricity, mainly due to the cost of carbon.

The more economic the clean spark spread is to the clean dark spread, the more likely Europe will burn natural gas in favor of coal to produce electricity, everything else being equal.

As the EU works toward more stringent climate goals, it has provided even more upward pressure on carbon prices, giving further incentive to burn natural gas and find innovative ways to curb the impacts of climate change.

Coal-fired power generation across Europe has plunged along with the rise in EUA prices. Hoarau said next the industrial sector will be decarbonized at prices that are likely to be much higher than 50 euros/metric ton.

For LNG exporters, the rise in carbon prices expands the available market for the super-chilled fuel in Europe. While Asian demand has proved particularly strong this year amid colder weather and a resurgence of economic activity after the worst of Covid-19, buyers there have had to pay more to attract cargoes from farther flung suppliers like those in the United States.

NGI data show the two regions are close in accounting for the bulk of U.S. LNG exports through mid-May, with Asia offloading 37.9% of all American cargoes and Europe taking 36.1% of the share. The Middle East, Africa and South America have accounted for the rest.