The Atlantic hurricane season is underway, and the U.S. natural gas industry is taking extra measures this year to be better prepared for major storms that could have far-reaching impacts amid lower domestic storage inventories and tight global energy markets. 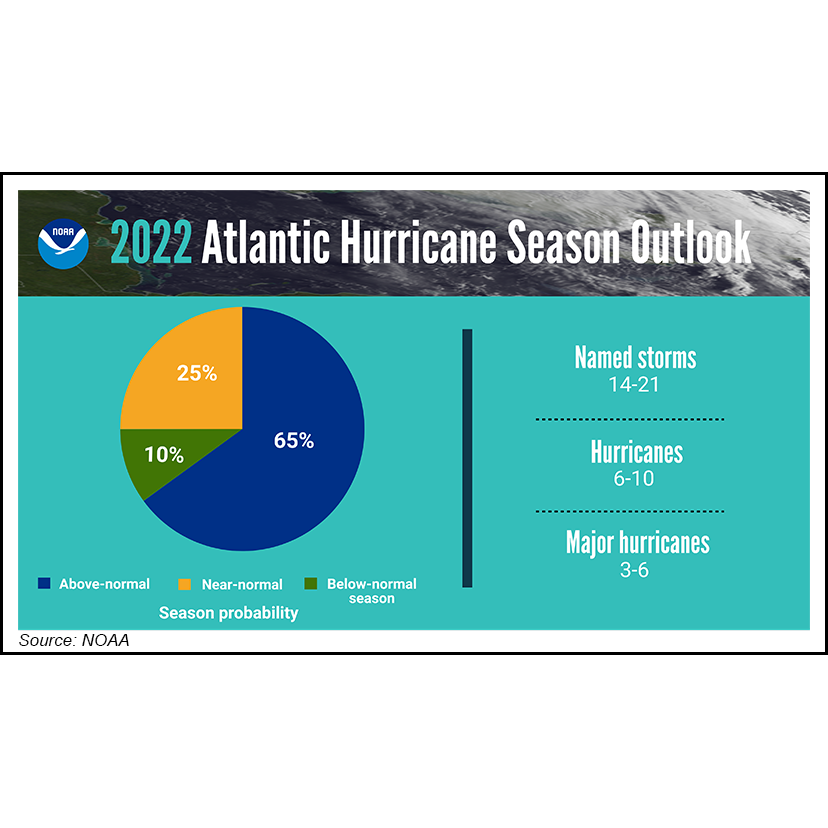 “For the global gas market, the stakes are higher with Freeport LNG offline, especially given the situation in Europe where gas supplies are already expected to be tight,” said FactSet energy analyst Connor McLean.

The natural gas and crude pipelines, petroleum product terminals and refineries, as well as countless wells and export facilities concentrated along the Gulf Coast have long made hurricane preparedness a top priority for the industry.

In recent years, more natural gas in the nation’s power stack, combined with an explosion in liquefied natural gas exports, has strengthened baseload gas demand across the country, or the minimum level that must be met on a daily basis. The increasingly inflexible demand has made U.S. gas prices more volatile and susceptible to inclement weather or unplanned events like the Freeport LNG outage.

Hurricanes can impact both natural gas supply and demand. When Freeport was knocked offline in June, the outage at the 2 Bcf/d facility cut into gas consumption and sent Henry Hub prices tumbling. The bulk of the nation’s LNG export capacity is located along the Gulf Coast, concentrated in a corridor susceptible to nasty hurricanes.

About 12 Bcf/d of LNG demand is scattered across facilities in Texas, Louisiana and Georgia, compared to just 2 Bcf/d of offshore natural gas production that’s vulnerable to hurricanes in the Gulf of Mexico. As a result, strong storms “are more likely to significantly disrupt demand than they are to disrupt supply,” McLean told NGI.

He added that the “issue is only going to become more acute over the next five years as LNG capacity becomes increasingly concentrated in Southern Louisiana.”

The National Weather Service (NWS) expects above-average hurricane activity this year. The NWS is forecasting 14 to 21 named storms during the season, which runs from June 1 to Nov. 30. Of those, up to 10 could become hurricanes, including three to six major hurricanes with winds of 111 mph or higher.

“These days, impacts of hurricanes are highly dependent on the hurricane’s severity and where it hits,” said Schneider Electric analyst Christin Kelley.

Watching a storm’s path is important to understanding its impacts. A hurricane that moves through the Gulf of Mexico is more likely to impact supplies and push prices higher, versus one that moves up the East Coast and takes a chunk out of demand.

The Saffir-Simpson Hurricane Scale measures the intensity of a storm and rates wind speeds between Category 1 and Category 5. A Category 5 hurricane is the strongest, with winds greater than 155 mph.

A hurricane’s forward speed and whether it stalls can cause destructive heavy rain and storm surge. Where a storm makes landfall and brings heavy winds, rains, floods and other damage can also have severe impacts on infrastructure like refineries, petrochemical plants and LNG export terminals.

Last year, Hurricane Ida knocked out gas supply from the Gulf of Mexico for weeks, while Hurricane Laura shuttered the Cameron LNG facility for more than a month in 2020.

Russia’s war in Ukraine, combined with the Covid-19 pandemic and soaring inflation have upended global energy markets. Given the unprecedented situation, the American Petroleum Institute (API) reached out to its members throughout the industry this year to ensure they were taking extra precautions to prepare for hurricane season.

Members said they were updating business continuity plans to help restore and recover after any disruptions, conducting more personnel training and stocking up on equipment like generators that could ultimately help operations through severe weather.

The industry also relies on standardized documents and guidance such as the API’s Oil and Natural Gas Industry Preparedness Handbook or a National Petroleum Council report released in 2014 to strengthen readiness. The National Incident Management System also guides all levels of government, nongovernmental organizations and the private sector to work together to respond to incidents like hurricanes.

Moreover, facilities are built or modified to withstand hurricanes, particularly those near water. For example, seawalls are constructed or equipment is raised off the ground to better protect against saltwater incursion.

The U.S. LNG export sector is still learning how to respond and adapt to hurricane season. Exports from the Lower 48 states began in 2016.

In the time since then, there have been few prolonged outages. But when Hurricane Laura made landfall near Cameron, LA, as a Category 4 hurricane in August 2020 it crippled LNG export capacity. The storm shut down facilities in Texas and Louisiana before it even came ashore.

Cameron LNG is designed to withstand a Category 5 hurricane and is elevated above the major flood stage. It is also equipped with emergency systems to shut down the facility safely if an evacuation becomes necessary.

The facility was knocked offline for over a month two years ago after its power supply was damaged and debris clogged the Calcasieu Ship Channel. The facility buys power from Entergy Corp., rather than producing electricity from natural gas like most other domestic terminals.

Cameron LNG spokesperson Anya McInnis said a new protocol was born from the evaluation of the 2020 hurricane season. The U.S. Coast Guard implemented a new process that year to ensure barges and rigs are adequately secured in advance of an approaching storm to help prevent them from blocking waterways.

McInnis said Cameron also worked closely with Entergy after the prolonged outage to upgrade the transmission system to strengthen its reliability and resiliency.

At the time Cameron LNG was knocked offline, though, global demand was weak and prices were far lower than they are today.

“If a major hurricane hits another LNG export facility and creates extensive damage, then the additional export outage would be quite bearish for U.S. natural gas and bullish for other global gas markets,” Kelley said of the 2022 season.