U.S. liquefied natural gas (LNG) developers are going to greater lengths to attract customers, setting the stage for American supplies to increasingly be tied to foreign benchmarks and testing traditional commercial models with new agreements that could make project financing even harder to come by. 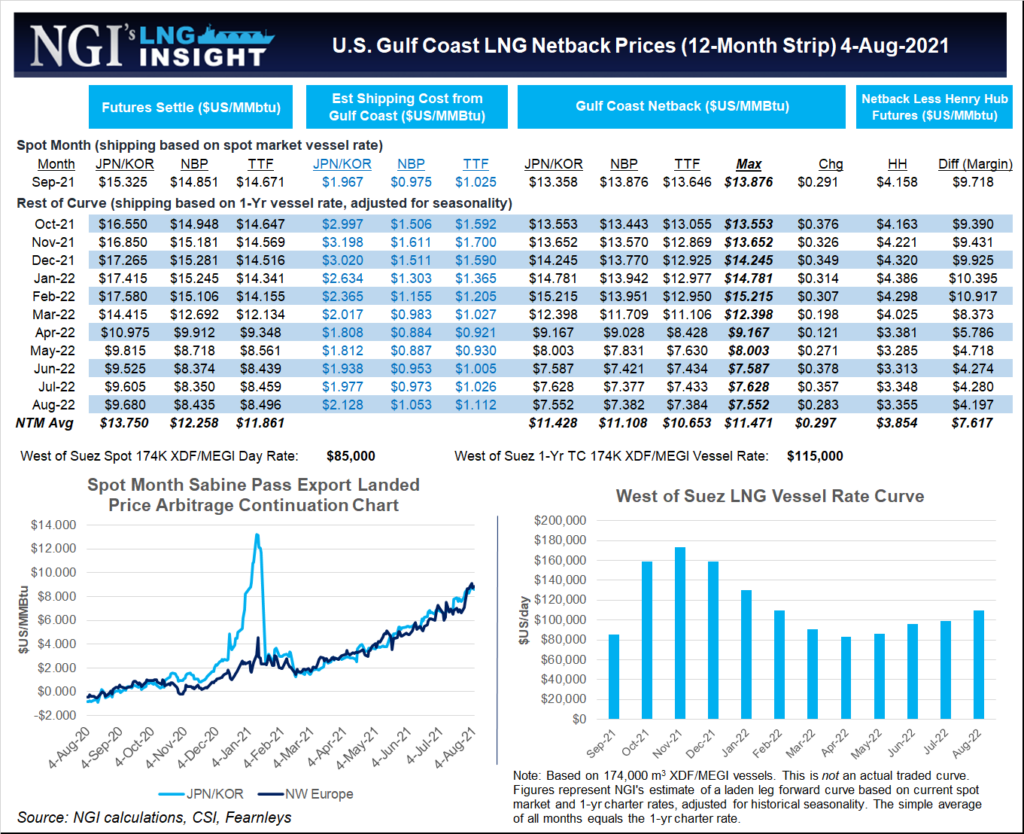 The question is, why?

Why would U.S. LNG buyers purchase the super-chilled fuel at prices linked to the Japan-Korea Marker (JKM) and the Dutch Title Transfer Facility (TTF) contracts instead of the cheaper Henry Hub? And why are U.S. suppliers more willing to take on commodity exposure with new contract structures?

The questions are complicated. Still, they’re worth exploring as a shift is occurring in how project developers are planning to bring online the next wave of export projects and expand existing U.S. terminals.

Tellurian added that it would sell LNG on a free-on-board (FOB) basis at prices linked to JKM and TTF netted back to the Gulf Coast to exclude shipping costs. The contracts have terms of 10 years each and include no fixed fees, considered a crucial element of securing project financing.

Meanwhile, Cheniere Energy Inc. agreed to purchase gas from Calgary-based Tourmaline Oil Corp. at prices linked to JKM after deducting shipping and liquefaction fees. Cheniere would then market and sell the LNG produced from Tourmaline’s supply. Cheniere has signed similar deals with Apache Corp. and EOG Resources Inc. The agreements, along with longer-term supply deals with LNG buyers, could eventually help lead to a final investment decision (FID) on an expansion project at the Corpus Christi export terminal in South Texas.

Cheniere has traditionally purchased gas under a model linked to Henry Hub. The company largely financed its existing liquefaction trains by securing 85% of their output under long-term sale and purchase agreements (SPA) with foreign buyers. Under those agreements, Cheniere secured gas for its customers and then passed through commodity risk to its offtakers, which generally paid 115% of the Henry Hub price and a liquefaction fee.

At other U.S. export facilities not owned by Cheniere, LNG buyers secure their gas to feed the terminals and pay tolling fees to have it liquefied. Terminal owners aren’t usually exposed to the volatility of commodity prices.

Out With The Old

“It’s certainly our view that long-term, Henry Hub is going to play much less of a role going forward than it did in the first wave of U.S. LNG projects,” Delfin Midstream CEO Dudley Poston told NGI. The company is developing a floating offshore LNG export project near the Louisiana coast. Delfin is exploring a variety of commercial arrangements.

In the years leading up to the Lower 48’s first LNG exports in 2016, oil prices were trading at around $100/bbl. Asian LNG supplies have historically been linked to oil prices. Last decade, buyers looking to secure the coming rush of U.S. LNG were looking for anything cheaper than crude. However, they didn’t always prefer LNG at prices tied to Henry Hub, which didn’t match their risk profiles. Asian and European buyers don’t have a lot of Henry Hub exposure in their portfolios, which can create volatility.

While Henry Hub has been fairly stable over the last decade, there have been stretches of volatility, particularly before the era of unconventional natural gas production. Last year was a prime example. Foreign benchmarks dipped below Henry Hub and it proved unprofitable to move U.S. LNG overseas, generating big losses for buyers and sellers.

To be sure, Henry Hub generally comes at a steep discount to both TTF and JKM, which have recently traded above $14/MMBtu. But Asian and European benchmarks better reflect the markets purchasing American exports. They’re more representative of LNG pricing.

Henry Hub on the other hand, is impacted more often by domestic factors. That makes it logical for LNG end-users to link to purer global prices such as TTF and JKM, according to Spark Commodities CEO Tim Mendelssohn.

Liquidity has also continued to increase on both JKM and TTF, Mendelssohn told NGI, making risk easier to manage. Moreover, as the LNG market has continued to evolve, he said the introduction of hedgeable netbacks with the listing of freight indices like those offered by Spark and others have made it possible for buyers to hedge delivered LNG prices and freight.

U.S. LNG is also sold largely on an FOB basis, meaning ownership is transferred to the buyers when it is loaded onto a ship at the terminal. FOB sales are a big selling point for U.S. export terminals. The buyer has the flexibility to resell its cargoes anywhere in the world. Some international suppliers restrict LNG destinations.

For trading houses like Gunvor and Vitol, more FOB supplies create ample trading opportunities and intrinsic value as they can sell it into various markets, regardless of the prices they’ve purchased the fuel at.

“The seller takes the mark to market risk in TTF/JKM deals – buyers can absorb this kind of volume all day long as they would rather lock in a small margin than ride the risk of price volatility bringing good years and bad years,” said LNG broker Melissa Lindsay.

Management has said it would not sanction Driftwood until it has enough upstream reserves to feed the project’s first phase. Producing its own gas may go a long way in controlling costs and managing commodity risk, but for now the company is not producing enough natural gas to generate the LNG it needs for the first phase.

Tellurian expects to exit 2021 producing only 95 MMcf/d from the Haynesville Shale. It has offered more common stock to raise $105 million to pursue additional upstream assets as it switches its focus to financing Driftwood with the offtake it needs in the bag.

Like other project developers, the company had a difficult time landing LNG customers in recent years. It scrapped its previous business model that required long-term buyers to purchase $500 million of equity for each 1 million metric tons/year. It pivoted in favor of the netback deals signed since May as the SPA market heated up after years of inactivity.

In recent years, spot LNG prices have been consistently lower than those tied to long-term contracts. But they’ve set records this year amid a lack of supplies and strong consumption that’s seen outstripping supplies by the middle of this decade. As the market tightens, buyers are keen to lock in term supplies and deals have increased as offtakers look to hedge their exposure to the spot market.

At the same time, suppliers have had to be creative in what they’re offering, particularly in the United States. According to the International Gas Union, there is 892.4 million tons/year of LNG capacity in the pre-FID stages across the world. Most of the potential capacity is planned for the United States and Canada.

Given the number of U.S. export projects in the works, there’s a limited pool of investment grade buyers available to take Henry Hub plus fixed costs. For every buyer willing to take those terms, there’s a handful of suppliers waiting to offer them.

In this sense, it’s practical that sellers are offering LNG on shorter terms at different indices. The more pressing question is how new U.S. projects may be financed under such models. For now, netback deals without fixed fees or higher floors are widely viewed as not bankable. Some developers have said they can’t get such deals financed.

“Something is going to have to change as compared to the more stringent financing structures of the past,” Evercore ISI’s Sean Morgan, director of LNG equities, told NGI. “The market is moving toward shorter tenors for SPAs.  In order to reach construction phases on some of these new greenfield projects, banks are probably going to have to get comfortable underwriting 10-year deals with more credit and commodity risk.”

There’s a likelihood that project investors could grow more comfortable with such structures. It’s a question of when that might happen — in months or years?

If Tellurian lands financing for Driftwood, it could provide a boost to other projects looking to get their facilities up and running. Capital markets tend to replicate things quickly once they are proven to work.

For Cheniere, it’s decision to tie more gas supply to foreign prices is a bit simpler. The company is using its strength as an incumbent and leaning on its robust marketing arm to turn a profit, Evercore recently said in a note to clients.

As one of the largest U.S. gas buyers and the largest LNG exporter, Cheniere has charter coverage to move molecules overseas and an experienced trading team selling into the medium- and short-term gas markets across the world. As a result, Cheniere can buy at JKM and sell at JKM with reduced risk. Moreover, while the company’s supply agreements with Tourmaline and other producers expose it to commodity fluctuations, the deals also include fixed fees for shipping and liquefaction that provide more stability.

But Cheniere will still need stronger bilateral deals in place with buyers to reach FID on its expansion at Corpus Christi.

For now, the market is watching to see how such strategies unfold. If they’re successful, more second wave projects could reach FID and a new era could begin for U.S. exports and the global LNG market as well.