Low natural gas prices probably will continue until this fall, and it would not be a surprise to see the front-month contract price for gas drop below $5/MMBtu, an energy analyst said Friday.

“The main reason for decreasing our gas price assumptions is the record level of storage and currently low prices that seem likely to persist into early fall 2007,” said Natixis analyst John White. “Thus, we believe that for the remainder of 2007 and especially in the latter half of September U.S. natural gas prices will remain under pressure.”

Weekly gas storage injections to date “have been normal,” White said, but “the high level of storage at the start of refill season has created another temporary oversupply situation as we enter the fall shoulder season. In the absence of tropical activity, we see little near-term support for natural gas prices and would not be surprised to see the front month contract price drop below $5.00/MMBtu.”

The analyst’s “typical assumptions” about U.S. gas prices project a range of $6.00-8.00/MMBtu based on underlying fundamentals. “However, in atypical times (i.e., after a hurricane impact, extremely cold or hot weather or record storage levels), we expect prices to rise above or fall below this range. Incorporated in our price range is when prices persist below $6.00/MMBtu a decline in LNG [liquefied natural gas] imports and fuel switching toward natural gas will follow. When prices exceed $8.00/MMBtu the reverse should occur.”

The Natixis analyst said “clearly, if natural gas prices persisted for several months below $6.00/MMBtu, there should be a decline in drilling activity, which would ultimately reduce domestic production. That said, we do not expect that situation to occur in [the second half of 2007] or 2008. Overall…we expect the U.S. natural gas market to be fairly balanced. If so, that would mark a significant change from the recent past.” 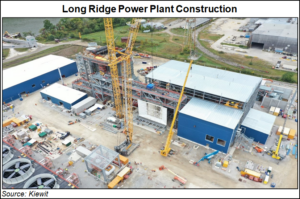 A natural gas-fired power plant under construction in southeastern Ohio plans to also use hydrogen to lower its emissions profile and become one of the first electric generators in the country to burn the fuel.  The 485 MW natural gas plant underway at the Long Ridge Energy Terminal that straddles Monroe County, OH, and Wetzel…