No matter what happens on election day next month, West Virginia voters will select another pro-energy governor, as both major party candidates have defended coal and touted natural gas during a blurry campaign that’s boiled down to which man can better manage those resources for the state. 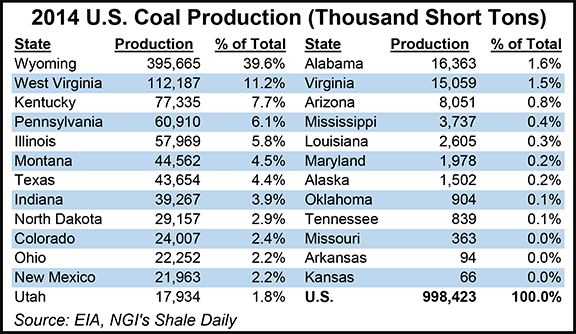 Democratic candidate Jim Justice, a billionaire who owns Appalachian coal mines, a luxury golf resort in the state and other businesses, has cited West Virginia’s natural resources as a key driver to the marketing campaign he envisions to attract more business and spark an economic renaissance. Republican candidate Bill Cole, who serves as the state Senate president and owns a large car dealership, sees the gas industry benefiting from his hopes of reforming and modernizing state government by cutting more red tape.

Justice, who’s been both a Republican and a Democrat over the years, isn’t backing Hillary Clinton, while Cole has at times steered clear of supporting some of Donald Trump’s policy prescriptions and comments. Both men, however, have aligned with Trump at times in a state he’s expected to take in a landslide.

“It’s very awkward; it’s an awkward election,” said Robert Rupp, professor of history and political science at West Virginia Wesleyan College. “West Virginia appears ready to support two [wealthy candidates], it doesn’t matter if they belong to different parties. They’re portraying themselves as outsiders. This state will go to Trump by one of the highest margins because we fit the profile of an overwhelmingly white, economically disadvantaged state. There’s a lot of Trump voters in the state, and they will carry him.”

While just two Republican governors have been elected in West Virginia since 1930, with the last taking office in 1997, the state has been trending Republican for more than a decade. Mitt Romney won the state by a wide-margin in 2012 and the party controls the state’s congressional delegation and the legislature. West Virginia has one of the more important tickets in the Appalachian Basin this election season. Ohio Republican John Kasich was elected to a second term for governor in 2014, while Democrat Tom Wolf won his first term as governor in Pennsylvania the same year (see Shale Daily, Nov. 5, 2014).

Energy is important in the state. It ranks fourth among all states in total production and is one of the nation’s largest coal producers, according to the Energy Information Administration.

The Marcellus and Utica shales have increasingly bolstered the state’s role in lifting gas production in the Appalachian Basin, with the formations accounting for most of the 1.3 Tcf in combined conventional and unconventional production there last year (see Shale Daily, Oct. 6).

Both Justice and Cole have railed against the Environmental Protection Agency for what they see as an unnecessary war on coal. Both candidates have said they’d like to see less dependence on state severance tax collections, which have fallen in recent years with the commodities downturn and contributed to budget deficits (see Shale Daily, Oct. 5). They both want to diversify the economy, and have talked about attracting ethane crackers and boosting state manufacturing with West Virginia shale. But gas also has been overlooked in the defense of coal.

“For a very long time, natural gas was the stepchild in West Virginia politics,” Rupp said. “The focus has only been on coal. Google the state flag, what’s on it? A coal miner. What we’ve seen in recent times is that stepchild has become the dominant brother, but it hasn’t yet been recognized by the political establishment that the future of the state lies in natural gas, not coal.

“Natural gas is suddenly the new kid on the block,” he added. “I always make the argument that politicians are the last to recognize great change. They’re still preaching coal.”

Cole spokesman Kent Gates doesn’t see it that way. He said natural gas is an important aspect of his candidate’s campaign.

“He’s committed to working with the private sector to help bring at least one cracker to the state, maybe more,” Gates said. “Gas is also a key part of his strategy for downstream manufacturing jobs. Using West Virginia natural gas to harness and bolster manufacturing is important, there’s no question about this.”

Under Cole’s leadership in the Senate, Gates said, lawmakers advanced a number of bills to help the gas industry further develop the state’s resources, including an effort in the last session to reduce the severance tax rate to ease expenses (see Shale Daily, March 4). Cole still supports reducing the severance tax for both coal and natural gas. He also wants to reduce the state’s business and industry tax, Gates said.

Cole has reached out to the gas industry to see what else can be done to aid development and he wants to reform one of the most “over-regulated states in the country,” by eliminating some rules and regulations, Gates said.

The Justice campaign didn’t return several calls and emails to answer questions for this story. Officials at the West Virginia Democratic Party couldn’t be reached to comment either. Justice has billed himself as a “marketer-in-chief” that could better attract business to the state. He’s noted it’s “blessed” with an abundance of natural resources that can make that happen. While he’s not in favor of cutting taxes, he wants to cultivate new markets for the state’s gas and better promote how cheap it is.

Rupp said the Democratic party is benefiting from the unconventional candidate in a state where Clinton is unpopular. His ties to coal and the Greenbrier golf resort have also helped. He’s a “likable” candidate, he added, that coaches high school basketball and has strong ties to communities in the state. If the latest polls are correct, it appears voters are poised to split the ticket between Justice and Trump. Both men have double digit leads in the state less than three weeks before the election. Mountain Party candidate for governor Charlotte Pritt and Libertarian Party candidate David Moran both polled under 10%, according to a MetroNews poll released last week.