Linn Energy LLC has agreed to raise its offer for Berry Petroleum Co. by $600 million, reinvigorating the mega-deal while the partners await a decision from the Securities and Exchange Commission (SEC). 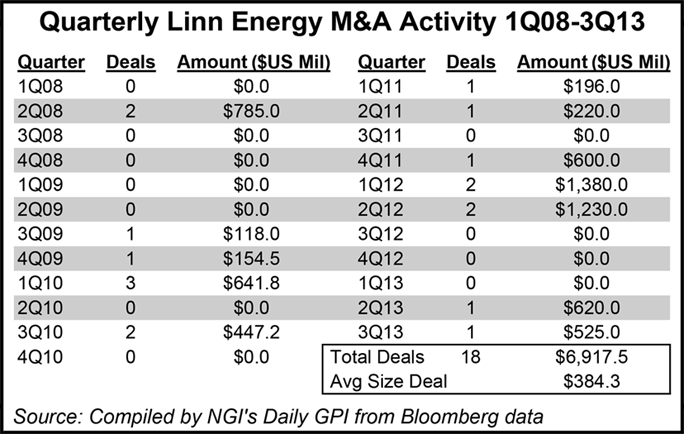 An amended agreement between Linn, LinnCo LLC and Berry increases the number of common shares LinnCo is issuing up to 1.68, from 1.25, for each common share of Berry outstanding prior to the merger, for total consideration of $4.9 billion including assumption of debt. The amended deal values Berry at $55.79/share, which is a 14% premium to Friday’s closing, Wells Fargo Securities analysts said in a note Monday.

“Today’s announcement shows that both management teams remain enthusiastic about this merger and incentivized to get it done — we believe the deal gets done,” Wells Fargo said. The analysts said the market was expecting a valuation increase for Berry. “Original terms implied a 20% premium for [Berry] shareholders while today’s announcement implies a 45% premium from pre-announcement levels.”

When the then-$4.3 billion deal was announced in February, it was touted as creating one of the largest independent exploration and production companies in North America (see Daily GPI, Feb. 22). The combined company would have production of more than 1 Bcfe/d and proved reserves of about 6.6 Tcfe (54% liquids). The companies said Berry’s “long-life, low-decline, mature assets are an excellent fit for an MLP/LLC” and will bring “meaningful growth” to Linn’s portfolio, adding a geographic presence in California, the Permian Basin, East Texas and the Rockies, as well as a new core area in the Uinta Basin.

On Monday, the merger partners also said they had extended the end date of their agreement to Jan. 31.

Earlier this year, Linn and LinnCo said the SEC’s Fort Worth, TX, office had begun a private inquiry involving the companies that could be relevant to the proposed merger (see Daily GPI, July 3). Wells Fargo said Monday that a soon-to-be-filed S4 could be made effective shortly after filing, given that the SEC issued no further comments on an Oct. 29 filing.