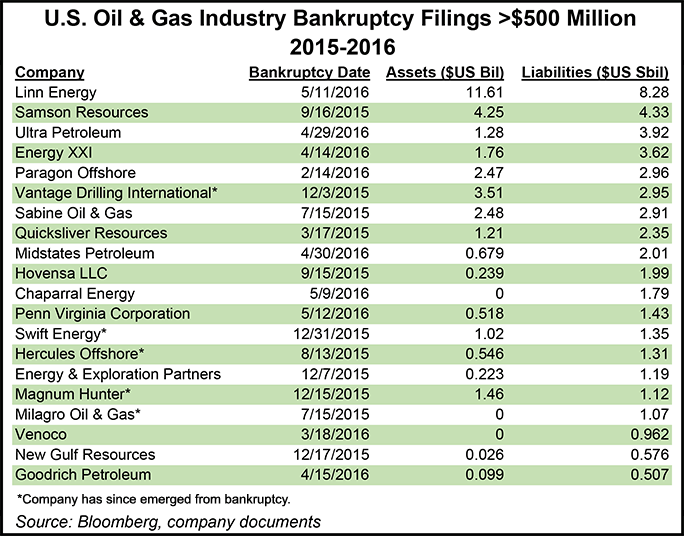 The producers in their filings cited the abrupt and sustained decline in commodity prices, which has sapped the financial strength of dozens of highly leveraged operators since 2014.

Linn and Penn Virginia each said they have restructuring support agreements (RSA) to continue to operate as as they retool their businesses.

Linn, long a natural gas-weighted operator, has an RSA for up to two-thirds of its debt. It has faced a steep financial climb as it has prowled for strategic alternatives (see Shale Daily, April 15; March 15).

“We believe the restructuring support agreement reflects the confidence of our first lien lenders in the quality of our assets and represents an important step forward for the company,” Linn CEO Mark E. Ellis said, “Like many others in our industry, Linn has been impacted by continued low commodity prices. We believe that these steps will provide us the financial flexibility to successfully manage in the current commodity price environment and, when combined with constructive agreements with our remaining creditors and potential third party financing, will provide a platform for future growth.”

Linn, which operates across nearly all of the U.S. onshore, expects to “continue normal operations,” Ellis said. Linn is the biggest operator in the Hugoton Basin of Kansas (see Shale Daily, May 22, 2014). It also has substantial reserves in the Rockies, the Permian Basin, California, East Texas/North Louisiana, South Texas, the Midcontinent, Michigan and Illinois.

Under its RSA, Linn’s reorganization is to include a new $2.2 billion reserve-based and term loan credit facility for Linn, consensual use of cash collateral to fund the bankruptcy cases and comprehensive restructuring of the debt. Linn does not plan to seek debtor-in-possession (DIP) financing because it anticipates it is going to have enough liquidity available to support the business.

The Linn filing is by far the biggest oil & gas bankruptcy filing in terms of total liabilities since 2015.

Penn Virginia is going to be able to reduce its long-term debt by more than $1 billion with the support of 86% of its senior noteholders and all of its lenders, management said. It has received a commitment for up to $25 million in DIP financing, $128 million in committed exit financing and a $50 million backstopped rights offering.

“This is an important step forward for Penn Virginia,” interim CEO Edward B. Cloues said. “Once the restructuring is implemented, the company will have substantially less debt and a much stronger balance sheet. We will be in a better position to navigate the current industry environment and leverage the value of our underlying assets and operational expertise. Importantly, the announcement…provides Penn Virginia with an expedited plan to emerge from this process with committed financing, a new money investment, and a clear path to future production and success.”

Like many exploration and production (E&P) companies, “Penn Virginia has been significantly affected by the recent and continued dramatic decline in oil and natural gas prices,” he said. “We believe using the Chapter 11 process is the most efficient way to achieve our financial objectives and deleverage the company’s balance sheet.”

Moody’s Investors Service Inc. on Thursday said it expects more defaults in the next year within the E&P sector. The global speculative grade default rate is forecast to increase to 4.6% from 3.8%, implying a baseline projection of about 150 defaulters over the next year.

Under Moody’s definition, a distressed exchange occurs when creditors are offered new/restructured debt or a new package of securities, cash or assets, which amounts to a diminished financial obligation relative to the original obligation. That has the effect of allowing a company to avoid a bankruptcy or missed interest/principal payment.

E&Ps “in particular have seen a rise in distressed exchanges amid the current slump in oil and gas prices,” Moody’s said. “Since January 2015, 46% of 57 completed distressed exchanges were executed by exploration and production companies. At the time of their default, 84% of these companies had ratings of ‘Caa2’ or lower, which indicates obligations that are subject to very high credit risk.”

According to Bloomberg’s database, 19 of the 27 bankruptcy cases that have been filed in U.S. courts over the past 12 months in which the filing company had liabilities in excess of $500 million have come from the oil & gas industry. Those 19 filings entities combined for $44.3 billion in liabilities. Another 4 of those cases are coal companies, with combined liabilities of $28.7 billion.

Natural gas futures on Monday advanced for a seventh consecutive session as robust domestic cooling demand and strong liquefied natural gas (LNG) export levels continued to drive up prices that are at their highest levels since 2018. The August Nymex contract advanced 4.2 cents day/day and settled at $4.102/MMBtu. The prompt month gained nearly 11%…