Linn Energy LLC and LinnCo LLC are acquiring Berry Petroleum Co. for $4.3 billion, including debt, in a transaction said to be the first-ever acquisition of a C-corporation by an upstream limited liability company (LLC) or master limited partnership (MLP). 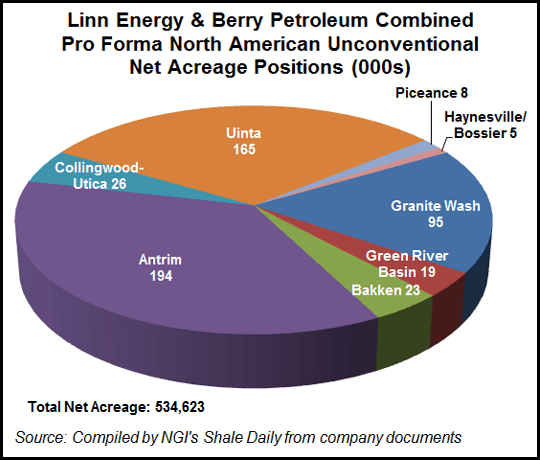 The companies said Berry’s “long-life, low-decline, mature assets are an excellent fit for an MLP/LLC” and will bring “meaningful growth” to Linn’s portfolio, adding a geographic presence in California, the Permian Basin, East Texas and the Rockies, as well as a new core area in the Uinta Basin.

“This transaction creates tremendous value for Linn Energy, LinnCo and Berry equityholders,” said Linn CEO Mark E. Ellis. “Berry’s assets are an excellent fit for Linn, and we believe this transaction generates significant accretion to our distributable cash flow per unit.” Ellis said Berry employees are an “important part of” the deal and would be welcomed to Linn. The combined company is to be headquartered in Houston.

During a conference call with financial analysts, Ellis said the nature of the Berry properties makes the deal “a great fit.” These attributes include their decline rates and upside potential. The only place where Linn and Berry have common ownership is in the Permian Basin, where they are both active in the Wolfberry play, Ellis said.

Ellis said Berry’s California assets are especially attractive. In California Berry is engaged in steam flood oil recovery in the San Joaquin Basin. “The California assets are a very nice addition, and not just the properties but the technical knowledge that that organization has,” he said. “They’ve been in business out there for over 100 years, so there’s a tremendous amount of technical talent there. The knowledge of those plays is extreme. We have a small piece of operation in California, so this is a very big addition for us.” By doing a C-Corp. acquisition, Linn is acquiring talent as well as assets, Ellis said. Berry’s use of natural gas for steam flood operations provides a natural hedge for its gas production, Linn executives said.

Linn has core focus areas in the Midcontinent, Granite Wash, Permian Basin, Hugoton Basin, Rockies, Michigan, California and East Texas with about 15,000 gross productive oil and natural gas wells. The Granite Wash and Permian Basin are seen as key growth areas, according to the company.

Berry traces its roots to California where it began producing heavy oil from the San Joaquin basin in 1909. In 2003, Berry added the Uinta Basin in northeastern Utah, which has seen a resurgence of activity of late.

“Berry’s portfolio fits well with Linn’s structure and asset base, and the combination of the two companies will create one of the largest independent E&P [exploration and production] companies in North America,” said Berry CEO Robert Heinemann. “This transaction consideration delivers substantial value to Berry shareholders with the opportunity to participate in the upside potential of the combined, growing company.”

Ellis said that for this year there won’t be any meaningful integration of the companies’ capital programs. An optimized capital program for the combined company won’t emerge until next year, he told analysts.

The deal is structured as a stock-for-stock merger of Denver-based Berry with Houston-based LinnCo followed by the acquisition of the Berry assets by Linn and is expected to be tax-free to Berry shareholders.

Last October, Linn launched LinnCo to finance growth and open the door to C-Corp. acquisitions. The $1.3 billion transaction was the largest E&P initial public offering of all time, Ellis said Thursday. “As we stated last quarter, we believe LinnCo is a game-changer for the company, underscored by today’s very significant acquisition announcement.”

After the launch of LinnCo, Berry (BRY) was among the companies considered to be a potential acquisition target of the new entity, Wells Fargo Securities analysts wrote Thursday. Also considered potential targets were Newfield Exploration Co., Forest Oil Corp. and Kodiak Oil and Gas Corp., Wells Fargo said. “…[B]ased on our client conversations, [Wall] Street would have put BRY as least likely of those four.”

The Wells Fargo analysts said they viewed the LinnCo transaction as unique and they don’t expect other MLP purchases of C-Corps. Ellis said Thursday that Linn had been looking at a lot of different opportunities, C-Corps among them.

Linn CFO Kolja Rockov said the creation of LinnCo also opened the door to the company for institutional and retail investors by offering them a simpler way to take a stake in Linn Energy. “But today, as further evidence of the strategic significance of the IPO, today we have unveiled a structure that allows Linn to acquire C-Corps with a tax-free exchange of shares that does not trigger an immediate payment of tax.

“During our company’s history, we have made 57 acquisitions totaling approximately $10 billion, which has resulted in distribution growth of 81% since our IPO in 2006. But today we have broken new ground…Just like mature oil and gas assets belong in an MLP, we believe C-Corp.’s with mostly mature assets also belong in an MLP.”

The all-stock deal also brings “material improvement” to Linn’s debt metrics, Rockov said. “Debt to EBITDA [earnings before interest, taxes, depreciation and amortization] for the second half of the year is expected to be approximately 3.6x,” he said. “In addition, we expect our greatly expanded size to also be viewed as a credit positive.” When asked, Rockov said credit ratings agencies had not yet weighed in on the deal.

During the conference call, Rockov brought up a recent controversy over the company’s hedging practices and financial reporting as highlighted in a Barron’s article last Saturday that said, “…Linn may be overstating the cash flow available for distribution, by not deducting the cost of financial derivatives — mainly put options — from its realized gains on hedging activities in its quarterly results.”

Rockov said the company has addressed the concerns in an explanation posted to its website last Friday and in an 8k filed with the Securities and Exchange Commission. “We firmly stand behind not only our hedging strategy but also the validity of our financial statements,” he said. Said one analyst on the conference call, “I’m going to go cancel my subscription to Barron’s now.”

LinnCo has agreed to issue 1.25 common shares for each common share of Berry outstanding prior to the merger. The consideration to be received by Berry shareholders is valued at $46.2375 per Berry share based on LinnCo’s closing price as of Feb. 20. This represents a premium of 19.8% to the Berry closing price on Feb. 20 and a premium of 23.1% to its one-month average price.

The acquisition is expected to be tax-free to Berry shareholders. Berry is to be converted into an LLC. Upon completion of the merger, LinnCo will contribute the Berry assets to Linn in exchange for Linn units. The transaction is subject to approval by Berry and LinnCo shareholders and unitholders of Linn, as well as customary closing conditions, including antitrust clearance. Closing is expected by June 30.