Despite global plans to reduce the sulfur content in marine transportation fuels by 2020, limited infrastructure and high development costs initially may prevent vessel operators from switching to liquefied natural gas (LNG) as a fuel source, according to the Energy Information Administration (EIA). 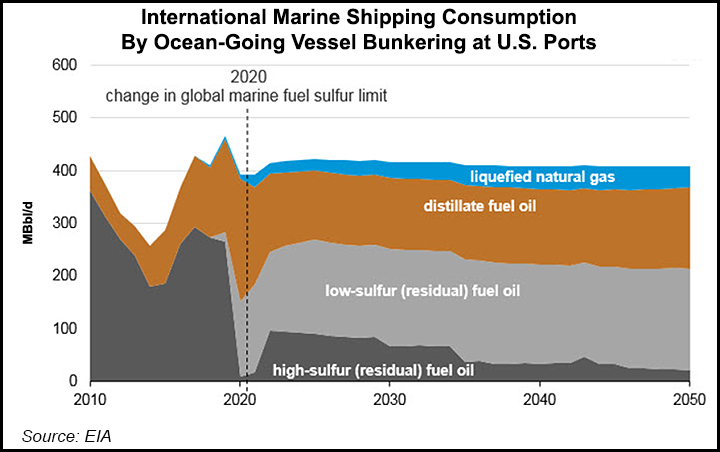 EIA said shippers will face additional uncertainty at the hands of the International Maritime Organization (IMO) because the group has signaled its intention to implement additional regulations for marine fuels after its initial plans take effect on Jan. 1, 2020.

According to EIA, IMO initially proposed limiting the sulfur content in marine fuels to 0.5% by weight in 2008. Eight years later, IMO reaffirmed plans to implement the 0.5% target at the start of 2020. The agency said the current limit of 3.5% was established in 2012.

Vessel operators have several options for complying with the IMO 2020 rules, EIA said. They could switch their ships to lower-sulfur fuels, install scrubbers to remove pollutants from ships’ exhaust or switch to non-petroleum fuels such as LNG.

EIA said projections from the Short-Term Energy Outlook (STEO) and the Annual Energy Outlook 2019 (AEO2019) point to limited use of LNG as a bunker fuel, the fuel mix consumed by large ocean-going vessels, in the early days of the IMO 2020 limits.

“Outside of residual fuel oils and distillate, STEO forecasts that the use of LNG in marine bunkering will be limited through 2020,” EIA said in an 18-page report released Wednesday. “Similarly, the AEO2019 reference case projects limited use of LNG in the next five years, reflecting the high initial infrastructure development cost and the limited current infrastructure to accommodate LNG bunkering at U.S. ports.

EIA said that over the past several years, many new ships were either built with, or were offered to be equipped with, LNG-ready engines. Such engines would be configured to run on LNG at a later date, the agency said.

“However, very few vessels consume LNG as their primary fuel, and the infrastructure to support LNG as a shipping fuel is currently limited in both scale and availability,” EIA said.

The agency added that IMO imposing additional limits on marine fuels in the future could cause uncertainty for vessel operators.

“These future regulations may result in shippers switching to alternative non-petroleum fuels such as LNG. Because of this uncertainty, refiners and shippers may be hesitant to invest in complying with IMO 2020 if additional IMO regulations in the future could cause those investments to lose value or no longer be needed.”